Athletic Upgrades Keep Student Athletes at the Top of Their Game 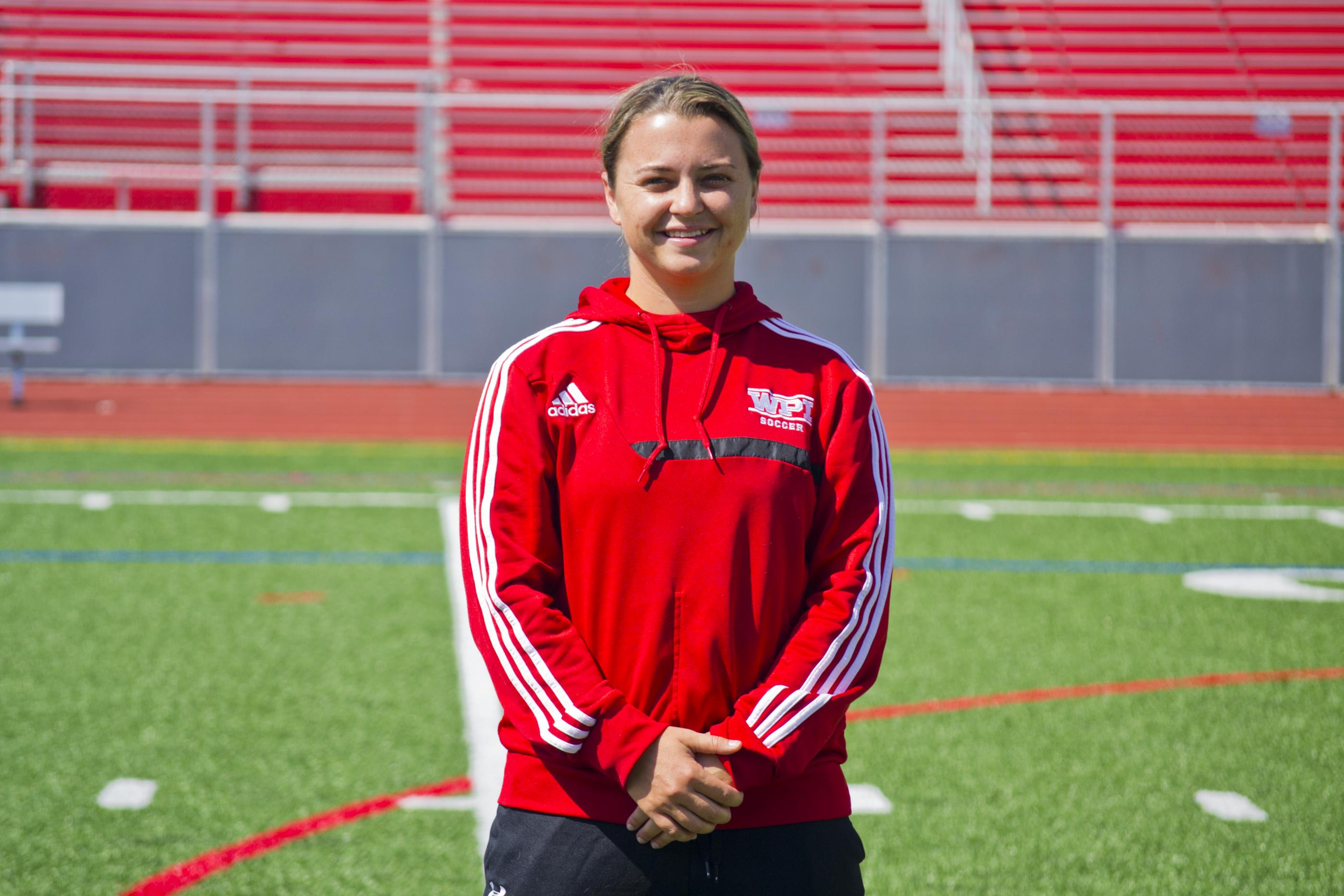 Head women’s soccer coach Stephanie Schafer
said that training on the refurbished “carpet”
day in and day out helps WPI’s athletes become
familiar and comfortable on it, giving them that
“home field” advantage.

Soccer cleats, basketball sneakers, lacrosse sticks, and even shoulders and knees do a number on WPI’s athletic fields and courts. But with a regular schedule of maintenance and upkeep, WPI keeps its student athletes playing on top-notch surfaces.

This summer both Alumni Field and the Harrington basketball courts received major upgrades, expertly planned by the Facilities and Athletics departments to avoid disrupting the annual camps and events.

“The trickiest part of the upgrades is identifying what needs to get done and when, and then scheduling that,” says Bill Spratt, director of facilities. “All of the facilities get used almost all the time.” But upkeep is essential. “It’s about being able to use the investment and using it to the fullest,” he says.

“The immediate benefit is that our fall teams get to play on the best turf surface available.” – Stephanie Schafer, head women’s soccer coach

Alumni Field, with its exposure to weather and rough shoes, was getting to the end of its useful life, says Spratt. So this summer the five-week process began. The field was shut down while the old playing surface, both the turf grass and the sand and recycled rubber infill, was removed. “Essentially, it’s like replacing carpet,” he says. The grass turf (three-inch blades of fabric grass) sits on a layer of stone that provides drainage and the infill material is layered on top to fill in between the blades of grass. The combination gives the field a nice bounce for players.

But replacing the field means the turf “carpet” and the infield filling have to be mechanically separated. Then, a new turf layer is placed down in strips, which are sewn together with a hand machine. New (and brighter) material for the WPI logo and for the lines for each sport are sewn in as well. The infill, which had been stored in enormous plastic sacks, is then reapplied.

What’s the difference? “The immediate benefit is that our fall teams get to play on the best turf surface available,” says Stephanie Schafer, head women’s soccer coach, “and we get to train on it day in and day out, become familiar and comfortable on it to give us that home field advantage.”

A good surface also protects the athletes. “This turf is top of the line, which means it’s the best on the market in terms of how ‘true’ the ball will play and its ability to hold up in unfavorable weather. It’s the best in injury prevention,” says Schafer. 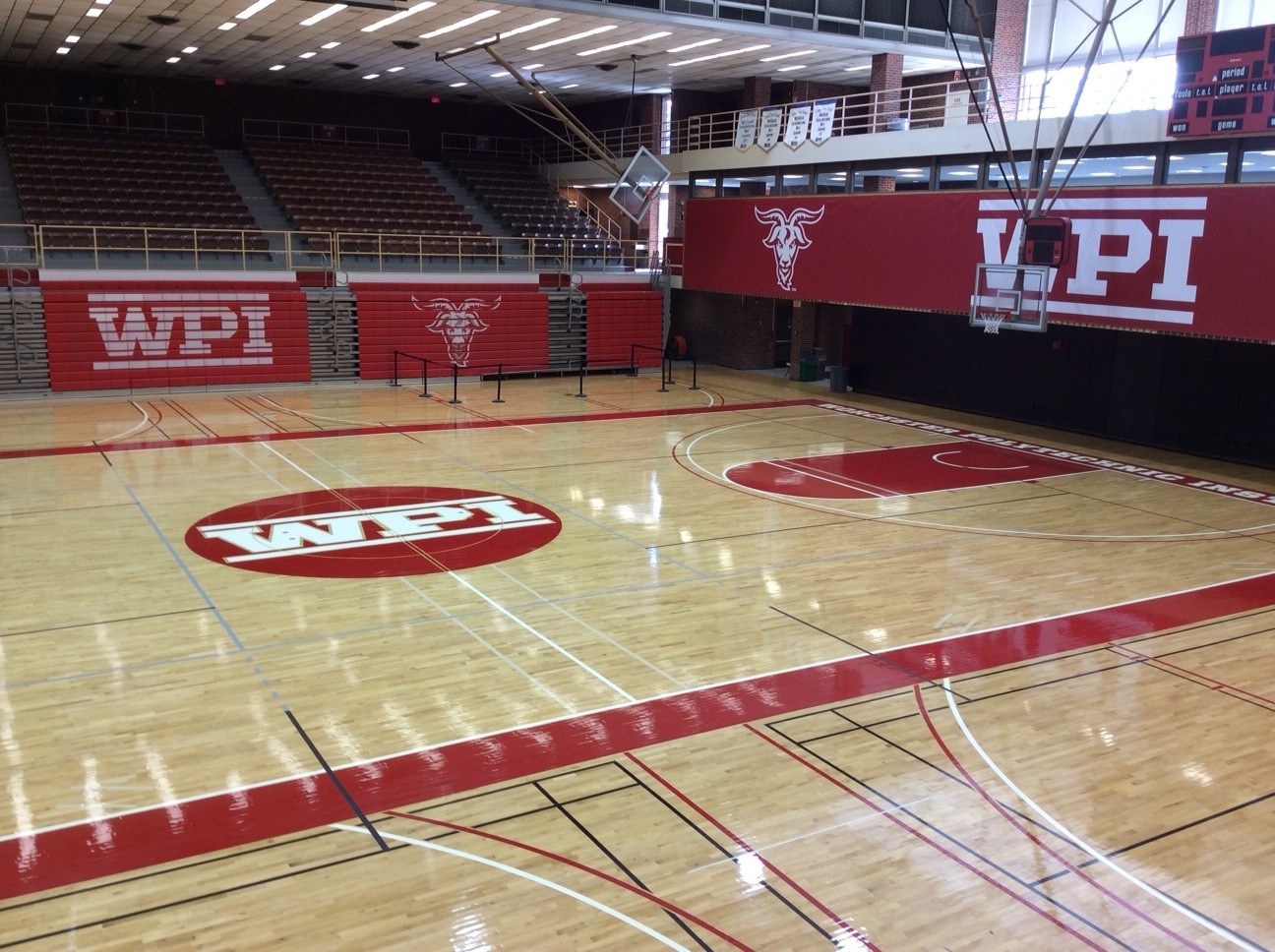 “The refinishing protects the wood floor,” says Spratt. While the layers of urethane finish offer protection and make the court look nice, the heavy-duty work fixes any dents or dings.

While sanding is the bulk of the work, the layers of urethane and paint (for the lines and the logo) have to dry completely. For every urethane finish coat, the court needs a full 24 to 48 hours to cure and harden. After the final application, the varnish has to remain untouched for almost two weeks before it can be used.

For the athletes, knowing WPI is investing in them helps their game. “The new upgrades to alumni field are awesome,” says senior mechanical engineering major and men’s soccer captain Eric Crevoiserat. “The turf on the garage field mirrors that of the turf on Alumni Field, making it consistent from practices to game days in the stadium. The athletes in general get excited about any athletic facility improvement, as it shows the commitment from administration to continue to improve and support the great athletic teams we have on campus.”

Spratt and his team like knowing the facilities are the best for the athletes. “I just hope they have a great playing experience,” Spratt says.