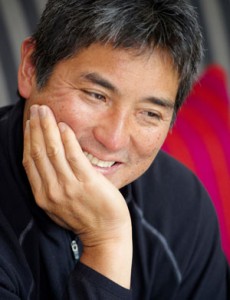 The Venture Forum (TVF) chairman and WPI alum Mitch Sanders says his only regret about having “first Apple evangelist” Guy Kawasaki come speak on campus is that he didn’t extend the invitation 10 years ago. “Guy is a captivating speaker and I have been following his career progress since his chief evangelist days at Apple Computer,” he says.

ECI Biotech was one of the first companies to apply for an investment from Garage Ventures, a seed and early-stage venture capital fund founded by Kawasaki and others in 1998. The Venture Forum program, Getting Your First Investment today, Tuesday, June 10, from 5:30-8:30pm, at the Campus Center, will feature Kawasaki as a virtual keynote.

The event is significant for a few reasons, says Sanders, who is serving his second tour as TVF chair.

“Guy is a marketing luminary with 1.4 million followers on Twitter,” he says. This event is also the first time TVF reached out to a speaker on a national level. “It shows how we are expanding,” and bringing such notable entrepreneurs and their messages to WPI and other venues in across Central Massachusetts, he says.

Kawasaki, a best-selling author of 10 books, is now chief evangelist at free online graphic design service Canva, based in Australia. He has served as advisor to the Motorola business unit of Google.

“I [happened to] fall in love with Android, and I love smartphones so the challenge to help Motorola compete with Apple and Samsung was irresistible,” he explains on his website. Kawasaki’s books include APE, which explains how to self-publish books by being author, publisher; and entrepreneur. What the Plus! Google+ for the Rest of Us; and Enchantment, a book on how to influence people’s behavior, ethically. He has a bachelor’s from California’s Stanford University; an MBA from UCLA and an honorary doctorate from Babson College in Waltham.

“He’s the quintessential marketeer,” Sanders says of Kawasaki. “He gives common-sense advice to entrepreneurs. For example, he has a 10:20:30 rule for [venture capital] presentations: 10 slides, 20 minutes, 30-point font. (See more at https://www.youtube.com/watch?v=-M13SObffog)

The session — co-moderated by Mitch Sanders and Deirdre Sanders (no relation), of intellectual property law firm Hamilton Brook Smith Reynolds (HBSR) of Concord and Boston — will include ample time for audience questions. Attendees can direct their question to a participant and submit them ahead of time at mitchsandersphd@gmail.com, or they can ask questions live to either Kawasaki or members of the expert panel. The panel is composed of Mark Solomon, principal of HBSR; John Hession, senior counsel in venture-capital financings and emerging companies at Cooley LLP; Brian Dingman, co-founder of Dingman, McInnes & McLane; Rick Powell, senior vice president of Greenberg, Rosenblatt, Kull & Bitsoli; Michael Greeley, general partner of Foundation Medical Partners; and John Redding, chairman of Capital Alliances LLC.

In addition Tuesday’s session includes time for networking — at a wine and cheese reception — and awarding of the Annual TVF Leadership Award to Richard Prince, who has served the forum for 20 years. Sanders says it’s an exciting time for TVF, which has filed paperwork as a non-profit 501(c)3 educational organization and expects exemption status soon. He says more than 200 attendees are expected at the Kawasaki event and seats are filling up fast.