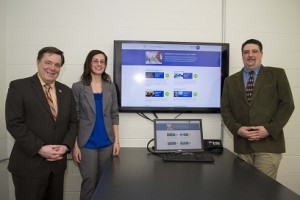 The Foisie campaign stands out, EverTrue said, because it encourages alumni and other members of the WPI community to indicate which campus groups they’re affiliated with, such as Greek organizations or sports teams, when they donate. This information feeds into a “Top Donors” ranking on the home page that shows which campus groups and class groups have risen to the challenge.

So far the campaign has raised more than $215,000 for the studio, a physical hub for the kind of engineering, business, and entrepreneurship collaboration for which WPI is known.

Peter Thomas, executive director of Alumni Relations & Annual Giving, says that while he is pleased that WPI would be included in this list, “I am delighted by the company we’re in.”

The EverTrue list included successful higher ed programs such as those from Middlebury College, UCLA, Carnegie Mellon, and Cornell. Thomas says his department had studied Middlebury, which has been at the forefront of higher ed crowdfunding, as a model for how to include a similar platform in the WPI advancement mix.

Fortuitously, about the time WPI was looking at how to launch the Foisie campaign, a young alumnus, Kevin Monahan ‘05, approached the advancement office about a start-up, Alumni Fund, that he is involved in. By partnering with this new company, WPI was able to develop a crowdfunding platform tailored to its needs, rather than adapt to a pre-created platform, says Thomas.

“Working with Kevin allowed us to build a back end that would let donors choose an affinity group,” rather than identify strictly by class, he says. Although alumni do identify with their class, it’s not always the strongest affinity, he says.

In the Foisie fundraiser, anyone who donates more than $25 is allowed to identify with an affinity group and the groups are recognized on the home page. This element of the program has sparked social engagement and friendly competition among groups and elicited contributes at all levels—exactly the type of involvement that makes the crowdfunding model successful.

Thomas notes that the Foisie crowdfunding campaign has been a campus-wide effort, involving everyone from alumni and advancement department staff to faculty and students who helped create videos showing how the Foisie studio will benefit the WPI community. In particular, he called out his partners in the effort: Cheryl Cerny, sr. director of Advancement Information Management & Research and Scott Hadley, manager of Integrated Media.

Additionally, Alumni Association president Myles Walton ’97, leaders in campus affinity groups, and faculty have reached out to alumni, and even current students have joined in. The campaign went viral when one alum challenged others in his group with an offer to match their donations.

Thomas says the breadth of participation on this effort is “very much the heart of who we are.”