Songs for the Earth

Master Singers of Worcester to perform Songs for the Earth 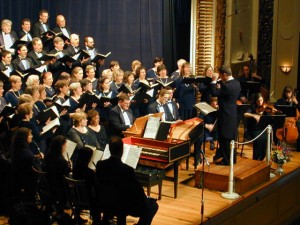 It’s a celebration of spring with a special seasonal show called Songs for the Earth. It happens this Sunday at Mechanics Hall with a WPI professor and students, as well as more than 100 singers and musicians involved. The poster for the concert states that “the Master Singers dedicate this concert to raise awareness of the environment and the fragile planet entrusted to our care.”

The concept of the program can be attributed to former WPI music faculty member Malcolm Halliday, a pianist, and the artistic director of the Master Singers of Worcester. “I love to create programs with a unifying theme, and, of course, the environment and climate change are both such relevant topics nowadays,” he says. “This is the first time for me to do an environmentally themed program though some of these pieces I have done before.

“I had scheduled the Benedicite of Andrew Carter a few years ago, and the emphasis on the natural world with all of nature in praise of the creator seemed a good starting point for an entire program called Songs for the Earth. I also conducted the Brubeck work, Earth Is Our Mother, last year, and knew it would be a perfect fit for this concert at Mechanics Hall.”

In addition to his direction, Halliday will be involved with a host of responsibilities. “I will be conducting both the Gwyneth Walker settings of Thoreau (To Love This Earth) as well as the Andrew Carter Benedicite, which is the biggest work and will close the concert.
“I also will be singing tenor for the Brubeck work, which will be conducted by Douglas Weeks, as well as playing piano for the Darius Milhaud ballet. Incidentally, though originally the publicity has stated that we would do only a portion of the ballet, we have now decided to do the entire work—it seems to be such a well-integrated piece that leaving out part of the work would not be as effective.”

Halliday admits that Songs for the Earth is an ambitious program involving a great deal of moving parts. “We do have daunting logistics made worse this year by our epic winter weather,” he says. “The Master Singers is the only group in the program to be performing at least four of the five works, since the ballet is for orchestra alone. The Senior Choir of First Congregational Church of Shrewsbury is joining the Master Singers for the Brubeck, since it was the group that sang it last year. There are singers from several other churches, including First Baptist, Wesley United Methodist, and Trinity (Northborough).

Another attraction is the debut of Cherish the Home We All Share by Worcester composer Dorothy VanAndel Frisch. “Last year the Master Singers did one of Dorothy’s works,” Halliday says, “and when she found out about the theme of this year’s concert, she approached me to feature this new work written specifically for this occasion. The piece will utilize the historic Hook organ at Mechanics Hall. This instrument has recently undergone some major renovation so, happily, it will be in perfect shape for this world premiere.”

Mass Audubon president Henry George Tepper will present a pre-concert lecture, “Conserving Massachusetts Landscapes in the Era of Climate Change, Understanding the Past, Shaping the Future.”