Lee Sheldon, professor of practice in interactive media and video game design at WPI, once enthralled audiences in characters’ drama and action-packed predicaments as a television producer and scriptwriter for shows including Charlie’s Angels and Star Trek: The Next Generation. These days, he uses his knack for storytelling to engage audiences through video games, and teaches others how to do the same. 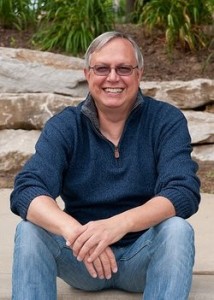 Earlier this month, during the European installment of the 13th Annual Games for Change Conference, he contributed his skillset to help address a serious topic: immigration.

“Immigration, Integration, and Self-Esteem Restoration: The Power of Video Games” was the theme of this year’s Games for Change Europe conference, held in Paris. Approximately 150 industry professionals, educators, immigration experts, students, and a former refugee, gathered for a meeting of the minds, focused on creating prototypes for games to mitigate the challenges of immigration worldwide by helping people empathize with immigrants and refugees, and helping immigrants and refugees assimilate.

Topics
Faculty
DEPARTMENT(S)
Interactive Media & Game Development
Mainstream culture still regards video games as being only violent or explicit, but what most people don’t realize is how video games are being used for good.

using games to address immigration issues is a new concept, but serious games—or applied games, as they’re referred to—are a fast-growing segment of the gaming industry, expected to reach $5.4 billion dollars by 2020. These types of games may be entertaining, but are designed to serve a purpose beyond pure entertainment, such as training or education. There are more people making serious games than there are making games that are purely for entertainment, Sheldon explains, providing examples of games that teach empathy to children with autism, games about AIDS, and games that address diversity and privilege.

“Mainstream culture still regards video games as being only violent or explicit, but what most people don’t realize is how video games are being used for good,” Sheldon says. “Video games can reach people in a way that is stronger than a movie they may see or a book they may read, because they’re in the middle of the story as a character. Giving people a stake in the outcome gives them greater understanding. That’s very powerful.”

“During the Games for Change Europe conference we wanted to use the power of games and apply that to an issue of significant concern,” he continues. “Immigration is a major issue, especially in Europe. We want to help everybody on all sides of it. We can’t just say, ‘you have to let in the refugees’ or ‘you have to conform to the culture you’re joining.’ We want everyone to have empathy for each other because that’s the beginning of understanding.”

Sheldon’s storytelling skills come into play through his ability to shape the way game players feel about situations and characters.

“The audience must care for the people we want them to root for and confront the villains—it’s something we do all the time in stories,” he says. “Like movies or books, games shouldn’t preach empathy, they should just create it. I’m not waving my finger at players saying you have to care about these other people. I want to put them in situations where they will.”

During the conference, Sheldon hosted a workshop titled “Empathy: A Two-Way Street to the Same Destination,” on designing role-playing games in which players experience empathy for immigrants and those who are faced with their arrival.

He also gave a keynote speech on a soon-to-be-released video game he wrote for Mi’pu’mi Games—“The Lion’s Song,” about the trials and tribulations of the creative process. In their presentation, Sheldon and Stefan Srb of Mi’pu’mi Games aimed to inspire the group to create engaging, meaningful games.

Several prototypes for video games resulted from the conference, including three from Sheldon’s workshop. One explores the friendship between a refugee and a guard at a refugee holding camp in Europe, and the struggles each of them has in understanding the other’s point of view. Another follows a single refugee traveling from their native country in search of a new home, seen through the eyes of all the people they meet along the way. The third game prototype follows a family of refugees from the moment they realize they must get out of their homeland through the entire process of moving to another country.

According to Sheldon, many of those involved in creating game-prototypes at this year’s Games For Change Europe plan to continue development of the game ideas. Follow-up conferences are tentatively planned for this coming fall and next summer. Sheldon will advise several groups as they continue to develop their games.

“The conference became a jumping off point for continued work on games addressing the immigration crisis,” Sheldon said. “First came the idea, now there is a direction and a concerted effort to produce solid solutions.”