Laurie Leshin’s message for girls: You can do anything

“I have a question for you—can girls do anything?” President Laurie Leshin asked the nearly 500 fourth- through eighth-graders who filled the basketball courts of the Sports and Recreation Center.

“Yes!” they chorused in response.

“Well, you can do anything!”

As the opening speaker at the “Geek is Glam” conference for girls on Saturday, Oct. 18, WPI’s new president shared the story of her own early fascination with space to urge them to follow their own interests—wherever they might lead.

When she was in the fifth grade, said Leshin, “I stood in my mom’s kitchen and saw pictures from Mars of rocks, dirt, and dust. I wanted to reach out and touch those rocks.”

Though her path didn’t take her directly to her career as a space scientist—“I was interested in a lot of stuff”—that moment of captivation stayed with her.

Eventually, she went on to work on the Mars rover, Curiosity: “She’s the rover taking selfies on Mars,” said Leshin.

It might be difficult to choose from many interests, but each of the girls in the enthralled audience will also find her own “one thing,” she promised, “and it could be space.”

Sponsored and organized by the Girl Scouts of Central and Western Massachusetts (GSCWM), the “Geek is Glam” conference targets younger girls to showcase the excitement of STEM education and research.

The girls attend a full day of sessions led by STEM professionals from area universities, organizations, and companies.

At this past weekend’s conference, the 125 presenters came from WPI, the Museum of Science in Boston, Mass. Audubon, Smith College, iRobot, UMass K-12 STEM Education in Science, Mass. Academy of Math and Science at WPI, and the Association of Women in Science, among others. 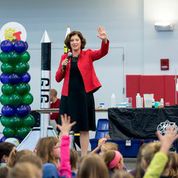 It was the second time that WPI has hosted the program, says Suzanne Sontgerath, associate director of admissions and coordinator of pre-college programs; her office and the Women’s Program helped make connections on campus for the event.

“It’s a pipeline for WPI,” she says. “Any time we can engage young girls in STEM, we’re on board.”

This year, 470 girls attended, up from 400 in 2013; it is not restricted to Girl Scouts, though many are Scouts. In addition, there were 50 volunteers from GSCWM, and 68 WPI students—primarily women—served as volunteers.

“Our students are fantastic role models for the girls,” says Sontgerath. “They see other cool girls interested in STEM.”

Indeed, in her remarks, President Leshin quickly pointed out the WPI women lining the back of the room.

“What do WPI girls do?” she asked. “They do science the way it should be done: all over the world.”

Describing a few of WPI’s project centers, from Namibia to Thailand, New Zealand to Worcester, she noted that “science isn’t just in the lab. Real STEM professionals are out in the world solving problems.”

As she concluded, Leshin asked the girls to consider WPI when they are older— thinking about college and ready to decide their own path.

In the meantime, she urged them to “Have fun, stay interested in space. One of you will probably be the first astronaut on Mars. Which one of you will it be?”

Every hand went up.

Asked afterwards why it was important for her to be there, WPI’s first female president smiled.