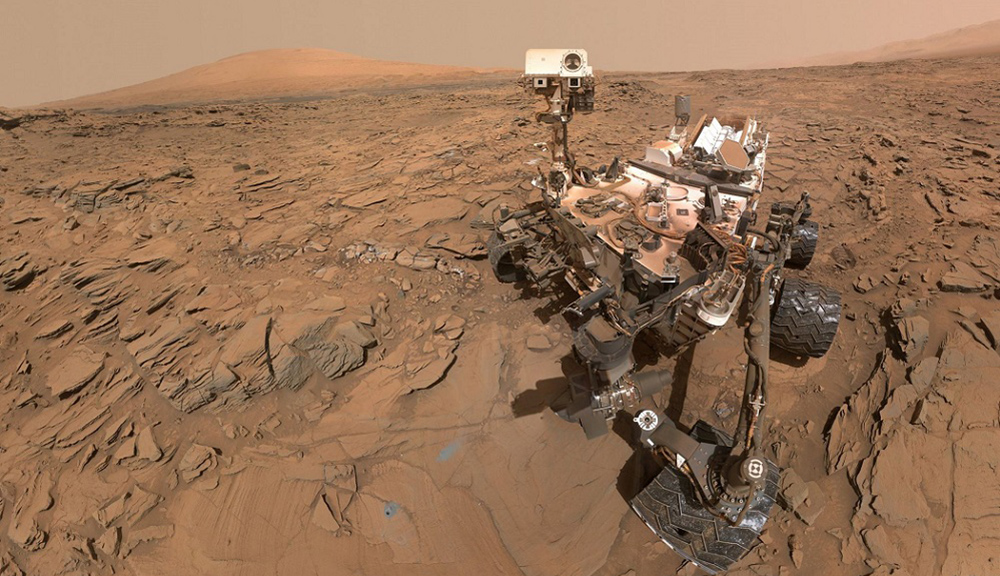 Before taking the helm at WPI in 2014, President Laurie Leshin, a geochemist and space scientist, had a passion for space and a lifelong fascination with Mars. Her professional career set her on a path to NASA where she shaped future human spaceflight programs and activities as the deputy associate administrator for NASA’s Exploration Systems Mission Directorate. She also held roles as the director of NASA’s Sciences and Exploration Directorate, and as the deputy center director for Science & Technology at NASA’s Goddard Space Flight Center.

Of her many accomplishments at NASA, her work on the Curiosity rover is a lasting point of pride. As the 5-year anniversary of Curiosity’s successful Mars landing on the night of August 5 (PDT) (early morning of August 6, EDT), 2012, approaches, the Daily Herd sat with President Leshin to reflect on Curiosity’s success, her own path to NASA, and what she sees for the future.

​Leshin foresees a time when humans will land on Mars and make rapid discoveries. “It takes a person 45 seconds to do what a rover does in a day,” says Leshin. “We have actually measured this. It’s so much more efficient with a human, but we don’t know how to do it yet. There are a lot of problems to be solved between now and then, but we will get there.”

What led to your interest and work with NASA?

I have very vivid memories of seeing the first photos of the surface of Mars from the Viking landers in Time magazine when I was a 10-year-old girl. I just remember wanting to reach out and touch those rocks. I was enthralled by them. From that point on, Mars held a huge fascination for me. So to get to be there on the very first night that Curiosity landed and see the Martian rocks from our own rover was just coming full circle.

Once I was in school I realized I wanted to work in space science, but there are many different ways you can do that and most of them don’t involve working at NASA. Being a university professor is a great way to be a space scientist, and I was doing that. I got called to NASA for some policy opportunities, to help contribute to the future direction of human space flight and to contribute to the way the agency was thinking about that. And then I got the chance to lead a very big organization there. I give NASA a ton of credit for bringing me here to WPI. Certainly, the biggest leap in my career was going from being a professor to leading a huge science organization at NASA.

What was your role in the development and deployment of Curiosity?

I was on the very first team that worked to define the science goals of this rover, and I was involved in two sensors of Curiosity that studied the chemical makeup of the materials on the surface. The bigger sensor is SAM (for Sample Analysis at Mars). SAM looks at volatiles and gases that are in soils and rocks.

In the beginning, I was a scientist on these two sensor instruments, but during the first couple of years, I played an operations role that was called a long-term planner (LTP). Every day the rover is operating, which for the first year, that was every day—and for the first 90 days that was on Mars time because the Mars day is a little longer than an Earth day—the tactical operations team is there. It’s like having a baby. You sleep when the baby sleeps, you’re awake when the baby’s awake. Each day, there’s a team to figure out what the rover learned yesterday, figure out what the rover is telling us, and figure out what we want it to do today. The team plans those observations, vets them, and makes sure they are appropriate. Then they uplink them to the rover for it to do the next day. The LTP looks a little beyond the tactical day to make sure you’re not just staring at whatever is right in front of you, but that you have the long-term goals in mind. There were about six of us and we would do three or four days in a row and then someone else would take over.

My biggest scientific contribution from Curiosity was the first paper that we wrote on the Mars dirt. We discovered a lot of water in the dirt, and some other things. The instrument is right inside the belly of the rover, about the size of a microwave oven. We'd drop a half a baby aspirin-size worth of dirt into it, an oven would heat it, the gases would come up, and we analyzed them. It was very exciting.

It wasn’t a surprise that there was water there, but the amount surprised me. It’s right there at the surface, probably anywhere you look on Mars, it’s there. It’s the amount of water you would find on the driest desert on earth.

Tell us about the atmosphere in the control room at NASA's Jet Propulsion Laboratory in California during the landing. Were there specific concerns over things that might go wrong?

It felt exhilarating. Everyone thinks the night of the landing is the beginning, which it is, but it’s also a culmination of a decade of work. It takes a long time to build these things. In the case of Curiosity, she was delayed two years. She was supposed to launch in 2010 but because of some technical challenges, we chose to delay to the next launch window to Mars—those windows come about every 26 months.

That night became all about the nights and weekends away from family, and all the hard work that thousands of people have put in to get us to this point. So it was huge exhilaration, and relief that it was successful. And there was so much excitement about what would come next. The night Curiosity landed it was August 5 on the West Coast at 10:30 pm [although the official Zulu time was August 6], which is my birthday. It was a great birthday present when we landed successfully.

I’ll tell you a story. I was a scientist and team media spokesperson on the Mars Polar Lander mission that launched in 1998. It was live on CNN when it landed and it crashed. We were waiting for the signal, ready to jump up and down, and … nothing. Of course, there are a lot of different reasons you might not get a signal at landing, and it could still be fine. For the next four days we were trying to see if the lander survived. It was awful.

So for Curiosity, I was nervous. I have been there and I know what it’s like when it doesn’t work, and it’s way more fun when it does. The landing system on Curiosity is a bit wild. They call it seven minutes of terror because it is going from 13,000 miles per hour when you hit the top of the atmosphere to zero when you land on the surface in seven minutes. All the things that have to happen in that time are terrifying, and there’s nothing you can do because it’s all happening automatically. When you are getting the signal, it already happened 10 minutes ago because of the light travel time.

Immediately after the landing, we ran across to the operations center and started working. Because now the rover is on Mars. You’ve got to make sure it’s safe and figure out where you are, and figure out what you are going to do first. We all worked that whole night and basically every night after for a very long time.

Has the rover performed to expectations? Any unplanned-for complications?

She’s done very well. We have had a few glitches, but that’s expected since she is driving around on a real planet. Most of the challenges we have had are on the drill, but they are working on that. Her wheels wore more intensely than we thought, but we are dealing with all that. The amazing thing is if you have a rover that’s working on Mars you can deal with almost anything—just to see how the team comes together to work on almost any problem. Think Apollo 13—that’s the extreme example of how people came together to try to figure out how to work a problem. The engineers are incredible—they can figure out a work-around for almost anything.

How have you remained active on the Curiosity team, and what is your role?

I am technically on the team. I have been staffed as an LTP for three days since coming to WPI just to prove I could be a college president and drive a rover on Mars at the same time. And I did it. And I have done it when people needed me to fill in for one day, but I am no longer able to do three days in a row. I am still very much in touch with colleagues. There are a lot of younger scientists on the team and they need to get their chance to step in and shine so I am happy to have others step in.

What can higher ed do differently to support the exploration of the solar system and beyond?

WPI’s focus on interdisciplinary programs and project-based learning is very much in line with what’s needed to train the next generation of explorers. The scientific problems we are solving on Mars are very multidisciplinary and the engineering problems are certainly multidisciplinary. It’s very much about systems thinking and approaches and teaming, and being able to jump in and solve a problem quickly and to assess a situation and start to move toward solutions. This stuff isn’t theoretical. This rover really is on Mars. You can’t send a mechanic up to fix her, so you have to work problems in creative ways. So I think our whole approach to educating scientists and engineers is very much in line with what NASA needs for the future.

Would you want to go to Mars?

I’d love to do it. The idea of setting foot on Mars would be extraordinary. That would be the childhood dream come true. I’m too old, but I think our students could have that chance, and I look forward to being right there cheering them on.

For more information about Curiosity, visit NASA's Mars Mission page and NASA's Jet Propulsion Laboratory page. You can follow the mission on Facebook and on Twitter.