A charitable foundation hopes recipients of its latest youth awards will help spread the word about the grants and broaden next year’s applicant pool. 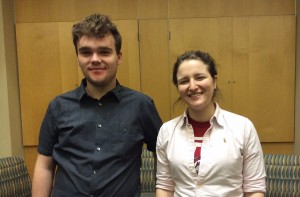 The Kurt Giessler Foundation for Youth Achievement was formed by Giessler, a high school engineering teacher working in Hanover, Mass., before his death in 2012. The forming of the foundation was announced by Massachusetts Senate President Therese Murray at his memorial service.

“He wanted to pass something along,” Bozek says.

Bozek now serves as the foundation’s marketing chair. The two met as members of their high school robotics team. About 20 people—Giessler’s parents, family, and friends—volunteer with the foundation, including WPI aerospace program grad Jim Partridge ’02 (PhD).

The foundation’s mission is to provide grants to youth between 12 and 20 years of age for a self-directed project. It doesn’t have to be engineering-related, Bozek says. But it must be inspired, independent work that is separate from school. As mentioned on the foundation’s website, www.kurtgiessler.com, “Initiatives can be of various natures, including inventive, entrepreneurial, charitable, or explorative research, but cannot be school-related.”

These young people can be tough to find, says Bozek, as teachers don’t always know what students are doing or interested in while they’re not in the classroom. “Some kids may keep to themselves,” he notes.

Devon Bray ’17, of Yarmouth, Maine, the winner of this year’s Ambition Grant, learned of the grant offering from a mass email sent to the WPI Photography Club and he applied. His project, PiPlanter, automates plant growth using an embedded computer to monitor things like light content, temperature, and soil moisture, creating a uniform growing environment.

“I like the idea of using a computer to complete mundane or repetitive tasks,” Bray says, and plant growth was a natural starting point for this project, now in development, with help from the $1300 foundation grant. “Growing plants is fundamentally simple,” he says. “All you really need is water, light and time.” Bray said PiPlanter automatically shows data graphs over various time intervals, documenting progress.

Katie Picchione ’16, of Albany, N.Y., won the foundation’s 2014 Prize for Achievement for her work in bringing potable water to villagers in Guatemala, harvesting rainfall with Engineers Without Borders. She plans to use the $1,000 to go back to Central America to build more systems. “My double major in mechanical engineering and society, technology, and policy has prepared me well to look at the project holistically,” she says, “considering the social implications and cultural appropriateness of the technology we work with.”

The premise of the foundation—and a quality both Bray and Picchione possess—says Bozek, is “if you invest in people, they will go out and solve real problems.”

However, Bozek says, the foundation is looking to attract more submissions. He’s looking to spread the word that these grant awards are open to any young person, and projects don’t need to be technology-related. Arts projects and work in other fields are also welcome. Bozek hopes Bray and Picchione’s stories will spur more innovation—and more motivation. Both were honored at a foundation fundraising event at Southers Marsh Golf Club in Plymouth.

“The foundation has started an invaluable tradition,” Picchione notes. Bray agrees: “Seeing the work that the other winners had done was inspiring.”