This May, seven WPI students from the WPI Chapter of Engineers Without Borders USA were eagerly welcomed by dozens of familiar faces in the rural Guatemalan community of Guachtuq. Though the team had traveled to the mountainside region many times before, this trip was special. It was the first large-scale implementation of the team’s project: the construction of eight rainwater harvesting systems that will bring water security to the area’s 220 inhabitants.

“Everyone was so excited,” says Katie Picchione ’16, the EWB-USA WPI fundraising committee chair. “The team had conducted several assessment trips and even built two pilot systems in January, but this trip was the culmination of many years of planning.”

There is no plumbing nor municipal water in Guachtuq, and community members, usually women and children, must trek more than a mile multiple times a day to get water from a basin (called the finca), and carry it back uphill. During Guatemala’s dry season, February to April, the finca does not provide enough water, which can lead to fighting between families.

Over a two-week period, the team built rainwater harvesting systems for eight families, including the community’s midwife, a woman with five children whose husband works 15-day shifts, a widow, and two elderly couples. The systems collect rainwater that falls onto rooftops, and are designed so that the community members understand each part and can help in the assembly.

“Community members took the initiative during construction of their own systems and those of their neighbors,” says Picchione. “We learned that they are experienced in construction, and their innovative ideas—as well as motivation—were our sources of encouragement and drive as the project progressed.”

During their trip the team also interviewed community members and made improvements based on their pilot systems. For example, in order to avoid contamination from material on the roof that washes off each time it begins to rain, they added a first flush subassembly that catches and discards initial rainfall.

The team plans to build tanks for the remaining 25 families in the village over the next two years. Team members are responsible for raising most of the funds for the project themselves, and they receive no academic credit for their work.

“We don’t do this for credit or accolades—we do it because we love it, and because we believe that engineering is an excellent tool for helping people,” says Picchione.

EWB-USA WPI has also begun initiatives to extend their work both at home and abroad. Starting this fall, they will help 6th graders at Tatnuck Magnet School in Worcester construct their own water harvesting system to hold water for their community garden. The experience will provide building practice for new team members and teach engineering concepts to middle school students. 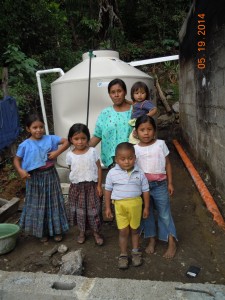 In April, several members of the team also took their project to the U.S. Environmental Protection Agency’s P3 program, a competition that challenges colleges to design innovations for a sustainable future for “People, Planet and Prosperity.” The team received an honorable mention and, more important, broadened their thinking about possibilities for the project.

“The competition really challenged us to think outside the borders of our project,” says Picchione. “A system like this could readily be used in so many other regions of the world, and could be built from diverse materials that are available. It’s really such a simple way to make a big difference.”