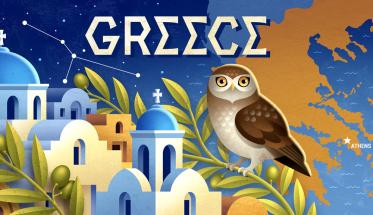 When WPI trustee Daniel Morgan approached the university about establishing a project center in Greece, the country was six years into its financial crisis and suffering high unemployment. The economic climate would offer students opportunities for real-world problem solving while learning sensitivity to a foreign culture. That’s the kind of lesson you just can’t get in the classroom, says Devon Bray, who in 2016 was among the first group of students to travel to Greece for their Interactive Qualifying Project (IQP).

“That was a critical learning,” says Bray, who graduated last spring with a bachelor’s degree in electrical and computer engineering. “The conversations always went better when we were coming from a place of ‘we’re trying to learn about your culture rather than we’re trying to build something that we think you want.’”

Interdisciplinary & Global Studies instructor Robert Hersh was running the Sustainable Food Systems Project Center on campus when Morgan first raised the idea of a project center in Thessaloniki, Greece’s second largest city. Morgan has ties to the American Farm School in Thessaloniki and proposed that WPI partner with its Perrotis College of Agriculture, Environment, and Life Sciences. With Hersh’s work in food systems, and the Greek financial crisis inspiring young people to return to their agricultural roots, it seemed like a natural fit.

“The conversations always went better when we were coming from a place of ‘we’re trying to learn about your culture rather than we’re trying to build something that we think you want.’”

Two groups of students have traveled to Thessaloniki for their IQPs since the spring of 2016. The focus has been on issues around urban agriculture, developing artisanal food products, and identifying export opportunities in the US for traditional Greek food products such as wine and olives.

Students are looking at critical questions in projects, even though their time is short in the country. Hersh explains, “We don’t see them as one-off projects; we’re looking at them as 5- to 10-year projects.”

Bray and his three IQP teammates studied urban gardening. There isn’t a lot of spare land in Thessaloniki, but virtually every apartment unit includes a balcony, totaling many acres of growing space. The group investigated the viability of hydroponics—raising crops without soil—on the balconies. They gauged interest and collected information by interviewing residents—some they met through contacts at the American Farm School; others they approached on the street or in businesses. It was “super intimidating,” Bray says, until the students embraced their status as outsiders. With data and 100 hours of interviews, the team designed three different balcony hydroponic systems.

“To be able to do this effectively, we had to have a somewhat comprehensive knowledge of the current state of affairs,” he says. “We had to have the social science behind the engineering to build something that people would actually want and will use. It seems obvious now but it’s not something that we, at the time, realized.”

Electrical and computer engineering major Veda Booth ’18 and her teammates came away from the Thessaloniki Project Center with a greater confidence in their ability to work well under pressure. When they arrived in Greece, they learned that a staff change there meant their project would shift from researching the feasibility of crop-health sensors in small gardens to surveying residents about the city parks. They were forced to scrap the painstaking work they had completed back home and start fresh.

The team rose to the challenge, according to Hersh. Booth says the experience, while stressful, was invaluable. She and her teammates learned to work under pressure despite their different backgrounds, majors, and personalities. And they were able to do it in an entirely different culture.

“Although it was a little bit difficult, it was a good experience understanding what it’s like to work on projects in the real world,” she says. “With jobs, sometimes things don’t go as planned and you have to make changes without getting too stressed out. It was, honestly, probably one of one of the best experiences I’ve had in my life.”