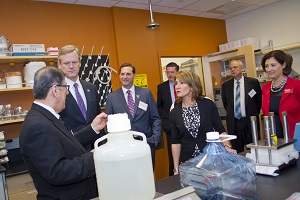 Kamal Rashid, director of the BETC, explains
equipment and training programs to Gov. Baker, Lt.
Gov. Polito, President Leshin and others during a tour.

• On his first full day in office as the 72nd governor of Massachusetts, Charlie Baker visited WPI to learn about some of our pioneering programs and hear from a panel of local leaders about the strong track of academic and industry collaborations in central Massachusetts.

Baker was sworn in yesterday afternoon at the Massachusetts Statehouse in Boston along with new Lt. Governor Karyn Polito. Over the past several days they have traveled around the state on a “Spotlight of Excellence” tour, which highlights programs that exemplify key tenets in Baker’s economic development plan.

Both had complimentary things to say about the work going on at WPI’s Gateway Park, and the Biomanufacturing Education and Training Center, in particular.

In response to a reporter’s question about the BETC and the development of Gateway Park, Baker said that “Educational institutions can play a significant role in economic development, especially in a knowledge-driven economy. … A big piece of why this project here at WPI works is that WPI brings a certain kind of knowledge to this exercise that can translate into traction. We’re going to see a lot more of that going forward.”

In speaking to a gathering of invited guests and a panel of education and industry leaders a little earlier, Polito, a Shrewsbury native, said she would like to see the successes here repeated in other areas of the state.

“We want to build on successes, and that’s exactly the spotlight we’re making today here at WPI in this wonderful center,” she said. “The particular site where we’re situated at this moment was a brownfield, and this many years later has transformed into a true economic engine in a very bright spot here in central Massachusetts that we hope to replicate and bring to other areas of the state.”

The duo came to WPI’s Gateway Park to learn about our unique biomanufacturing training program, as well as other initiatives that are spurring job creation and entrepreneurship in Massachusetts. Baker’s economic plan, “Great Again Massachusetts: A New Direction for Prosperity,” seeks to create a climate for economic growth by supporting small business and entrepreneurs, tying education with workforce needs, and bolstering our already thriving life sciences industry. 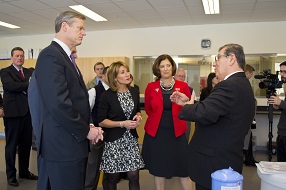 Kamal Rashid, director of the BETC, explains how
the center helps companies train their own and
potential employees.

Baker and Polito arrived at Gateway Park at 1:35 p.m. and were greeted by WPI President Laurie Leshin, who took them on a tour of WPI’s Biomanufacturing Education and Training Center (BETC). They were joined by Kamal Rashid, director of the BETC, and Stephen Flavin, vice president of Academic and Corporate Development at WPI.

Rashid gave an overview of the BETC’s impressive facilities and equipment, including its pilot biomanufacturing suite, which enables clinical scale manufacturing. Flavin explained how the BETC offers unique opportunities for industry and academic partners to collaborate.

Launched in April 2011, the BETC is a 10,000-square-foot, pilot-scale, fully functional biomanufacturing facility. It provides a hands-on environment for training and education of workers in the biomanufacturing field, particularly those involved with biopharmaceuticals—medicines produced using engineered living cells.

WPI founded the center with support from the Massachusetts Life Sciences Center to help meet the growing demand for skilled biomanufacturing workers and accelerate innovation in life sciences in central Massachusetts. The center also increasingly serves as a lifeline for displaced workers looking for job retraining.

To date, 22 companies have participated in BETC programs, including Biogen Idec, Genzyme, Shire, Abiomed, and ImmunoGgen. On January 7, WPI announced a new collaboration with AdvantaPure, a manufacturing firm based in Pennsylvania, that extends the center’s capabilities to help companies that supply equipment and solutions to biomanufacturers. 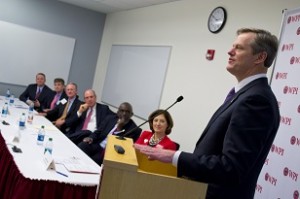 After the tour, Leshin formally congratulated Baker and Polito and also welcomed WPI alumnus Matthew Beaton ’01, a former Republican state legislator who was recently appointed as the Baker Administration’s secretary of energy and environmental affairs.

Leshin then thanked the gubernatorial team for selecting WPI among the stops in their inaugural tour.

“We think today’s theme – “Spotlight on Excellence” – beautifully exemplifies the innovation and creativity at this facility and on this campus,” she said. “Here at WPI we believe our goals are aligned with the state’s goal of furthering technology, biotech, and life sciences initiatives. We’re thrilled to be able to showcase some of that for you here today.”

Leshin went on to provide some background on Gateway Park, explaining that the Life Sciences and Bioengineering Center (LSBC), which opened in 2007, is a 125,000 square-foot facility that serves as the flagship complex at Gateway Park. The 50 Prescott Street building, in which the BETC is situated, opened in 2013 and serves a mix of needs and organizations. There are nearly 130 WPI employees and 300 outside employees spread over the two buildings.

Leshin also described how the success of Gateway Park was the result of collaboration among many sectors.

“It’s important for me to point out that none of this could have occurred without the vision and persistence of WPI leaders along with city, state and federal leaders nearly a decade ago,” Leshin said, noting that the complex had previously been a maze of abandoned buildings and contaminated properties.

She then spoke more about the BETC and how the unique facility meets the needs of the growing biomanufacturing industry as well as workers at all levels.

“The number of employees in the Massachusetts bio-pharma industry has increased by 40 percent in the last decade and is a huge economic driver in our region,” she said. “But we shouldn’t get too confident, because there are other regions where it is growing as well, and we need to continually up our game.”

She continued, “The BETC can customize programs for organizations so that their employees can gain critical new skills. It also offers programs to help laid off workers, or those workers who are shifting from one job to another to gain new skills.”

In closing, Leshin pledged to work with the Baker administration. “WPI will work closely with the Baker-Polito administration to share ideas and be an educational and practical resource for years to come in the life sciences, biotechnology, and biomanufacturing sectors,” she said. “We will also address industries’ needs for specific skills, and aim to strengthen the industry knowledge base. You can count on that, too.” 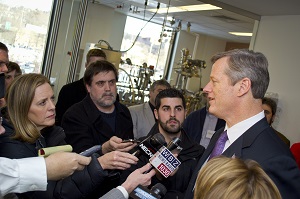 ​Leshin turned the discussion over to a leadership panel of area academic and industry experts, who spoke about how their organizations have facilitated and benefited from close collaborations among local colleges, businesses, and government offices.

Robert Johnson, president of Becker College, talked about how Becker’s MassDIGI program brings together college students and industry mentors, while Michael Collins, chancellor and senior vice president for Health Sciences at UMass Medical School, discussed how the medical school reaches out to young students to help create a STEM pipeline.

Kevin O’Sullivan, president and CEO of Massachusetts Biomedical Initiatives (MBI), noted that Baker has visited the life sciences business incubator at Gateway Park twice before and outlined his vision for future collaborations, saying he hopes to work together to “make Massachusetts the biomanufacturing center of the world.”

Next, Ted Marple discussed how MBI and other local partners helped him launch and grow his company, Blue Sky BioServices. Finally, former mayor and lieutenant governor Tim Murray, now president and CEO of the Worcester Regional Chamber of Commerce, summarized a sentiment expressed by everyone on the panel, saying, “collaboration is the hallmark of how and why Worcester has been able to achieve so much. We are blessed to have 35,000 students, a diversity of schools, and businesses that increasingly see the value of staying in Worcester.” 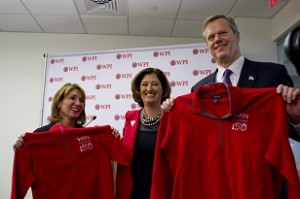 Baker offered a few remarks to the gathering, lauding the collaborative attitude among Worcester’s higher education, government and business communities.

“One of the things I’ve talked a lot about during the campaign is that we think of our educational institutions as educational institutions, and that’s great. But many of them have tremendous power and capability, and we think a little differently about them,” he said citing in particular the Mass. College of Pharmacy and Health Sciences, UMass Medical School and WPI, and the research being done on medical and biotech.

“I just think the sky is the limit, in many respects. I can’t tell you how much I’m looking forward to seeing this region continue to grow, continue to expand and to continue to build on this wonderful brand you’ve established, a bona fide and legitimate player in what I call the economic opportunity of education.”

Baker also pointed out that his son, A.J. attends Union College, a WPI football opponent. “I must say, a bunch of kids pledging a fraternity, lined up with letters painted on their stomachs spelling out Worcester Polytechnic Institute is quite a sight. I’ll never get it out of my mind,” he said, drawing laughter. “A couple of kids were wearing T-shirts that said, “Friends don’t let friends go to MIT.’”

He shared another light moment when Leshin presented him and Polito with red fleece WPI pullovers bearing the 150th logo. “I’m probably not going to wear this to Union.”

– BY JENNIFER WYGLINSKI AND MARTIN LUTTRELL