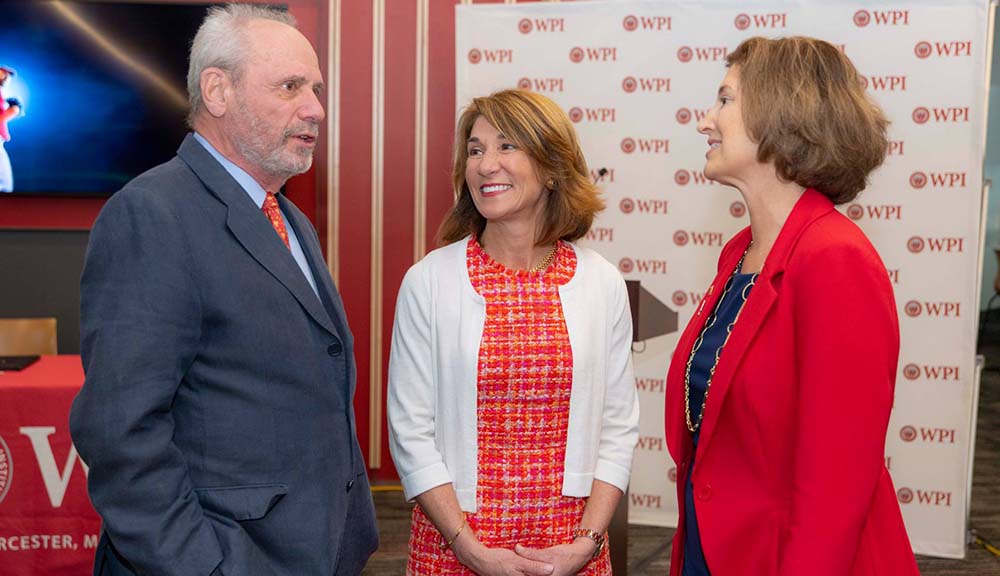 Heavy hitters for sure. But they’re just a few of the luminaries from government, industry, and education who visit the WPI campus throughout the year. Central to these events is WPI’s office of Government & Community Relations, which fosters relationships among the university, community leaders, and state and federal officials.

With constant planning and extending the university’s scope of partnerships, the office plays an important role representing WPI and its research, academics, and legacy of achievement.

“We have conversations in Washington so policymakers understand the importance of this research, not only to this university, but to the commonwealth and beyond,” said Linda Looft, assistant vice president of Government & Community Relations.

When it comes to government, WPI provides detailed logistics for interactions as well—ranging from staff members traveling to Washington, D.C., or Beacon Hill; hosting announcements or informational events on campus; arranging for appropriate attendees and speakers; and providing frameworks for legislators’ remarks on campus.

Beaton back on campus

Matt Beaton ’01 returned to WPI on March 27 to deliver the keynote address to the Center for Global Public Safety’s Second Annual Industry Stakeholders’ Forum. The theme was energy initiatives and their impact on public safety. He is familiar with WPI’s merits, having graduated from the university with a biotechnology degree. A former environmental engineer and energy-efficiency consultant, he has also served as a state representative. He has a history of efforts to stabilize electric rates, cut greenhouse gas emissions, and advance clean-energy technologies.

On April 24, Baker announced a new grant program as part of his administration’s Digital Health Initiative that will provide $500,000 in funding to open doors for healthcare technology start-ups to access research and development “sandboxes.” The governor made the announcement during a visit with Digital Health Council members at WPI’s PracticePoint, one of the facilities supported by the program, where healthcare start-ups will be able to test existing technologies and develop new products and services. 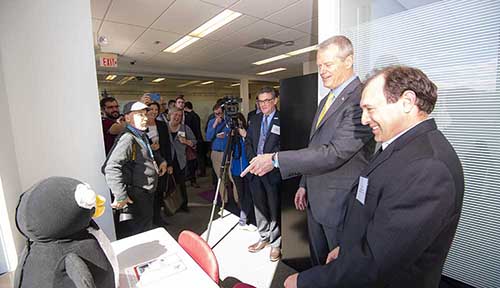 “I think PracticePoint is going to be the source of a lot of creative ideas,” Baker said. “This is a great place for us to be. And so much of what is going to happen will be engineering and data science. Those are two areas where WPI is a national leader. We’re very excited about it because it builds on the partnerships we’ve already established with this school, its students, and its faculty.”

PracticePoint was created in 2017 with a $5 million capital grant from the Massachusetts Technology Collaborative (MassTech) to help build the new facility. Securing that funding was a cross-campus, months-long effort led by President Leshin, provost ad interim Wole Soboyejo, vice president of academic and corporate engagement Stephen Flavin, and vice provost for research Bogdan Vernescu, among others. The lab is slated to open in late summer with an official ribbon cutting.

Again, the Government & Community Relations office was heavily involved. “We need to help coordinate, and make certain the appropriate WPI leadership and community leadership are present to tell the story about this success,” Looft said. “Our legislators want to see the commonwealth succeed through job creation and spinouts. WPI is very well positioned to serve as a catalyst for that.”

The following day, April 25, Red Sox owner and chairman Larry Lucchino joined President Leshin, Congressman James McGovern and a slate of city and state officials in announcing a partnership in which WPI will become the official Worcester Red Sox academic technology advisor, helping the club design and develop what will be known as Polar Park, home to the Red Sox Triple-A farm club. The park is expected to open in 2021.

McGovern said much of the economic development taking place in the city stems from WPI, citing Gateway Park, developed on a former brownfield, as one example. “I’m happy to see a partnership between one of the premier technological universities in the nation and the Worcester Red Sox, which is sparking even greater economic growth in the city. … So much of what you’re seeing in Worcester is the result of partnerships with WPI and other colleges.”

“Bringing tech into a baseball park is really profound,” said Lt. Gov. Karyn Polito. “The idea to use smart technology to improve sales, concessions, ticket sales, and getting fans to their parking space and seat so they don’t miss the first pitch is amazing stuff.”

Getting acquainted with Mass Academy 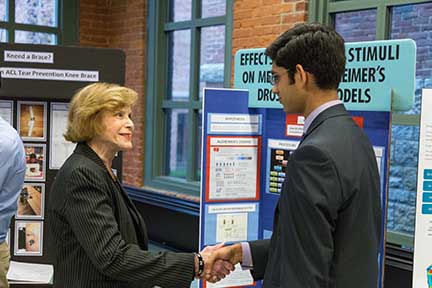 Closing out that week, state commissioner of education Jeffrey Riley visited the Massachusetts Academy of Math and Science at WPI, where he reviewed students’ science fair and assistive technology projects, and chatted with students and faculty. Riley was joined by state senators Harriette Chandler and Michael Moore.

"What we saw today were kids working on real-world problems. They’re making patents, they’re doing science fairs," Riley said at the conclusion of his visit.  "This is what education is supposed to do, and what we need more of in Massachusetts.”

Looft credited Mass Academy with providing an extraordinary learning environment. “The visit will help Commissioner Riley better understand the unique programs at the Mass Academy and the remarkable outcomes for the state’s investment. He heard about the successes, its history, and the kind of outcomes being produced. It’s different than any other public school.”

-By Susan Shalhoub and Martin Luttrell