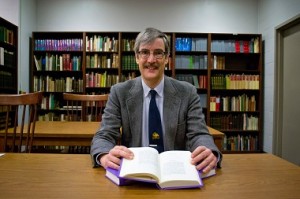 WPI English Professor Joel Brattin is a Dickensian scholar of the highest rank—so amply regarded that when the Bradford Exchange Press sought to recreate a high-quality replica of Great Expectations, the company called upon Brattin to be its editorial consultant.

The project is part of Bradford’s Million Dollar First Edition Library, published by Charles Winthrope and Sons. The company has also reproduced such classics as Adventures of Huckleberry Finn by Mark Twain,Moby Dick by Herman Melville, and Alice’s Adventures in Wonderland by Lewis Carroll.

We needed to reproduce an exact replica, mistakes and all.
Joel Brattin

Recreating Great Expectations proved to be a daunting task, one worthy of its namesake. Like other Million Dollar Editions, it was to be an exact replica of the originally published book. In this case, the extremely rare first edition of the popular Charles Dickens novel, which was published in three volumes in 1861.

Standing in the room of the Robert D. Fellman Collection at the Gordon Library, Brattin pointed out some of the challenges that he faced. Opening one of the three volumes, he points out a typo on a certain page and says, “See how the ink has smudged here? Well, normally you would certainly want to correct that. But, we needed to reproduce an exact replica, mistakes and all.”

Of course, this runs counterintuitive to editors and copy editors alike – sort of like asking them to overlook misspellings or grammatical errors on purpose, but this is exactly what was needed to make the project a success.

Brattin says there was a modicum of resistance and admits that Great Expectationshas its share of typographical errors, however, once the concept was understood, the project and partnership went smoothly. Still, Brattin had to scrutinize every single word.

By the way, Robert D. Fellman was a close personal friend of Brattin, and the collection is one of all things Dickens, including many hundreds of books, articles, and other ephemera related to the author.

Brattin, professor of English Literature in the Humanities and Arts, has written extensively on Dickens. Among his many professional highlights, he singles out this: “I was invited to deliver the graveside oration in Westminster Abbey in 2010, commemorating the 140th anniversary of the death of Charles Dickens.” He was also honored to serve as president of the Dickens Society in 2000, and was awarded the WPI Trustees Award for Outstanding Research and Creative Scholarship in 2008. 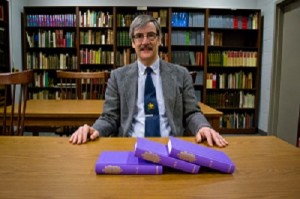 This past summer, Brattin was invited to lecture about the Great Expectations project at the 19th Annual Dickens Society Symposium in Domaine de Sagnes, Béziers, France. His talk was aptly titled “Producing a Replica First Edition: The 1861 Three-Volume Great Expectations.” In his opening statement, Brattin said: “In my presentation today, I will talk about why the first edition in book form is of interest to scholars, why it is so desirable by collectors, and why it is so rare. I will describe some of the technical design issues involved in producing the replicas, including discussion of the cloth, the design, the dimensions of the book, the density of the ink, the resolution of the scans, and the color of the endpapers. I will consider some of the interesting textual issues involved in producing a high-quality replica of the first book edition, and discuss the process of ensuring accuracy. Finally, I will explore some considerations of marketing and publicity.”

Sitting at a table at the Gordon Library with the newly minted volumes before him, Brattin reiterated many of the points he spoke of at the symposium. Ultimately, he says that the replica first edition does not attempt to reproduce some kind of ideal first edition by correcting the unique typographical errors and eccentricities of the original. Nor does it attempt to create a heavily used vintage copy of Great Expectations. “Rather, the Bradford Press attempts to provide a high quality copy of the book just as it would have looked and felt as it appeared fresh from the London publisher, Chapman and Hall, in July 1861.”

The volumes are now part of the permanent collection in the Robert D. Fellman room in the Gordon Library.