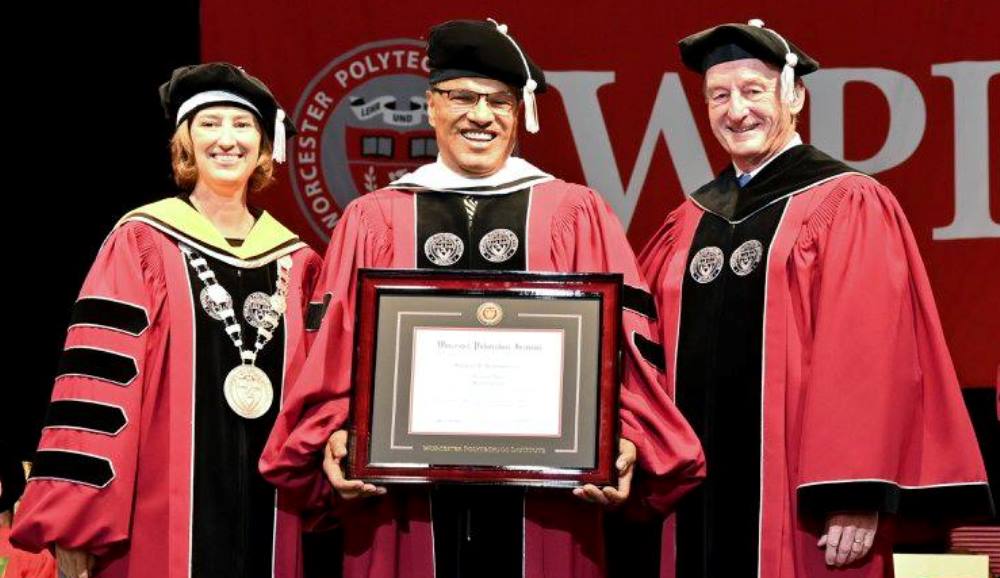 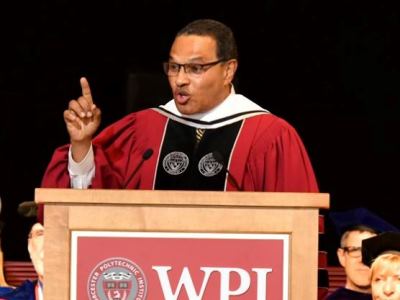 "Remember that you’re sitting with your families who support you, and who got you here," Freeman Hrabowski told graduates.

Worcester Polytechnic Institute (WPI) President Laurie A. Leshin and Board of Trustees Chairman Jack T. Mollen presided over the university’s 151st Commencement celebrations this evening, awarding over 850 master’s and doctoral degrees at the Graduate Ceremony, held on the campus Quadrangle.

WPI awarded honorary degrees to Kevin O’Sullivan, who recently retired as president and CEO of Massachusetts Biomedical Initiatives, and keynote speaker Freeman A. Hrabowski III, president of the University of Maryland, Baltimore County.

In his remarks, Hrabowski expressed his excitement at being asked by his longtime friend, Laurie Leshin, to speak at WPI’s graduate commencement. “I’ve been watching the progress of WPI for a long time,” he said. “You’re a national leader in project-based learning, and you’re the alma mater of Robert Goddard. In my area, that’s a big deal.” 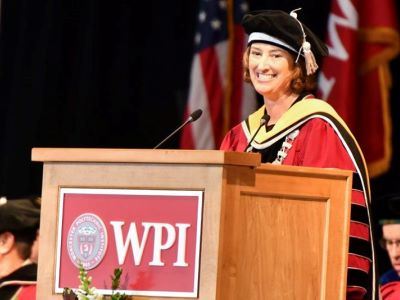 In her remarks, President Leshin urged graduates "do good for your community, nation, planet, and for all of those following in your footsteps."

Hrabowski touched upon his childhood and the encouragement he received from his grandmother to keep alive his hunger for success, which he shared with the Class of 2019: “My grandmother said to me, ‘Son, you have to do well because you work really hard, you have the tenacity,’” he said. “‘And make sure you always stay on your knees, especially as you go up the ladder. If you remain humble, when you get knocked down, you won’t fall too far.’”

Hrabowski also told graduates to take care of their health and wellness, and to thank their faculty and advisors for helping them on their journey. From each of these things, he said, graduates now have a responsibility to help others to see what they see, and to communicate how science is important.

“How do we get this country to understand this importance of STEM?” he said. “For example, do you know the number one reason we’re living as long as we are today? Clean water and sewage systems. You need to tell people that they wouldn’t be alive without the engineer. Engineering helps us in so many ways.”

Hrabowski closed his remarks by sharing another anecdote from his childhood, reminding graduates to thank their families for helping them get to the stage. 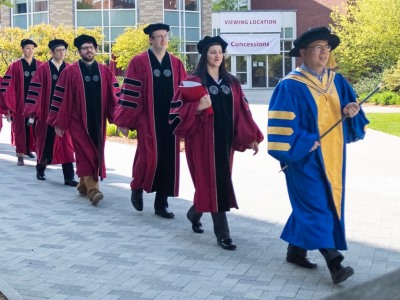 When he was younger, he said, his grandmother would make two blueberry pies—one for the family, and one just for him. “My mom would get mad about it, but my grandmother would sit with me while I ate that pie and did math. I remember the pie because of her unconditional love.

“Remember that you’re sitting with your families who support you, and who got you here. This is your blueberry pie moment.”

In her remarks, President Leshin congratulated the Class of 2019 for “enduring stress, overcoming setbacks, and pushing boundaries.” As students leave campus with a degree, Leshin said she anticipates they will continue to “break barriers and open new doors.” 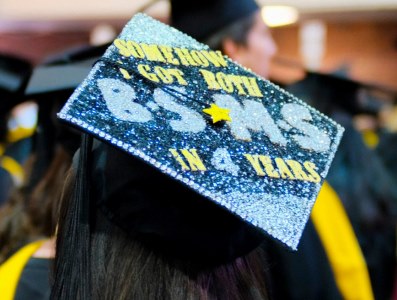 One of many creatively decorated caps, this one from an especially accomplished graduate.

As an example, she highlighted the work and success of Joshua Gershlak, who graduated with a doctorate degree in biomedical engineering, and his work utilizing the scaffolding of spinach leaves to grow and nurture cardiovascular cells, an innovative approach to studying vascular disease. “His work has been featured in literally thousands of media stories worldwide,” Leshin said. “That’s the amazing thing about education. The deeper learning you’ve pursued in your grad education helps you see the world differently, address challenges, and develop tools to face them. You’re ready for whatever comes next.”

And as she does each year, Leshin told the graduates, “My charge for you, Class of 2019, is to do good for your community, nation, planet, and for all of those following in your footsteps. We’re counting on your to use your smarts and talents for good.”

Following Leshin, graduate student speaker Doreen Manning gave her remarks. Manning, who received her master’s in business administration, told her fellow graduates that she took an indirect route as “…earning a master’s degree had simply not been on my career radar.”

Manning, a mother of four and editor of the WPI Journal, the university’s quarterly magazine, had plenty on her plate, including roller derby—a sport she played for seven years—but a traumatic leg fracture sidelined her and left her feeling adrift. 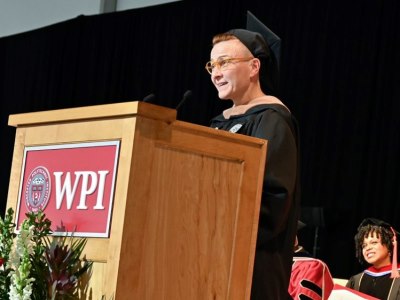 Student speaker Doreen Manning, who reports on WPI graduates as editor of the WPI Journal, told of her joy of being able to say "I'm an alum, too."

Ultimately, Manning reflected on what she had heard from countless alumni she had interviewed for the WPI Journal— that WPI gave them deep learning experiences, teambuilding abilities, and honed critical thinking skills. “I yearned to be a part of that team,” she said.

For the next three years, Manning said, she learned about organizational structures and behaviors and other facets of the business world. It was at this moment, she said, that she “had a lightbulb moment when I learned that failure is part of learning.”

“So as I leave the podium today, I will do so not only with a diploma, but with new insights into myself and my role within the world,” Manning said. “Yet even more importantly, when I meet with alumni in my position as editor of the WPI Journal, I get to tell them, with pride, ‘I’m an alum, too!’ ” 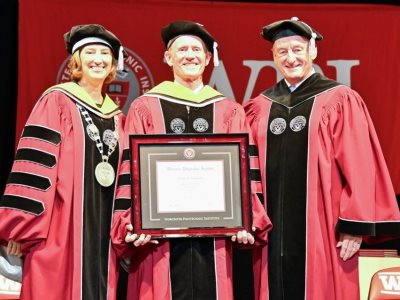 Since 2016, WPI has held two distinct exercises in the spring to celebrate the accomplishments of its undergraduate and graduate students, owing in part to the growth of its programs, particularly its graduate programs. This year WPI awarded a total of 792 master’s degrees and 60 PhDs. Nearly 1,020 students will receive bachelor’s degrees when the undergraduate commencement exercises are held on Saturday, May 11, at 10 a.m.

In addition, WPI hosted a commencement ceremony on Wednesday, May 8, for graduating softball and track and field athletes who will be off campus representing WPI in championship events on Saturday.