The End of an Era

After six decades and more than a million meals, Chef John Hayes is hanging up his apron in the Goat’s Head kitchen.

An employee of Chartwells, the university’s food services vendor, John is believed to be the longest-serving employee in campus history. He began cooking for the university community in 1956—when coffee was 85 cents per pound, microwave ovens weren’t widely available, and Dwight D. Eisenhower was in the White House. 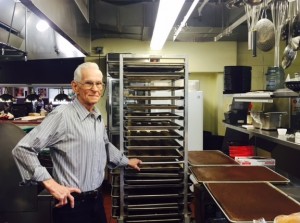 John, who grew up in Shrewsbury as one of 12 children of Irish immigrants, is a second-generation WPI employee: His father, Patrick Hayes, worked briefly in Founders Hall after emigrating from County Cork, Ireland, before joining the Shrewsbury Highway Department. John remembers his mother always preparing food—baking, raising chickens, and canning fruits and vegetables to store over the winter. “Saturdays, we’d kill and pluck the chickens,” he recalls. “Sundays, all the relatives would come, and they’d go home with roasted chicken, breads, jellies—all kinds of foods she’d make for them.”

John’s own cooking career began when he was 10 or 11 years old and took a job in the now-closed Fairlawn Diner in Shrewsbury to make some pocket money. “I think the pay was about 50 cents a week,” he said. He later joined the Army and served as a cook during the Korean War; he was stationed near Seoul and also spent time cooking on military bases in Iceland and in the US.

In honor of John’s service to WPI, Chartwells will hold a reception today from 1:30 to 3:30 p.m. at the Goats Head. Please stop in and congratulate John on his incredible career at WPI and wish him well as he moves into retirement. Light refreshments will be served.

With more than six years of experience in cooking for large numbers of troops, John joined WPI as part of the Riley Hall kitchen staff and noted that, at the time, both the Army and university had a similar philosophy about dining: “Take it or leave it.” There was some variety and the food was hearty and healthy, but there was certainly not the wide range of specialty foods to suit every preference.  Over the years, as the campus grew—from about 200 students per incoming class in  the 1950s to about 1,000 per year now—so did the culinary offerings. Today’s students can expect a tremendous variety from which to choose, including international cuisines and options compatible with dietary restrictions, food sensitivities, and allergies.  Enduring favorites are chicken tenders and fries, and of course, pizza.

Then as now, John says, staff enjoyed feeding the kids and looking after them. John could be strict when it came to wasting food, though—a holdover from growing up in a large family. If he saw a student headed to the trash can to throw away any food, he’d would send the student back to the table to finish the meal.

“John has prepared food for more than three generations,” says Joe Kraskouskas, director of Dining Services, who has worked with John for 21 years. “He’s inspiring and has been an integral part of every major function we’ve had for the past 20 years, and we’re already missing him in the kitchen.”

John has worked in the student dining hall in Sanford Riley (now in Morgan Hall), Founders Hall, and lastly the Goat’s Head Founders Hall, where he had taken over most of the baking duties, turning a 50-pound bag of flour into dough for 75 pizzas, or baking enormous sheets of brownies or 40 dozen cookies at a time.

Asked what he’d tell a new kitchen recruit, John says, “Just stick to it. If today’s a bad day, you start over tomorrow. The days go by quickly when you’re busy.”

START AT THE BOTTOM

John also thinks that new employees should start at the bottom and earn their way up—a philosophy he himself followed and taught his own children. His son, also named John Hayes, began working as a teenager in catering and food services—at WPI, of course—and was later a student manager in dining services while studying at Worcester State. He now manages food services at Salem State University, having worked his way up over 30 years.

According to John Jr., “My dad also taught my three sisters to cook so they’d know how once they left home,” but the elder John still oversaw Sunday dinners and holiday cooking. “He had a separate kitchen down in the basement where he could do his own thing.” In addition to cooking, John enjoys carpentry and gardening. He has renovated his house “from one side to the other,” and built rock walls in his garden.

Though he is looking forward to retirement, when asked what he’ll miss most about WPI, John quickly says, with a gentle smile, “All of it.”