According to Rob Krueger, associate professor in the Department of Social Science and Policy Studies, the idea of urban sustainability is on target for achieving many goals, but the reality of its implementation isn’t so ideal.

Krueger, whose latest book, Adventures in Sustainable Urbanism, says the consequences of implementing sustainable approaches into densely populated urban areas has created significant, and unexpected, environmental and social impacts. “About 80 percent of the global population is moving toward cities, and to achieve global sustainability, cities are important targets,” says Krueger.

More Than One Approach to Sustainable Urbanism

In Krueger’s early days of research, he was a proponent of urban sustainability, but as the practice has progressed and taken hold, his views have shifted. He is a critic of sustainable urbanism that is more disruptive than progressive. From this dissatisfaction came the inspiration for his latest book.

“I was a keynote speaker at a conference in Germany in 2012 and, after my talk, I was sitting listening to the other speakers; I was taken by the research findings of scholars from all over Europe,” he says. “Their data showed how current sustainability policy and practice around Europe was evolving in ways similar to what I had seen in North America and the UK, and thought we should document this.” Turns out it happens this way around the world.

In addition to conceptualizing and documenting urban sustainability, Krueger wanted to help students understand the ripple effects of what was happening and begin to think critically about the future. “I wanted students to understand the historical roots of urban sustainability and the context that it has become operationalized in. I want to inspire students to think of alternatives given the problems with it,” he says. “I want them to think of how they might do it better.” 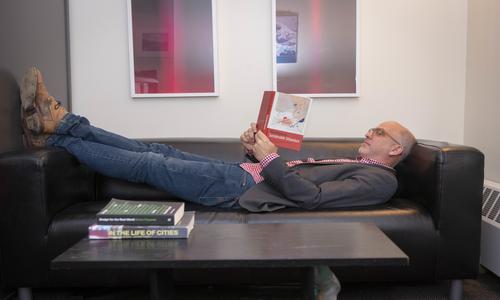 The book, says Krueger, offers a global view of what sustainable urbanism looks like in different cultures—whether that includes urban design, sustainable development, or land use—and how social justice is an important, yet often neglected, part of the conversation. “When developers invoke the notion of sustainability in their rhetoric, people stop asking important questions,” he says. “Sustainability has become a shiny object. We can’t get distracted by shiny objects.”

The book includes chapters that contain what Krueger refers to as “field trips” showing what urban sustainability policy and sustainable development practice looks like in different cities that are seeking to add to the broader picture of global sustainability. “These aren’t case studies with a particular agenda or ax to grind—they are first-person narratives that provide a visual image of sustainable initiatives around the world,” he says. “They are written in a way that invites students to untangle them in their own way to come up with something better.”

Krueger feels unsettled with the way sustainability has changed over the years—moving from idea to actual implementation. “When I started at WPI,” he says, “governments were starting to reinvest in cities. They were cleaning up brownfields, and renovated warehouses all of a sudden had a certain caché and were fashionable. People were interested in how cities could become vibrant and inclusive places. In the course of policy development, planning, and implementation, some co-opted the discourse of sustainable development and made it less than something it should be.”

Even with all kinds of positive changes that urban sustainability has the potential to bring—increased mixed-use spaces, green transportation—the act of change shifts the bigger picture of sustainable urban development, he says. As the spaces become more attractive, the market value and housing prices increase; increased interest in living in a regenerated area makes available housing tight and changes everything from parking patterns to stores; and even the basic geography may change as green spaces are encroached upon or natural waterways are diverted.

Like dominoes, families, even those who have lived in a neighborhood for generations, find themselves being priced out of local property markets, says Krueger. Disruptions to social circles, community networks, even community-centered employment changes the entire neighborhood, leaving a story of urban sustainability that Krueger classifies as unsuccessful.

Editor’s Note: This story has been updated with a post-script at the end of the article. It was originally published on Nov. 7, 2019.

“I talk about the impacts of so-called ‘sustainability’ on these folks,” says Krueger. “There are no quick technical fixes. All of these are intrinsically social problems. You can design the perfect green building and you can design the perfect neighborhood from a technical point of view, but when you put that ‘model’ into society there are massive unintended consequences that we need to train our students to look out for in the design process.”

Krueger hopes the book raises critical questions about urban design, global sustainability, and how they translate into actual and successful sustainable development. The topics and discussions will add to the research on how urban sustainability changes how people live in cities. “It starts out as sustainability—green,” he says, “but where is the social justice?”

“In Ghana we are working with local stakeholders, government, and traditional leadership, and end users on developing solutions to human health and environmental pollution problems from small-scale gold mining,” he says. “We are not going in with predetermined solutions or judgements, we are working with local people to identify problems and development ways forward that are culturally appropriate, provide economic security, and promote self-determination of a community rather than continued dependence and aid.”

For Krueger it always comes down to social justice.

Professor Krueger has extended the work in his book to include non-western responses to sustainable urbanism in Africa. Currently, he is soliciting contributions from African scholars and visionaries for a special issue of the journal Frontiers in Sustainable Development to share their ideas, with the goal of revealing processes of African Sustainable Urbanism that do not fit the traditional Western narrative.

Krueger is also guiding WPI’s Institute of Science and Technology for Development (InSTeD) in collaborating with researchers and community partners in Worcester and around the world to co-design culturally appropriate solutions to social-technical problems.  With partners from several African countries, Krueger is facilitating partnerships between communities, researchers, educators, NGOs, and donors.