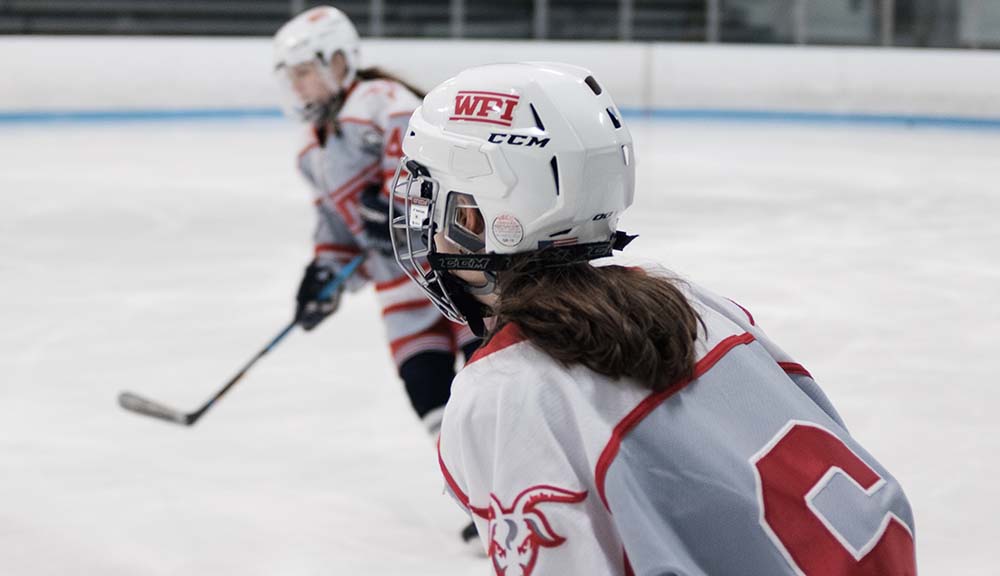 For some students, ten o’clock is bedtime (or time to down the second cup of coffee needed to finish that paper), but for the group of women who make up the WPI women’s ice hockey team, ten o’clock is ice time, and they spend all week waiting for the puck to drop.

Team co-captains Elleana Paradise ’21 and Emily Gordon ’21 (center and left wing, respectively) had played hockey for years in high school, and wanted to keep their passion going in college. They were both members of the men’s club ice hockey team for a while, but began to realize that a women’s team would be a better fit.

“It’s an entirely different game,” Paradise says, but, unfortunately, there was no women’s ice hockey team on campus for them to join.

So they took matters into their own hands—in this case, gloves—and created a club team of their own.

“Hockey’s just a part of who we are. It would’ve been really hard to have to give up the game after all this time,” Gordon says, adding that founding the women’s team has been an invaluable leadership experience and has given them the chance to meet fellow players they might not have run into otherwise.

“That’s been my favorite part, watching their development and cohesion as a group,” says team coach Jack Sweeney. “When we first started, I’d go into the locker room and the level of silence was deafening. Then it occurred to me—though these women go to school together, they don't know each other. It would take a bit of time for them to connect, and now I see what you’d see in any team—friendships, camaraderie, and a lot of fun.”

That camaraderie is already branching out to future players. There’s growing interest in the team from first-year students, and Paradise, Gordon, and the rest of the team have been in contact with them, answering questions and getting them excited about the future.

“We’ve had a couple girls ask us to hang out and talk with them when they visit campus,” Paradise says. “It’s really nice to hear.”

“We grew up with hockey. We’re just glad to be able to keep it going.” -Emily Gordon

Ask Gordon and Paradise about what it took to start a team from the ground up, and you’ll get humble responses—but associate athletic director Ann McCarron is there to give them the credit they deserve.

“I’m so proud of these young women,” she says. “A year ago they had a vision of starting a women’s ice hockey club—and they persevered and made it happen. It’s a lot of work to be a student leader in club sports, and they did a phenomenal job.”

Sweeney agrees, adding that the women have taken on something very profound. He and McCarron both believe the team will live on for years to come, and that the co-captains will be leaving a legacy behind them—although Gordon and Paradise had much simpler goals in mind when they founded the team.

“We grew up with hockey,” Gordon says simply. “We’re just glad to be able to keep it going.”

With an environment that empowers students to pursue their passions, there's a club or organization for everyone at WPI—from the Society of Magicians and pep band to underwater hockey and the cheese club. Get to know some of them.