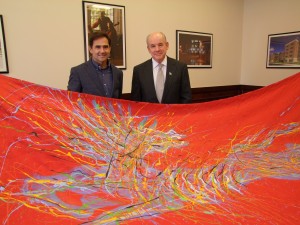 In 2002, Eduardo Navarro ’81 was speaking with a client in Panama when she had a bit of unusual request.

“My client was opening a restaurant and she wanted to commission me to draw a horse,” recalls Navarro, a longtime artist. “But I told her I don’t paint horses. ‘Why do you want horses,’ I asked her, and she said, ‘Well, I’m opening a restaurant—it’s the Chinese Year of the Horse and I’m Chinese.’ So I painted my first horse and a I haven’t stopped painting horses since.”

That’s the truth. Since that day in Panama 11 years ago, Navarro has gone on to paint at least 1,000 horses. On Wednesday morning, Navarro returned to the WPI campus for the first time in 32 years as part of a series of meetings to discuss his artistic involvement in WPI’s solar house project. Prior to the meetings, he visited with President Berkey and presented him with a painting of a wild horse—titled “Caballo” (Spanish for horse)—on a 12-foot canvas. The striking acrylic depicting a horse in a splash of colors will hang in a WPI building in the coming weeks.

When asked if this particular horse is unique, Navarro become quite animated. “Of course, they’re all unique and come from all different backgrounds,” he says.

Navarro, 52, says it took him three months to complete the work. In addition to his painting prowess, he is involved in an artistic endeavor for the Solatrium, a 1,500-square-foot, net-zero energy house built by WPI that will be on display at this year’s Solar Decathlon competition in China in August.

Navarro explains that Tahar El-Korchi, head of the Civil and Environmental Engineering Department at WPI, has been coming to Panama City for several years as the advisor on WPI student projects. During one of those trips, El-Korchi asked Navarro if he’d consider making a sculpture for the house. Sculpting was unfamiliar territory for Navarro, but he was up for the challenge. “After a while, I said, ‘You know what, Tahar, I’m going to take a week off and go learn and see what I can do.’ ”

The Panamanian also has an aptitude for engineering as he received his bachelor’s degree in mechanical engineering. Today he’s the publisher of Panorama of the Americas, the in-flight magazine for Copa Airlines, which serves Latin American countries.

The WPI community can see more of Navarro’s artwork at www.eduardonavarro.com.