Gompei would be proud. What started as an idea to help goat farmers protect their herds from a devastating virus has evolved into a platform technology that may help detect many pathogens that affect both humans and animals. 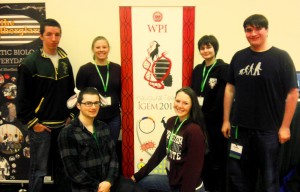 Such was the experience of WPI’s first iGEM (International Genetically Engineered Machine) team, who launched their work in June and competed in Boston last month at the Giant Jamboree 2014 where some 2,300 students from 245 teams around the world gathered for the largest iGEM competition so far.

“It was an amazing experience,” says team member Shawna Henry ’15, a biology and biotechnology major. “From all the work we did in the lab, to the techniques we learned and the problems we solved, we did so much more than I ever expected to do as an undergraduate.”

“The students were fantastic. They really meshed well as a team and we were thrilled to earn a Gold Medal in our first year,” says Natalie Farny, assistant teaching professor of biology and biotechnology and lead advisor for the team. “We are already planning for next year.”

iGEM competition is a global synthetic biology program that challenges college students to create biological machines that work within living cells to produce a desired product or process. Projects cover a wide range of applications in food, nutrition, health, and medicine to environmental, energy, manufacturing, and information processing technologies.

Teams start with a standard tool kit of more than 1,000 biological parts that iGEM calls BioBricks; these are mostly sequences of DNA known to do specific things in cells. Teams begin with the same kit, but are encouraged to innovate and design new biological parts as their projects progress.

The WPI team worked all summer and into A-Term. Their initial idea was to create a rapid blood test for caprine arthritis encephalitis virus (CAEV), which can spread undetected through a herd of goats, reducing the milk production and lifespan of one of the most important farm animals in the developing world. Creating a simple, inexpensive way for farmers to test their goats (or sheep, which are also susceptible) would help farmers realize the problem sooner and isolate infected animals.

The initial plan was to engineer E.coli cells so they would present CAEV particles on the cells’ surface. The cells would then be mixed with a small amount of goat blood, and if the animal was infected with CAEV, antibodies in the bloodstream would bind to the virus particles and cause the E.coli cells to clump together and create visual result easily read by the naked eye. The technology, called an agglutination assay, is currently used in several clinical ways, including determining a person’s blood type. The WPI team’s innovation was to adapt that agglutination platform for detecting the virus. The team soon realized, however, that if their idea worked, then the E.coli system could be used to test for many different viruses and bacteria that cause both animal and human disease. “We started with a single focus, but then realized we could think more broadly,” Henry says.

By the time of their presentation at the Jamboree in Boston, the team had succeeded with a proof-of-concept assay that displayed specific proteins on the surface of the E.coli cells. More work is needed to refine the platform for presenting viral or bacterial pathogens, though WPI has already filed a patent application for the technology. “This could evolve into an important new technology,” Farny says. “Work will continue on the idea in our lab and perhaps through an MQP project.”

At the Jamboree, WPI was one of 99 teams to earn a Gold Medal, which meant going above and beyond the basics of the competition in several ways. For example, the WPI team reached out to high school and middle school students in Central Massachusetts to discuss the iGEM program and build interest in biology and other STEM fields. The team also designed and distributed a survey tool to Massachusetts goat farmers to gather real-world information to guide their project. (Details of the survey and student outreach are posted at http://2014.igem.org/Team:WPI-Worcester/Outreach).

Collaboration is an essential element of the iGEM program and teams are encouraged to work together, even as they compete. The WPI team collaborated with iGEM teams at Boston University and MIT, with each group offering specific expertise to advance the others’ research project. Those collaborations also helped WPI earn a Gold Medal. (Details of the collaborations are posted at http://2014.igem.org/Team:WPI-Worcester/Collaborations).

“I am very proud of what the team accomplished in their first year of this intense competition,” says associate professor and department head of biology and biotechnology Joseph “Duff” Duffy, principal sponsor and co-advisor of the team. “I think next year we can grow this program, because the students were so engaged in the field, seeing biology as a powerful science that can be applied broadly to solve so many problems facing the world today. We’re already seeing many other students asking if they can be involved next year.”

For all the details of the WPI Team and their project, see http://2014.igem.org/Team:WPI-Worcester.