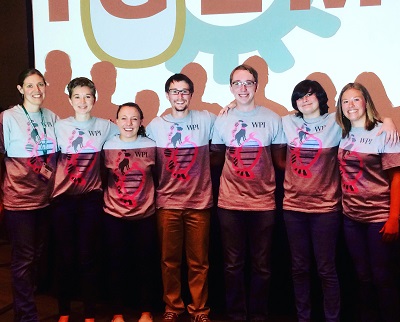 The proteins that keep fish from freezing to death in the frigid waters of Antarctica could be adapted to prevent serious infections in hospitalized patients, based on the work of WPI’s iGEM 2015 Team that recently earned a Gold Medal at the iGEM international competition in Boston.

“This is an awesome program,” says team member Kayla DeSanty ’16, a biology and biotechnology/biochemistry major. “From our research project itself, to collaborating with people from around the country, to having to present our findings to scientists from around the world, it was an experience that will stick with me for a lifetime.”

What they have discovered could become a powerful regulatory process, so WPI has filed a preliminary patent application on the technology.
Prof. Natalie Farny, lead advisor

iGEM is the International Genetically Engineered Machine competition—a global synthetic biology program that challenges students to create biological tools that work within living cells to produce a desired product or process. WPI’s team organized in D-Term last spring, worked all through the summer and into A-Term this fall. In September they participated in the iGEM Giant Jamboree in Boston, where some 2,700 students on 259 teams from around the world gathered to present their projects and compete for honors.

In addition to DeSanty, the WPI team included Edward Dring’17, Chloe LaJeunesse ’17, David Morgan ’17, Julie Mazza ’16, and Charlotte Reames ’17. “Our team did an outstanding job,” says Natalie Farny, assistant teaching professor of biology and biotechnology, lead advisor for the team. “This is important science, not just a competition. It’s an authentic research experience and the results are pretty amazing.”

iGEM projects cover a wide range of applications in food, nutrition, health, and medicine to environmental, energy, manufacturing, and information processing technologies. Each team starts with a standard tool kit of more than 1,000 biological parts that iGEM calls BioBricks; these are mostly sequences of DNA known to do specific things in cells. Teams begin with the same kit, but are encouraged to innovate and design new biological parts as their projects progress. 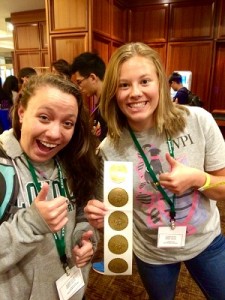 The WPI team’s early brainstorming focused on the challenges of terraforming on Mars. They thought about using biological processes to help mitigate the extreme temperature swings and solar radiation on the Martian surface. Ideas flowed freely and eventually the group became intrigued with the properties of antifreeze proteins. First discovered in Antarctic fish, and subsequently in some plants and insects, antifreeze proteins are produced by the organisms to prevent water molecules from forming ice crystals in their bodies.

The team initially thought about building a library with detailed information about the structure and function of the known classes of antifreeze proteins. Early on in that work they discovered a reference in the scientific literature about an antifreeze protein that prevented the bacteria Staphylococcus aureus from forming a biofilm—the first step that leads to a staph infection. That was the aha moment for the team. They focused the rest of their work on characterizing 20 different antifreeze proteins isolated from 16 organisms, including fish, insects, and plants, to test their ability to prevent the bacteria E.coli from forming biofilms on lab plates.

Blocking biofilm production is important for human health. Coating surfaces of catheters and other invasive medical devices with antifreeze proteins, for example, could help prevent serious infections in hospitalized patients. Similar applications could be used to prevent bacterial contamination in food processing facilities. Conversely, the ability to enhance biofilm production in certain cases could be valuable, Farny notes. Encouraging the growth of engineered biofilms on filter surfaces, for example, could be useful in water purification systems and other technologies.

“What they have discovered could become a powerful regulatory process, so WPI has filed a preliminary patent application on the technology,” Farny says.

Research on the antifreeze proteins will continue at WPI, she says, perhaps as an MQP project, or through another program. The iGEM team is also now preparing a paper detailing their project’s results to submit to a peer-reviewed journal.

“This is what more of undergraduate science education should be,” says Joseph “Duff” Duffy,  associate professor and head of biology and biotechnology, principal sponsor and co-advisor of the team. “We want our students to understand that good science often means taking risks and exploring ideas if you want to solve big problems.”

At the Jamboree, WPI was one of 115 teams to earn a Gold Medal, which meant going above and beyond the basics of the competition in several ways. For more information about the WPI team and their iGEM 2015 project, see http://2015.igem.org/Team:WPI-Worcester.