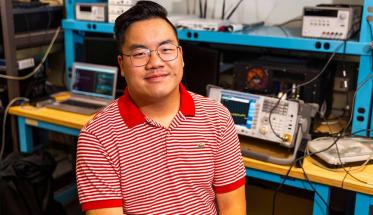 Improving Communications with the ISS Using System Developed at WPI

Graduate student Max Li knows that working at NASA this past summer on a system that gets satellite communications to automatically adapt to environmental changes will help his job prospects after receiving his master's degree in electrical and computer engineering in December. 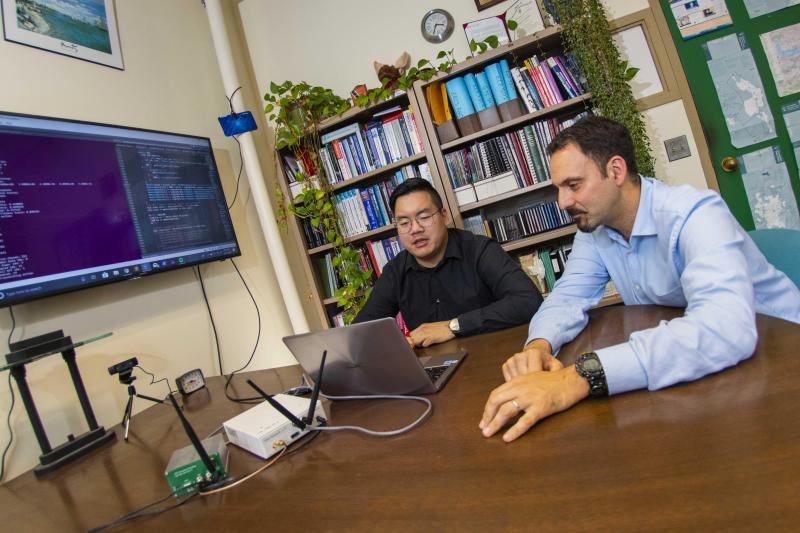 "Obviously, the name NASA definitely helps out," he says.

Li spent three weeks at NASA's John Glenn Research Center in Cleveland working on an algorithm driving the machine learning system. The system was developed several years ago at WPI and implemented at the Cleveland site by a graduate fellow from Pennsylvania State University.

The system includes an Earth base that sends information to the International Space Station, which is then transmitted back to earth.

"The project is about using machine learning to intelligently change radio parameters so that you can have a communications system that adapts to different environmental situations," Li explains. "We're mostly thinking about [communications] between satellites and the ground. The space station is sort of a simulation of a satellite. We're using the space station as our test platform.

"The idea is, if there's a change in the environment that we weren't expecting, the system would be able to adjust and to learn what it should do. That's where the machine learning comes in."

Li says the theory behind the system was developed at WPI by Paulo Ferreira, who earned his PhD in electrical engineering in 2017. The system was implemented at NASA by Timothy Hackett, a Penn State graduate fellow in electrical and electronics engineering, who worked with Li this summer.

Li joined the project about a year ago after learning of it from Professor Alex Wyglinski, his faculty advisor, who told him that Ferreira was leaving WPI. Wyglinski and others involved in the effort wanted to continue the research.

NASA solicited research ideas to continue the project and awarded a grant to a proposal that was a collaboration between WPI and Penn State.

The work Li did this summer is serving as the basis for his master's thesis.

"I pretty much worked on experimenting with improvements to the algorithm," Li says. "It looks like it was an improvement to what we got a year ago. Because of the way things work it isn't like black or white, but it seems to be doing better."

Li says he enjoyed working at the NASA site.

"I think it shows that I have the raw skills of being able to work with machine learning in a way that's more than just classwork type things, and also the ability to enter a project that was already under way and to be able to figure it out and figure out where my place in it is and to make an improvement on it." -Max Li

"It really helped me contextualize a lot of the machine learning things. If I were to just try to do it on my own, I would just be doing pet projects that don't necessarily have that much of a reasoning behind them. Working on this project is really concrete. This is something that's actually useful.

"Going to the actual NASA compound was interesting, just based on all the security and stuff and being able to actually see some of the test facilities. Seeing the work that people were doing there was pretty cool," Li says.

Drawn to Math and Science

Li says he always knew he wanted to do something math and science-related. “I also like the idea of engineering in the sense that it works with actually making things," says Li, 23, of Andover, Mass. He had developed some computer science background and "circuit knowledge" before coming to WPI, and found he had a strong interest in those areas, so he ended up getting his bachelor's degree in electrical and computer engineering at WPI in 2017.

His Major Qualifying Project, "Multi-Purpose Aerial Software Defined Radio," involved working as part of a five-member team to develop an aerial platform for spectrum sensing, which could be used for lost hiker location and channel monitoring. It was a finalist for the ECE Provost MQP award.

"My time at WPI has been great," he says. "All the projects were very helpful."

His WPI studies have been augmented by working as a signal processing intern at Systems and Technology Research of Woburn and as an undergraduate research assistant in WPl's Signal Processing and Information Networking Laboratory, or SPIN Lab.

Li says his work at NASA has highlighted the knowledge and skills he has developed.

For him, the NASA experience is "a real applied example of having worked with a pretty complicated system and just being able to self-drive and teach myself about what was going on.

"I think it shows that I have the raw skills of being able to work with machine learning in a way that's more than just classwork type things," Li says, "and also the ability to enter a project that was already under way and to be able to figure it out and figure out where my place in it is and to make an improvement on it."