As a third-generation alum who “never managed to leave WPI,” Toby Bergstrom has become rooted in the Worcester area, and he’d like to see it stay strong economically. 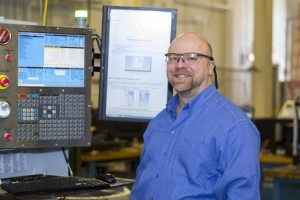 One way to do that is to build on the city’s rich history as a center of manufacturing. Granted, most traditional factory jobs have been lost to automation or cheap labor overseas, but new ones have emerged—and they’re going begging.

One problem is that there are not enough skilled workers to fill today’s specialized positions.

“I hear it time and again,” Bergstrom says of conversations with business owners and managers, “‘I would buy another piece of capital equipment if I could find someone to run it.’”

Bergstrom, operations manager of manufacturing laboratories in WPI’s Department of Mechanical Engineering, noted that state figures from last spring showed there were 130,000 unfilled jobs, even while 250,000 people were unemployed.

WPI already runs a program with the Massachusetts Manufacturing Extension Partnership to teach unemployed workers to use equipment in the school’s manufacturing lab, with students hired to do the training. Despite a 90 percent placement rate for workers retrained in the program, it’s difficult to even field a class of 36 workers, according to Bergstrom.

He attributes part of the problem to manufacturing’s image, with people remembering the “bad old days.”

“They still envision giant factories that look like prisons,” he says. “And they see the dirty jobs and the sooty workers coming out of factories.”

Another problem is that most of the manufacturing employers in Massachusetts are small companies with limited resources. 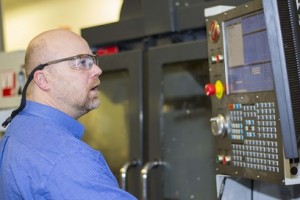 To address this problem, Gov. Charlie Baker late last month charged three of his cabinet secretaries with finding ways to align the resources of institutions like WPI to help these small manufacturing companies meet their growing needs. And MassDevelopment, the state’s finance and development agency, has launched the Manufacturing Innovation Grants Program, which connects small- and medium-size companies with four innovation centers to help them build business.

One of those innovation centers will be at WPI, run out of the business school’s new Center for Innovative Manufacturing Solutions. Bergstrom says a small manufacturer who needs help with a new process, business strategy, or technical issue can turn to the collaborative, which will find resources at WPI to address the need. In many cases, students will work as consultants.

“There may be more benefit to the students than there is to the university as a whole,” Bergstrom says. “They get tremendous opportunities to learn things that are of real value out in the field.”

The program is not geared to specific industries, and companies must put up money to participate. However, Bergstrom says, “for every dollar a company invests to solve a problem, MassDevelopment will kick in another three dollars. There is no direct funding for WPI until it begins working with a company.”

Bergstrom sees modern manufacturing as a stabilizing force in the local economy, and he stresses the difference between creating wealth by making things and perceiving wealth in businesses that go through boom and bust cycles, such as real estate.