Travis Roy has always been a goal setter. 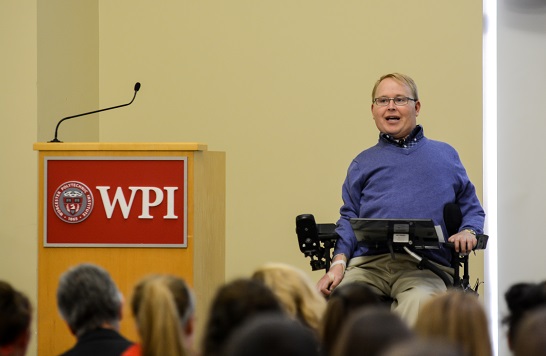 Travis Roy shared his story with about 150 people in the
Odeum in the Rubin Campus Center.

As a boy, that meant someday playing hockey for a top Division 1 college, moving on to the National Hockey League, maybe even making the U.S. Olympic team.

Now, Roy’s goals are much more modest, but no less important to him. One day, he’d like to brush his teeth again, or perhaps drive a car.

Roy crashed headlong into the boards just moments after stepping onto the ice in his first college hockey game, and the injury left him a quadriplegic. Ever since that life-changing mishap almost 20 years ago, Roy has been doggedly working his way back to independence. Tuesday, he shared his story with about 150 people in the Odeum in the Rubin Campus Center in a talk hosted by the Robert A. Foisie School of Business. 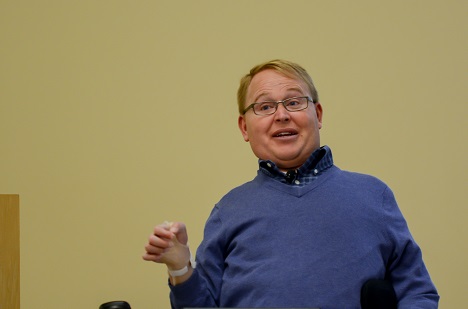 Travis Roy described how his life-changing accident occurred
just 11 seconds into his first shift as a Boston University hockey player.

Near the beginning of Roy’s presentation, he showed a video of the accident that occurred just 11 seconds into his first shift as a Boston University hockey player. Roy races to a corner of the rink chasing the puck, then falls behind an opposing player into the boards. Soon he’s surrounded by players, coaches, officials, a doctor and his father. It’s hard to watch the video as Roy sits below the overhead screen in his motorized wheelchair.

“I think I knew almost immediately,” he recalled, adding that he told his father that his neck hurt and he couldn’t move.

October 20, 1995, began as the best day of Roy’s life. He was tapped as just a freshman to start his Division 1 hockey career. He got his first custom-made hockey stick. The national championship banner from the previous season was raised at BU as his parents and high school coaches watched in the stands. And it ended when he fell and fractured his fourth and fifth vertebrae.

It hasn’t been easy. 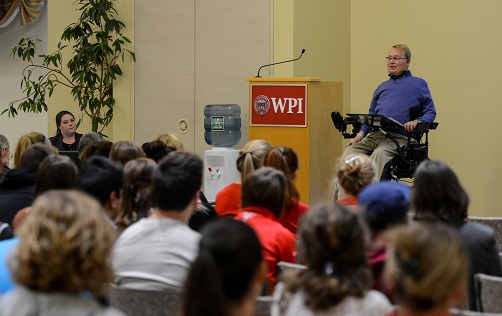 After undergoing rehab, Travis Roy earned a degree in
communications at BU and established the Travis Roy
Foundation, which has raised $3 million for research into spinal
cord injuries and a similar amount to help quadriplegics
become more independent.

Roy spent four months in the hospital in Boston, then six more in rehabilitation in Atlanta. It was in rehab that he decided to take control of his life, saying it was hard not to be positive with the support that surrounded him and fundraising on his behalf, including a donation of $7.23 from a kid’s piggybank.

Even though the reality of his situation set in once he sat in a wheelchair, he told himself, “A day in a wheelchair is infinitely better than lying in a hospital bed.” Plus, others in rehab were worse off. “I was one of the lucky ones,” he said.

Rather than be bitter or resentful, he set new goals from himself: finishing rehab, going back to school for his degree, becoming as independent as possible and making a living.

Progress came slowly. He told how it took weeks to learn to feed himself, using his right arm, of which he has partial use. That first bit of food was a bagel, spread with cream cheese and butter. Difficult as it was, Roy derived a sense of satisfaction from that small accomplishment.

After rehab, Roy earned a degree in communications at BU; began the Travis Roy Foundation, which has raised $3 million for research into spinal cord injuries and a similar amount to help quadriplegics become more independent; wrote a book, 11 Seconds; and became a motivational speaker, with 35 to 40 engagements a year.

The message from his talks is aimed at a general audience, not just people with disabilities.

“I believe, in life there are times when we choose our challenges and there are other times when the challenges simply choose us,” he said. “It’s what we do in the face of those challenges that define who we are and, more importantly, what we can and will become.”

“I can still laugh. I can still cry. I can still enjoy the people around me,” Roy said at the end of his talk. “I’m still the same Travis I always was, except now I’m rolling through life instead of skating.”