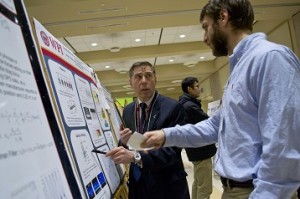 More than 200 master’s and PhD students took over the upper floor of the Rubin Campus Center for the all-day competition. The morning session featured posters in Business and Social Science, Life Sciences and Bioengineering, and Science; the afternoon session focused on research in engineering.

The competition assesses the quality and impact of students’ research as well as their abilities to clearly explain their projects and present them using effective and visually appealing posters.

One of the most eye-catching posters belonged to Melissa Mobley, a PhD candidate in biology and biotechnology. The poster, titled “The Buzz about Bee Behavior: Taking an Interdisciplinary Approach to Assess the Role of Bumblebee Declines,” featured a full-size photo of a bumblebee gathering nectar from a flower in the background.

Mobley was participating in the GRIE competition for the third consecutive year and adeptly explained the scope and impact of research, which involves gauging the effect of pathogens on task switching abilities of native bumblebee species, and could help explain why bee populations are declining at alarming rates.

She credited the GRIE with helping her hone her presentation and speaking skills.

“This is a great experience that has enabled me to learn how to communicate my research more quickly and effectively,” said Mobley. “I also really enjoy getting feedback from the judges.”

Maryam Hasan, a PhD candidate in Computer Science, agreed, and added that that the GRIE boosted her confidence in her ability to talk about her research with others.

Hasan is one of several students who presented research involving an increasingly relevant topic—social media. Her project, “Using Hashtags as Labels for Supervised Learnings of Emotions in Twitter Messages,” sought to develop a model that could detect emotions of users based on Tweets. 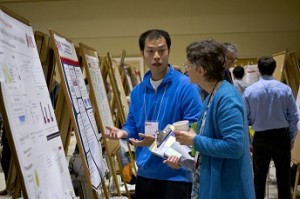 “The model could be used to find out how people are responding to events like the recent controversial verdict in Ferguson, Missouri,” said Hasan. “We could also use it on a specific population, such as seeing how WPI students feel during the week of final exams.”

Patrick Malone, a master’s student in Civil & Environmental Engineering who was taking part in the GRIE for the first time, said that what he found most valuable about the competition was the poster itself.

“Showing your research on a poster is a real challenge because you have such limited space. You really have to plan how to best visually present your project and determine what is most relevant,” said Malone.

Students weren’t the only ones who got in on the action at the GRIE—more than 80 judges volunteered their time to score student presentations and provide feedback. The judges included WPI faculty members, graduate students, and alumni, as well as corporate partners.

Fred Looft, professor of electrical engineering and head judge of the GRIE, noted that all of judges were excited to take part in the event and check out some interesting research.

“There’s so much enthusiasm here,” says Looft. “I look around the room and can tell that the judges are really connecting with students, taking an interest in projects, and providing useful feedback.”

Once all of the judges’ scores are tallied, up to 60 finalists will move on to the second round of the GRIE on April 13, 2015. GRIE finalists, along with the People’s Choice Award winners for morning and afternoon sessions, will be announced and available online through the Office of the Provost this afternoon (Dec. 11).