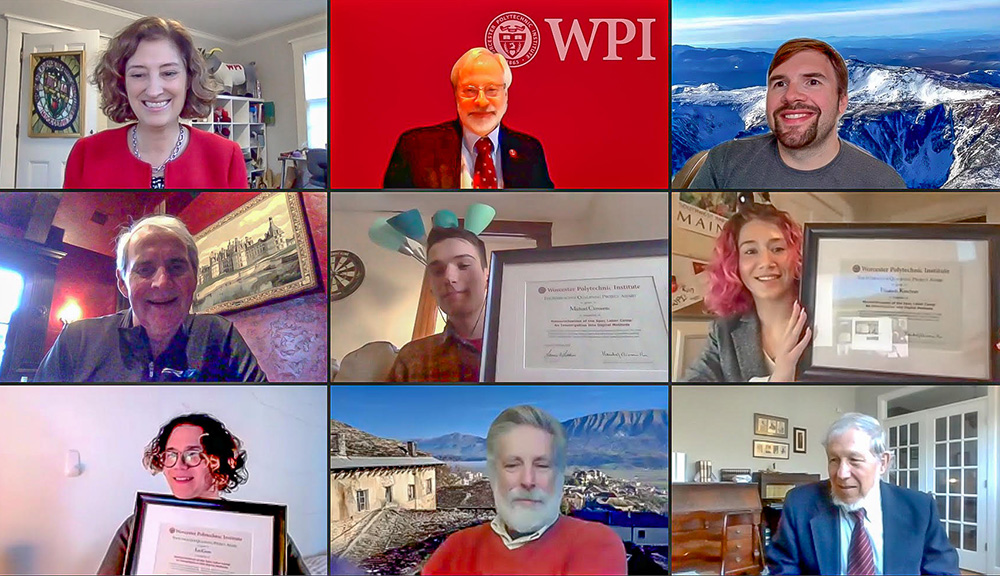 Each year WPI students, typically in their junior year, complete an Interactive Qualifying Project (IQP) as part of the academic requirements for graduation. Unlike an academic course, this nine-credit-hour requirement involves students working in teams to tackle an issue that relates science, engineering, and technology to society. Not only do these in-depth IQPs teach valuable collaboration skills sought after by employers, they offer real-world contributions addressing problems locally and globally.

This year, the field was pared down to five finalists from a total of 60 submissions to be considered for the President’s IQP Award, and on March 5 five student teams gave their final presentations in front of a panel of judges to determine the winners of the 2020 awards. Presented annually, the President’s IQP Awards are given to student teams whose IQP work is determined to be outstanding in its focus on science, technology, and society.

The 2020 President’s IQP Awards presentations were held virtually, with student teams presenting for about 15 minutes each to 69 attendees, including a panel of judges, faculty, students, parents, and alumni. Teams used slides, charts, and videos to frame their work. Presentations were followed by questions from the judges, who were tasked with evaluating submissions on the basis of conception, performance, and their focus on the relationships among science, technology, and the needs of society.

Those selected as finalists:

And the Winner Is…

While all of the finalists are indeed winners, there can be only one project and team selected by the panel of judges to accept the award. The IQP taking home the top spot was Memorialization of the Spaç Labor Camp, a project that focused on saving the rapidly deteriorating Spaç Prison, a former Albanian labor camp that housed political prisoners for nearly 30 years under the country’s communist regime. According to the team, preserving this historically significant site is important because of the lessons it can teach future generations about the atrocities suffered by many innocent Albanians.

Using elevation data, military maps, and satellite photos, the team created a 3D computer model of the site, which they incorporated into a website. Information obtained during the team’s seven-week, in-country experience included prisoner testimonies, archival documents, and photographs—all used to personalize and preserve experiences to facilitate constructive conversations and collective healing.

In her remarks about the winning project, President Leshin said, “Well done! We were incredibly moved by the work that you did, and it personifies what the IQP represents. It brings it all together—the impact of the work on all of you was impressive to see, and it’s a great integration of technology and humanity.”

Five Experts Bring Diverse Backgrounds to the Panel of Judges

WPI President Laurie Leshin | Leshin is the 16th and first woman to lead WPI. Under her direction, the university has steadily built its reputation as the global leader in project-based learning, and was recognized by the Wall Street Journal/Times Higher Education College Rankings for best balancing excellence in teaching with groundbreaking research.

Kola A. Akindele |  A seasoned external affairs professional, Akindele is the assistant vice president for external relations and strategic partnerships at WPI, where he oversees the corporate foundation community, and advises leadership on regulatory and legislative matters. He hold a JD from Northeastern University.

Jeremy Hitchcock |  A 2004 graduate of WPI, Hitchcock holds a degree in management information systems. He is the founder of Dyn, a company specializing in Internet infrastructure, later acquired by Oracle. His focus is now on Minim, an AI-driven WiFi management and IoT security platform. He serves on the WPI Board of Trustees.

Reverend Dr. Debora Jackson  |  A member of the university’s Hall of Luminaries, Jackson earned two master’s degrees from WPI and is dean of the university’s Foisie Business School. Following a career in software engineering, she earned a Doctorate in Ministry, and serves on WPI’s Board of Trustees.

Mark Whitley  |  A 1973 WPI graduate, Whitley earned a degree in chemical engineering and later revolutionized the energy industry with fracturing technology. He held the role of president and CEO at Chisholm Energy Holdings, headquartered in Fort Worth, Texas, until his retirement last fall.