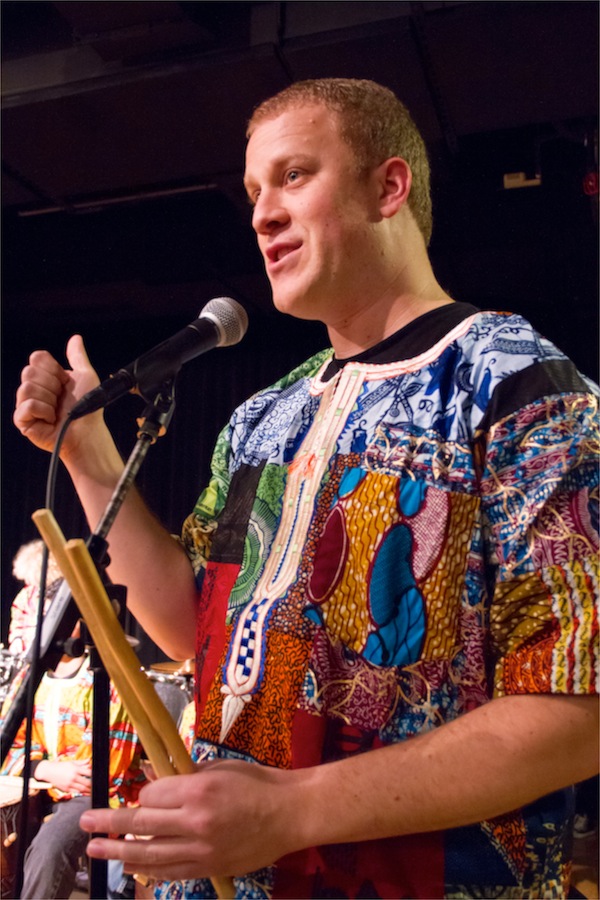 How do you speak to children about jazz? Ask WPI’s Richard Falco, director of jazz studies. He is the music coordinator and narrator of Conversations in Jazz, a 60-minute production presented by Mechanics Hall, as part of its “Brown Bag Concerts for Kids” series.

“The program presents me with an opportunity to reach out to young kids in an exciting and interactive program,” he says. “It is fast-paced and the students are asked to engage on many levels. What a treat for us to bring this to them. I love this program.”

“It begins with antiphonal African drumming in the balcony of Mechanics Hall,” Falco says. “Then moves to the main stage where through ‘conversations’ the student audience is taken through the entire of history of Jazz, from its African roots, to New Orleans, Big Bands, Bebop, Civil Rights, and World Music, each with a musical demonstration from the ensembles.”

The program Conversations in Jazz is presented every other year; this is the eighth production for WPI. The invitation has been extended to children in Worcester-area schools, grades 3-6. There are two shows, 9:30 and 11:30am. “There are one thousand kids taking part in first show and more than 500 already for second,” Falco said. It is free and open to the public.”

Jeremy Cohen is the new director of the WPI African Percussion and Dance Ensemble (APDE) and this is his first time performing in Conversations in Jazz. “I was hired as the director in the spring, but I’ve been involved with West African music for years. Through my organization, ThisWorldMusic, I direct the Ghana study abroad program at UMass Amherst. I also teach and perform throughout the U.S.”

Cohen says APDE is a dynamic performing ensemble that meets every Tuesday night on the WPI campus. “There are roughly 12 members in the group,” he says. “We work primarily on preparing a repertory of dance-drumming and vocal music from Ghana, West Africa. No prior experience is necessary to join.”

“The theme of the concert being ‘Conversations in Jazz,’ we are going to demonstrate the connection between the drums and the human voice in traditional West African pedagogy,” he says.

When asked how children respond to what APDE is offering, Cohen says, “In my experience presenting African drumming, people of all ages and backgrounds respond to drumming. I think the kids are going to love it.”

Trumpeter Jerry Sabatini is the leader of the Sonic Explorers, a critically acclaimed ensemble with multiple CDs to its credit. “Conversations in Jazz is a collaborative event,” he says. “Sonic is an example of a classic jazz combo and original new music ensemble.”

Andrew St. Jean ’13 played trumpet with WPI Stage Band and the WPI Jazz Ensemble for four years. “I’ve done Conversations in Jazz several times and it’s always a ton of fun. Believe it or not, the kids are probably the most enthusiastic audiences we have at any of our performances all year.”

“This concert is really something special,” says saxophonist Anthony DeCicco ’14. “It gives an opportunity for children to be exposed to a great American art form. This is probably one of the most rewarding concerts of our outreach initiative because kids who may have never had the opportunity to listen to jazz may even one day pick up an instrument themselves to become the next Miles Davis.”