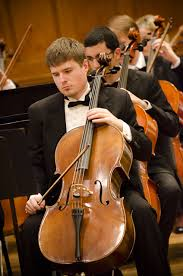 The Pops concerts are a long
standing annual tradition at WPI.

• It’s the Pops, as in “popular” concerts, and there are two of them on the same day, Saturday, Nov. 1. The first happens on campus when the WPI Concert Band and WPI Stage Band take to the stage at Alden Hall at 3 p.m. The second is the WPI Stage Band and Medwin String Quartet performing at Mechanics Hall beginning at 6 p.m.

Dagnello is one of the most established jazz artists on the local scene. She has two CDs to her credit. “I’m very excited to be joining the extremely talented young players from the WPI Stage Band for three tunes during their Pops concert,” she says.

For the Alden performance, Dagnello will be singing All or Nothing at All, from the Frank Sinatra songbook, written by Arthur Altman and Jack Lawrence; Relax Max, a Latin-flavored number sung by Ella Fitzgerald, by Al Frisch and Syd Wayne; and Bewitched, Bothered and Bewildered, a classic by Rogers and Hart. 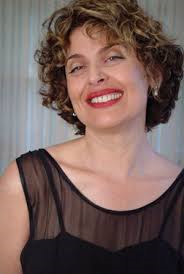 “I enjoy sharing the big band genre experience with the students and exposing audiences to this important period of jazz history,” Dagnello says. “It is always fun and a wonderful learning experience to work in collaboration with Rich Falco [director of the Stage Band], as well.”

Douglas Weeks is the director of the WPI Concert Band. He says the program at Alden will be light and varied. It will also have a particular Latin spice added for more than a few good measures.

“As the bands are working toward a possible tour to Puerto Rico, this year’s theme revolves around music of that region,” Weeks says. “Our guest artist is Miguel Almestica. He will be performing percussion with the Concert Band and Stage band.”

Almestica is a master conguero, or conga drummer, and leader of Los Pleneros del Coco, a critically acclaimed ensemble that specializes in “bomba,” “plena,” and other rhythms from his native Puerto Rico. The Concert Band will perform Almestica’s composition Oye Negrita.

They will also play Tico, Tico, by Zequinha de Abreu; October, by Eric Whitacre; Ride of the Valkyries, by Wagner; Angels and Architecture, featuring soprano Briana Huie ’16; and Mambo from West Side Story, by Leonard Bernstein.

The Mechanics Hall Pops Concert is called “A Night of Music.” It is a fundraiser for the New England Center for Children, a private, nonprofit organization serving children with autism and other related disabilities, located in Southborough. 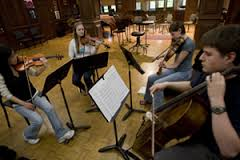 The Mechanics Hall Pops Concert,
“A Night of Music,” is a fundraiser for
the New England Center for Children.

The Medwin String Quartet will play for the cocktail hour and the WPI Stage Band will offer a 20-song performance for the dancing fundraiser. Violinists Emily Viloudaki and Andrew Lewis, violist Shawn Wile, and cellist Eric Cheng will perform a variety of repertoire including Mozart and Bach, tangos by Michael McClean, and Scott Joplin rags.

“It is a tremendous honor to be included in this important fundraising event for The New England Center for Children,” says Lynne Canavan, Medwin String Quartet coach. “It is also a wonderful opportunity for the students to share their time and talent and have the opportunity to perform for such a large event in one of the greatest concert halls in the world, Mechanics Hall.”

This is the 11th year that WPI ensembles have played the concert. “WPI has been involved since the inception and has become the signature sound of NECC’s fundraising galas,” says Rachel Norberg, special events coordinator for the organization. “Under the direction of Professor Rich Falco, they have consistently provided professional entertainment that has impressed and delighted guests.”

In appreciation of Falco and Dagnello’s participation in the annual event, NECC is presenting them with an award.

“Professor Rich Falco and Linda Dagnello will be honored this year with NECC’s prestigious Children of Promise Award, which recognizes individuals who have made significant contributions to NECC’s mission,” says Norberg. The award will be presented at NECC’s Annual Fund Awards Reception on Monday, Dec. 1, at the Seaport Hotel, Boston at 5:30 p.m. Previous recipients of this award include the late senator Edward M. Kennedy and former governor Michael S. Dukakis.

Dagnello says, “It has been a privilege to be part of this event for the past decade, and to support the amazing, multi-faceted work that the school does for its children with autism and their families.”