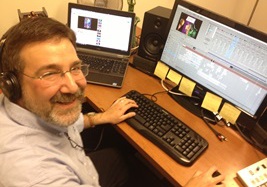 Calling it an unforgettable experience, Worcester Polytechnic Institute (WPI) professor Keith Zizza served as the audio lead for Marvel Puzzle Quest, a puzzle/action game app, in which he developed hundreds of sound effects for the X-Men, the Avengers, and other heroes and villains.

“It was truly a blast to create sounds for the X-Men, Avengers, Dr. Doom, Venom, and a host of other characters in the Marvel Universe,” said Zizza, now in his third year as professor of practice in the Interactive Media & Game Development program at WPI. “I was blown away. As a kid I read a lot of comic books and became steeped in the whole mythical lore. It’s really exciting.”

Marvel Puzzle Quest calls for matching three or more same-colored gems on the game board to power up your assembly of Marvel heroes while fighting off villains, who are also taking gems from the board to attack your heroes.

For this project, Zizza, who specializes in game audio at WPI, took audio samples and put them into a computer where he created and set up combinations of sounds to make them more tactile and distinctive, and also to hear how they interact with one another in the game.

For example, he might find the raw sound effect of a hammer strike and then “sweeten it” by adding sounds underneath the original one for a more exaggerated, interesting texture. “There are all kinds of little tricks that we do,” he said.

Zizza’s road to being tabbed for the project comes from networking contacts as he’s spent more than 20 years working in the digital audio industry. He learned of the opportunity through Demiurge Studios, an independent video game development house in Cambridge, Mass., which was working with Marvel to develop the app.

Zizza said his students see benefits from this project, as well.

“I maintain my standing in game development by being a consultant on these types of projects, and I’m able to bring back new ideas, skills, and techniques to my students,” he said. “With our seven-week terms, in many cases we have to retool the lecture again in the lab because the tools and the techniques have changed.”

“As a professor of practice, Keith Zizza is really at the intersection of academics and industry for teaching aspiring game students,” said Claypool. “Professors of Practice at WPI are supported and encouraged to continue to work in the field, as Keith does. This empowers him to bring his considerable talents to bear in real-world projects.”

The Interactive Media and Game Development Program at WPI provides an outstanding education in the art, technology, and design principles of creating computer games and other forms of immersive, engaging digital media applications.

For Zizza, one of the most exciting moments of the project was serving as the voice of the Incredible Hulk.

As it turns out, Zizza said he couldn’t find “any good grunts” in his sound effects library. “So I took some pitch-shifting software and manipulated my voice down and altered some of the frequencies to become the Hulk,” he said. “It was quite an experience.”