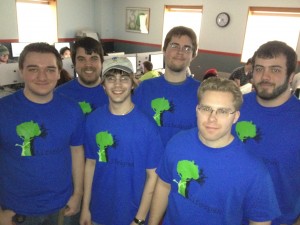 When a team of six WPI budding game developers captured best game honors in the Student Showcase at the PAX East “Made in MA Party” last Thursday, Michael Grossfeld had a simple reaction.

“We were ecstatic,” said Grossfeld, a WPI senior majoring in Interactive Media and Game Development and the project lead. “I was so thankful for my team for the fantastic amount of work everyone put in. We felt vindicated after working so hard on the game.”

The event, held at the Microsoft NERD (shorthand for New England Research & Development) Center in Cambridge, was run in conjunction with MassTLC, the region’s leading technology association. As part of the festivities, game developers participated in the 4th annual party to celebrate the local Massachusetts gaming industry and all it has to offer.

As Grossfeld explains it, the game – called “Lifespan” – initially started out as a game about time travel. Since September 2012, the team has been  brainstorming and designing a 3-D first-person puzzle game in which the user can affect an object in the environment using time. “That means you can take a tree and reverse it back to a healthy sapling,” said Grossfeld, a resident of Manchester Center, Vt. The game, which is available for free, is adapted for Windows and Mac systems.

There were four other participating teams, including another team from WPI, two from Becker College in Worcester and one from Tufts University.