President Laurie Leshin has been selected as the protagonist in a new series of comic books, titled Laurie of Mars. The series, which was inspired by Leshin’s @LaurieofMars Twitter handle, will chronicle the adventures of Laurie of Mars as she sets forth to solve the Grand Challenges facing the galaxy — with the help of her trusty sidekick Space Puppy Hudson, and the members of her Impact League. 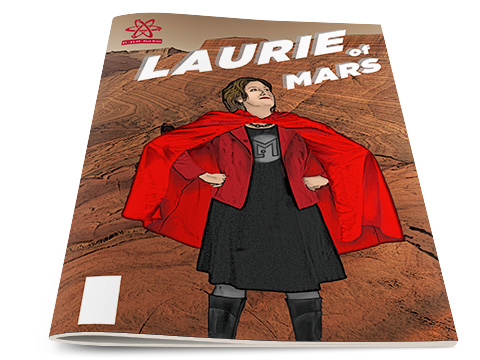 The Laurie of Mars storyline follows her mission to engage
the people of Earth in the STEM disciplines in order to make
the universe a better place.

To be published by Atomic Comics, the series will tell the story of how “Laurie” (her birth name is “4922 Leshin”) was born to Martian parents, but was sent to Earth when it became apparent that Mars needed the help of this planet’s Scientists, Technologists, Engineers, and Mathematicians (commonly referred to as “STEM Stars” in other galaxies).

As a “baby,” Laurie was launched Earthward – concealed in a meteorite that blazes across the night sky. Upon landing in the Arizona desert, she was raised by her planetary host parents – a cardiologist and a college administrator. Over the years she makes her way towards the presidency of WPI – the university widely considered by all Interstellar Governing Boards to “teach STEM the right way” through a rigorous and engaging project-based curriculum.

Readers will see how Laurie of Mars throws others off her path by “studying” space rocks as a geochemist and space scientist. They will watch her breeze through Arizona State University and Caltech, and see her begin her career at UCLA’s Department of Earth and Space Science, and eventually move into leadership positions at NASA (most notably in the Exploration Systems Mission Directorate – the organization responsible for future NASA human spaceflight activities – wink, wink) and finally into academic leadership at Rensselaer Polytechnic Institute.

The storyline follows her mission to engage more of the people of Earth in the STEM disciplines in order to build a bridge between the two worlds, and to improve conditions on both planets — and across the galaxy. In the series, readers will see Laurie of Mars, her sidekick, and her Impact League inspire people of all ages and backgrounds to learn – and to love – the STEM disciplines, and to use their knowledge to make the universe a better place.

If this weren’t April 1st, you might actually see the first issue hit newsstands on November 8th – the one year anniversary of Leshin’s Inauguration as WPI’s 16th President.

Watch the video of President Leshin explaining the reality of the situation here.