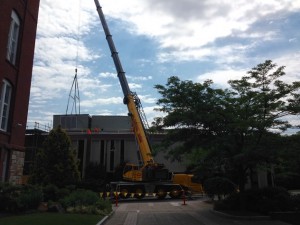 The Gordon Library renovation project has continued through E-Term, and is on schedule to be completed by mid-August. The construction project is replacing much of the building’s nearly 50-year-old heating, ventilating, and air conditioning (HVAC) equipment and controls, and is adding an upgrade and expansion to the main restrooms.

Four floors of the core mechanicals have been gutted, demolished, and replaced with modern pumps and valves. Most of the replacement pieces are now in place. Chris Salter, director of projects and engineering, says that the air handling units were the last major pieces to be installed, hoisted by crane to the rooftop this week. Equipment original to the 1967-era building, which has been patched as required for almost 50 years, is being replaced. Ductwork is scheduled to be fitted into place during the next stage.

Noise and dust have been a part of the progress. “The heavy dust phase is behind us,” says Salter. According to Don Richardson, acting director of library services, the people who use and work at the library have been very accommodating. The students and the staff in all four departments have “dealt with the noise, dust, and disruption very well. They are pretty resilient.  And the construction crews have been very accommodating to the people in the building.”

Although the study areas have been limited over the summer, the tech suites and classrooms, multimedia lab, Anderson Labs, and the Helpdesk have remained accessible. As the equipment is installed, the areas used for the temporary equipment laydown and staging will be cleared, and gradually reopened to the public.

The main restrooms are being upgraded behind temporary construction walls. The framing and drywall installation process started last week.

A minor amount of work will remain after the turnover, including the commissioning of the heating system, which will not be possible without a few cycles of weather extremes. A final major cleaning and shifting and reassembling of furniture will still be needed, but the bulk of the visible project construction will have been completed by the time the students return for classes. Salter remains cautiously optimistic, and says, “Considering the complexity of completing this large project in an occupied building, I am happy so far.”

The library remains open from 8 a.m. to 6 p.m. Monday through Friday.