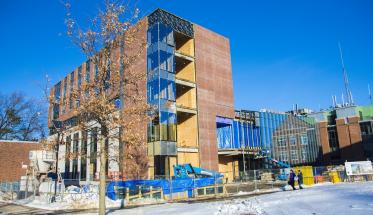 WPI is just six months away from the projected August opening of the $49 million, 78,000-sq.-ft. Foisie Innovation Studio and Messenger Residence Hall on the Quad. Although it’s hard to tell, now that much of the work is taking place inside the building, the project is on schedule, with scores of skilled tradespeople working every day to help bring it to fruition.

The five-story building will provide state-of-the-art academic space as well as an additional 140 beds, supporting the university’s efforts to expand both learning space and living space. 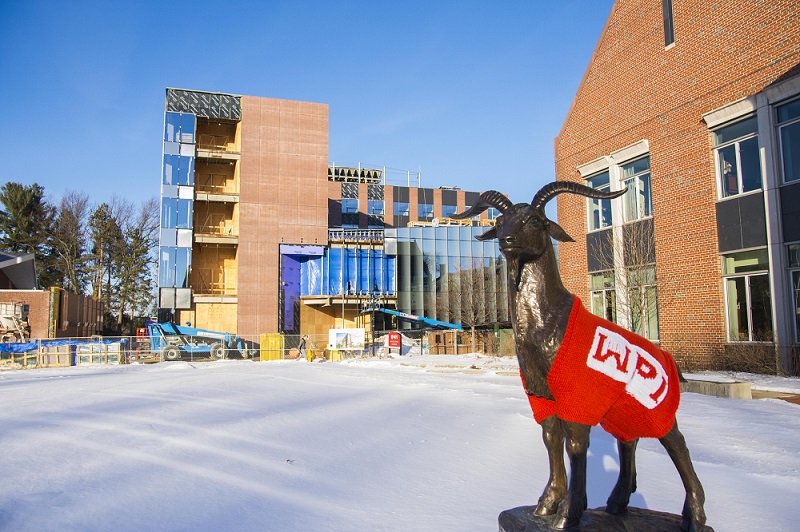 Gompei oversees construction of the newest building
on campus.

Messenger Residence Hall provides more on-campus housing options for upperclass students, something director of residential services Casey Wall says has been a goal for more than a decade—to provide university housing for about 60 percent of undergraduates.

“WPI has always been able to guarantee freshman housing,” Wall says. “But, we have upperclassmen who live off-campus and would rather be on campus, and we would love to be able to provide more on-campus housing for the students that are interested. The Foisie Innovation Studio and Messenger Hall are quite stunning and provide a lot of amenities.”

The building is directly on the quad, representing the “first time in a long time” that WPI can offer a residence in that location. With lounge space and tech suites on every floor, Wall says, “It’s going to be awesome.”

As awesome as Messenger Hall is, the Foisie Innovation Studio has some of its own awesomeness.

James Bedard, director of construction services for WPI who is overseeing construction, says this is the largest project on campus in at least 10 years.

For many years, WPI sought ways to renovate and reuse Alumni Gym, but it  ultimately proved impractical. The gym was razed in fall 2016—after numerous items were salvaged for later use—and work began on the foundation and frame of the new building in 2017.

“We buttoned it up over the summer in advance of the winter cold," says Bedard, "and the envelope [the exterior of the building] is almost complete, including the masonry work and glass curtain wall. There is temporary heat on the inside where the mechanical trades are working.”

The Foisie Innovation Studio will serve as a hub for WPI’s project-based curriculum, providing students with a space to immerse themselves in the WPI experience, and will also house academic spaces, including high-tech classrooms, an innovation and entrepreneurship center, and a global impact lab that will support the “hands-on” aspect of the WPI curriculum.

The building is named for Robert A. Foisie ’56, the university’s most generous individual donor, whose lifetime commitments have helped nearly 600 students realize the dream of a WPI education.

“We’ll bring in the furniture and equipment in August to make it a place to live and learn. Once furnishings are in place, I think people will really be wowed.” -James Bedard

Constructing a large building on the quad of a busy campus has its challenges, Bedard says. When demolition began, crews were conscientious about the noise and scheduled deliveries in the morning, notifying all drivers to take it slow on the active campus. Then, there was the issue of having large steel beams and other materials delivered to the quad.

“It is a tight site for delivery of steel and other materials,” Bedard explains. “It’s not easy to maneuver a truck carrying huge steel beams under Earle Bridge and around tight corners! The tradespeople and our subcontractors have been very thoughtful about how to minimize disruption, given the proximity to the quad and the Campus Center, and both Higgins Labs and the Bartlett Center.”

An intriguing feature of the building is the dozen grotesques built into the exterior wall of Harrington Auditorium overlooking a walkway adjacent to the new building. Depicting caricatures of people engaged in various activities—including a tennis player, an engineer, a musician, and someone reading a book—the original 34 carved pieces were set into the masonry façade of the old gym and were salvaged during the demolition, cut out, and removed with a crane.

“When we started getting into it and learning about it," Bedard says, "we heard that legend holds that some of the grotesques may have been modeled after some of the professors and administrators of the day.

“When we razed the gym, we had to sever it from Harrington Auditorium and rebuild the masonry façade on Harrington,” he says. “We took 12 of the grotesques and built them into the new wall, where they look over at the new building where Alumni Gym used to be.”

As the building’s hardscapes and landscapes are created, including a promenade, those on campus will be able to look up at the series of grotesques, Bedard says, but for now, they are covered up awaiting an unveiling ceremony.

Interior work will continue throughout the winter, including finishing installation of drywall and ceilings, along with painting and millwork. In the spring, Bedard and his team will be back outside to finish the façade, roof, hardscape, landscape, and walkways. Although much of the work on the project will go unnoticed this winter, come spring and summer, Bedard expects excitement to build.

“We’ll bring in the furniture and equipment in August to make it a place to live and learn,” he says. “Once furnishings are in place, I think people will really be wowed.”

Making Themselves at Home

At the 100th anniversary celebration of Sanford Riley Hall around Halloween, Residential Services raffled off a chance for two lucky students and their roommates to pick their rooms in Messenger Hall. Last week, the winners—first-year roommates Alex Hunt and Remy Watkin, and roommates Andrew Euredjian and Matthew Scott—toured the residence hall with Jim Bedard, along with Amy Beth Laythe, senior associate director of residential services, who has been active in the planning of the residence hall, to make their selections.

Hunt, a computer science and IMGD major, and Watkins, a mechanical engineering major, zeroed in on a room nearest the tech suite on the fifth floor. The room’s layout, the tech suite, the availability of gender inclusive restrooms, and “the awesome view” of the northwest end of campus from their window sealed the deal for them. “Windows that open and air conditioning,” they said. “That’s key.”

Euredjian, a computer science and robotics engineer, and Scott, a biology major, opted for a corner spot on the fifth floor, overlooking the Rubin Campus Center.

“This room has the biggest windows and a little more floor space,” said Euredjian. “I like the light and I think it’ll be cool to configure the furniture and make the most of the space.”