The Long and Winding Road

When you set out to take a life-saving discovery from the benchtop to marketplace, you’d better be prepared for detours.

WPI researchers are known for taking on real-world problems, which means the discoveries and innovations they create in the lab often have potential value in the marketplace. But when scientists and engineers decide to take the leap and become entrepreneurs, they can encounter unexpected twists, turns, and detours on the road to com­mercialization. Navigating such an uncertain path requires creative pivots in strategy. And it’s not uncommon for the product that makes it to market to be significantly different from the inventor’s original vision. That, in a nutshell, is the story of two WPI biomedical engineers with innovative medical technology and a dream of saving lives. Buckle your seatbelts as we retrace their eye-opening journey.

VitaThreads, a spin-off founded in 2012 by Professor Glenn Gaudette, PhD, and Associate Professor George Pins, PhD, of biomedical engineering, started as a perfect partnership of people and ideas. Pins patented microthreads made from fibrin and other biological polymers that have the ability to stimulate the repair of injured tissue. Gaudette, who explores methods for regenerating damaged heart muscle using stem cells, had begun experimenting with the use of the micro-threads to deliver stem cells to the heart. With Pins and Marsha Rolle, PhD, associate professor of biomedical engineering, he came up with the notion of growing human mesenchymal stem cells (hMSCs) directly on the threads and stitching them into the myocardium. The idea seemed to offer new hope to heart attack victims.

Subsequent experiments showed that the threads could deliver stem cells where they’re needed and get them to stay put. Stem cell therapy holds great promise for promoting tissue regeneration. But in the heart, the “delivery dilemma” is a significant obstacle. Other means of introducing the cells — such as injecting them intramuscularly or sewing seeded “patches” over the damaged area — are risky and unreliable. Only about 10 percent of the stem cells embed, and few of those survive. But in animal studies, about 60 percent of the cells delivered via microthread sutures took hold.

Despite that success, the heart would prove to be the wrong place for this small, inexperienced company to start its journey. “The heart is a risky organ,” Gaudette says, “and this is still a relatively invasive procedure. If you mess up in the heart, it can be a life or death matter.” The researchers reached out to VitaThread’s board of directors and its CEO Harry Wotton ’94 — a successful biomedical entrepreneur — as well as the team assembled to help guide them by WPI’s Tech Advisors Network Their advice? Come up with an initial application with a lower risk barrier.

Gaudette recalls, “At the time, a friend of ours had ruptured his Achilles tendon. He had to stay off it for six months. That’s a long healing process, and function is not always fully restored. That got us thinking about a new tack.”

In previous work, Pins had demonstrated that the micro-threads, all by themselves, could be bundled into cables and used as scaffolds to accelerate the repair of ligaments and tendons. His initial target was the knee’s ACL (anterior cruciate ligament). Adding stem cells would enhance the threads’ benefits, Pins and Gaudette theorized, since they’d promote the growth of new connective tissue. While animal studies were quite promising, the researchers hit a roadblock when they started exploring the potential for human trials. “The regulatory hurdles for using stem cells in humans are not trivial,” Gaudette says.

When they presented their concept to their FDA regulatory advisor, his curt reaction cut to bone: “Love the sutures,” he said, “but if you want to get through approvals quickly, lose the stem cells.” He advised them to strip their medical miracle down to their MVP — minimum viable product — a business strategy that involves rolling out  the most basic form of a technology and leaving more advanced features for later. For VitaThreads, the MVP was the unadorned microthread suture. The group that had been advising Gaudette and Pins suggested they shoot for an equally simple initial application: stitching up skin.

The blow hit Gaudette the hardest. “Compared to operating on a beating, contracting heart, repairing a tendon is basically just sewing a rope together,” he says. “It’s still interesting, but to go from that to stitching up skin...,” he pauses, the disappointment audible in his voice. “I’m a cardiac guy; I cut through the skin to get to the heart. When I’m done, I let my students close up.”

Accepting the realities of the regulatory landscape, VitaThreads settled on its first application. Instead of  enabling surgeons to save the lives of heart attack victims or helping athletes heal faster from devastating injuries, their product, now known as the VitaSuture Wound Management System (VWMS), would help plastic surgeons complete face lifts, nose jobs, and eyelid revisions with a much-reduced chance of high-visibility scars. With more than seven million reconstructive and elective facial surgeries performed  annually in the United States, it is a sizable market.

In July 2014, the company reported on the results of its pre-clinical in vivo studies. When used with a rat skin incisional model, the sutures were completely absorbed within 14 days, about half the time required for conventional absorbable sutures, and with reduced inflammation. For human patients, those results promised faster recovery with fewer complications and a better cosmetic outcome.

“The heart is a risky organ and this is still a relatively invasive procedure. If you mess up in the heart, it can be a life or death matter.” 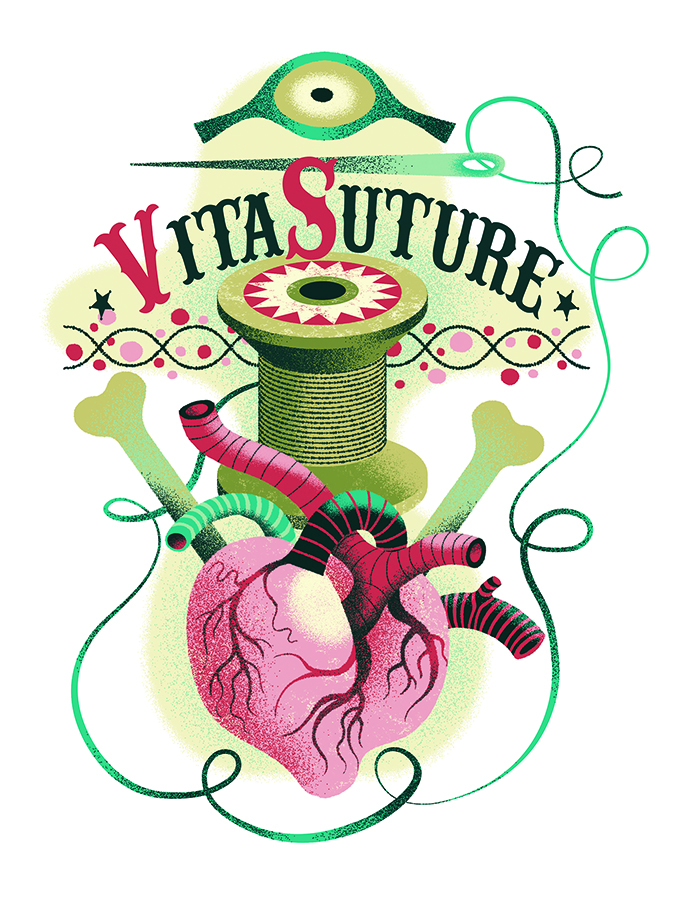 Inventors don’t stand alone at WPI. The spinoff of VitaThreads got a leg up from two initiatives designed to help university researchers become entrepreneurs.

The Tech Advisors Network (TAN) serves as a virtual incubator that connects aspiring entrepreneurs with experienced advisors who are alumni and friends of WPI. VitaThreads was advised by a dream team that included four alumni trustees, another alumnus with extensive technology marketing experience, and team captain Dave Mahoney, a serial entrepreneur and angel investor.

Mark Rice, PhD, professor in the WPI School of Business, says VitaThreads was among the inaugural cohort of companies to apply for TAN assistance, and its presentation attracted an outstanding advising  team that offered specific expertise on the regulatory approval process, networking, attracting financing,  and determining an initial market. “They all brought something to the table that we needed to hear,” says Gaudette, from advice on determining how much office space to rent, to a rundown of important questions to ask when selecting a patent attorney.

VitaThreads was also a pilot program for WPI’s Accelerator Fund, which offers early-stage investments in promising research ventures hatched from the TAN incubator. This seed funding can bridge the gap until a company is in a position to seek outside venture capital.

“We don’t just hand over the money,” says Todd Keiller, WPI’s director of intellectual property and innovation. “Projects must have clear commercial outcomes and must pass milestones at various stages.” An independent committee, composed of TAN members, makes the investment  decisions. Successful applications receive up to $100,000 (typical investments are expected to be between $30,000 and $40,000) in the form of a convertible note that must be repaid or converted to equity in the company.

With a modest $20 million research base, Keiller says, WPI outperforms larger institutions in the number of start-ups, invention disclosures, patents, and licensing. “We’re spinning out as many companies as Tufts and, for our size, we maintain a higher rate of IP disclosures than Harvard. We’re running four to five times the national average.

“I attribute it to WPI’s project-based curriculum. Our students are entrepreneurial, which makes our faculty more entrepreneurial. And it’s all over the board. I’ve handled IP disclosures from faculty members in music and biomedical engineering, and everything in between.”

Pins says he sees VitaThreads’ first product as a beachhead from which to advance to more complex offerings. “By establishing ourselves in the fibrin suture market, we’ve achieved a position with the FDA,” he says. “We’ve started with a small leap of faith, rather than a large one. Now everything we do to improve our invention will be taking baby steps, rather than making a giant leap from here to there.”

The next steps may include coating the threads with pharmaceutical agents to deliver targeted treatments, and adding anti-scarring agents to the skin sutures. Since stem cell therapies have been approved for animals, and veterinarians are starting to use them to treat arthritis and other orthopedic conditions in horses and dogs, VitaThreads is also pursuing veterinary uses of stem cell–seeded microthreads. “We still think there is great potential in the tendon surgery marketplace,” Pins says, “and we plan to go back there, too.”

But it’s clear that stem cell applications for people will have to wait. “You’re asking investors to make a bet on a bet,” Gaudette says. “They would be gambling not only that your company is going to be successful, but that the stem cell therapy is going to successfully clear the FDA hurdles.”

Still, both researchers say they believe they will eventually realize their original vision for VitaThreads. “Once the FDA approves our fibrin sutures, then getting their approval to add stem cells will be easier than if we had tried to get the combination from the start,” Pins says.

“We know there’s a big need for stem cell therapy,” says Gaudette, “and the heart is where we really want to be. We see this as the best strategy to get there.”

“By establishing ourselves in the fibrin suture market, we’ve achieved a position with the FDA. We’ve started with a small leap of faith, rather than a large one. Now, everything we do to improve our invention will be taking baby steps, rather than making a giant leap from here to there.”