The Weakest Link: It's Us

Engineers and computer scientists at WPI are helping protect digital data from the human factor.

Engineers and computer scientists have established cryptographic protocols to hide data from prying eyes. They have invented techniques for shielding wireless networks from intrusion. And they’ve developed guidelines for limiting access to sensitive information.

But every measure and countermeasure comes with its own costs and its own inherent weaknesses. Some of the weaknesses stem from the human factor: the fact that people use technology in ways that can lead to inadvertent leaks or attacks by malicious actors. WPI’s Cybersecurity Program draws together experts from computer science, electrical and computer engineering, mathematical sciences, and the social sciences to find new and innovative approaches to protecting digital data — approaches that take the human factor into account in one way or another. 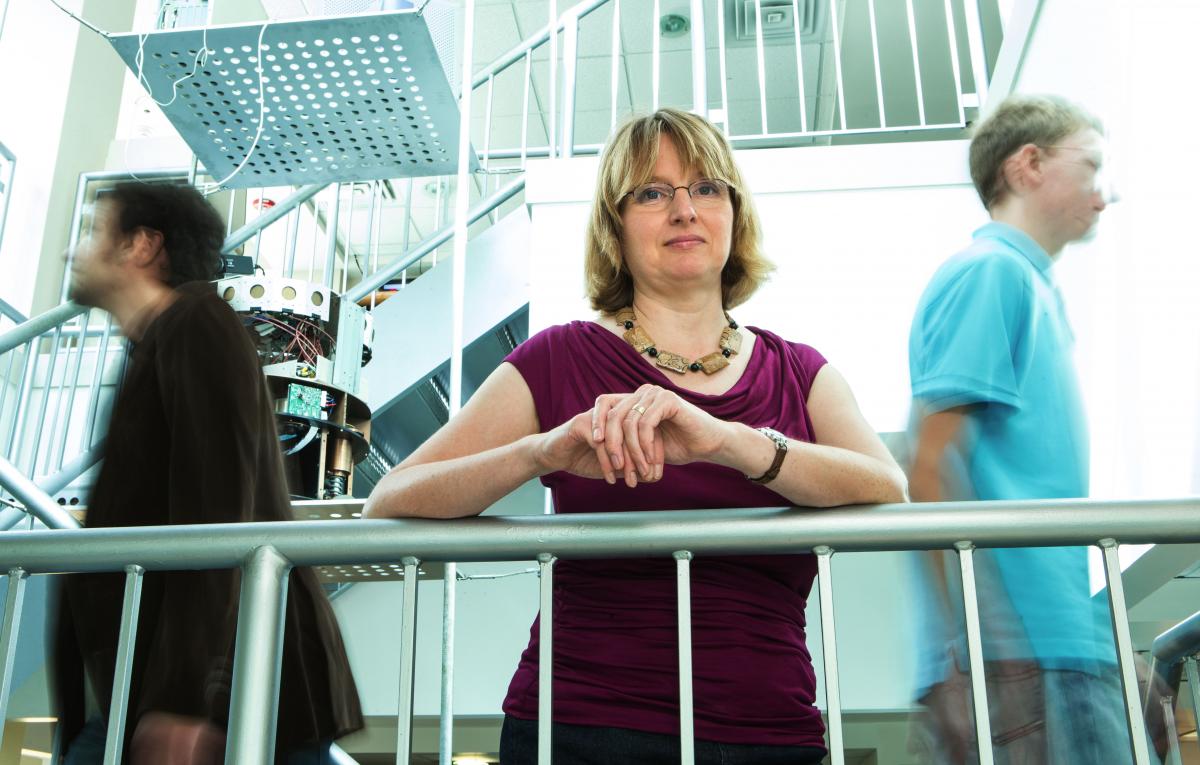 Kathi Fisler, computer science professor and founding director
of WPI’s Cybersecurity Program, builds tools to help users
understand the implications of their own security and privacy
settings, and to help developers understand the security
limitations of the systems they design.

“People are the weakest link in just about any security system,” says Kathi Fisler, associate professor of computer science and the founding director of WPI's Cybersecurity Program. That’s why students in the program are required to take at least one class that deals with human factors. It’s also why Fisler says it’s important “to not bug users with stuff they don’t want to think about” (and might, therefore, ignore), but instead bug them just enough so they will avoid compromising their own security.

Fisler herself has been building tools to help users understand the implications of their own security and privacy settings, and to help developers understand the security limitations of the systems they design. One of those tools, an application called Margrave, grew out of work she did with her husband, Shriram Krishnamurthi, a professor of computer science at Brown University, her WPI colleague Dan Dougherty, and Tim Nelson, a 2013 PhD recipient who is currently a postdoctoral research associate at Brown.

Margrave interrogates and compares access control policies, the sets of rules that govern who can see and manipulate the various data in a given system. Access control policies specify who can view patient records at a hospital, for example, or who has permission to change student grades in a university database. Such policies can be quite complicated, and are typically managed by human resources personnel who might not understand their full implications — or the unintended consequences that can ensue when they are altered.

Topics
Faculty
DEPARTMENT(S)
Cybersecurity
PROFILE(S)
Thomas Eisenbarth
|
Craig A. Shue
|
Krishna Kumar Venkatasubramanian
Title
How Do I Register a Trip On Behalf Of Another Traveler?
Body

You may register for someone else in one of three ways:

You must register through the International SOS TravelTracker Manual Trip Entry system for administrators, per the following:

2.  Contact globaltravel@wpi.edu and request access to the TravelTracker Manual Trip Entry system for administrators. You will be sent an email giving you access to enter this system.

3.  Once you have been given access by International SOS TravelTracker and you have created your profile:

METHOD 2: Manually adding a trip though a traveler's MyTrips account.

Margrave, however, can run through all of the various roles in an organization and determine precisely who has access to what. It can also compare different access control policies, or different versions of the same policy, to show how changes to the rules can affect privacy and security. That would be a boon to people who must configure their own privacy settings on platforms like Facebook, but have trouble understanding what those settings actually mean. (The “leakage” of private information from Facebook and other websites is one focus of cybersecurity research by Craig Wills, head of WPI’s Computer Science Department.)Margrave interrogates and compares access control policies, the sets of rules that govern who can see and manipulate the various data in a given system. Access control policies specify who can view patient records at a hospital, for example, or who has permission to change student grades in a university database. Such policies can be quite complicated, and are typically managed by human resources personnel who might not understand their full implications — or the unintended consequences that can ensue when they are altered.

Fisler has also been developing methods for mathematically analyzing applications to verify that they conform to the principles of usable security — principles that are meant to ensure that users actually have the ability to maintain their security on a practical basis. The principle of revocability, for example, might require that a user who has decided to share information can also choose to “unshare” it.

Krishna Venkatasubramanian, assistant professor of computer science, is also trying to develop security solutions that are both effective and user-friendly. In particular, Venkatasubramanian is looking for methods for securely coordinating medical devices, like x-ray scanners and heart monitors. Such devices have traditionally operated in standalone fashion, but are now beginning to communicate with one another across networks. 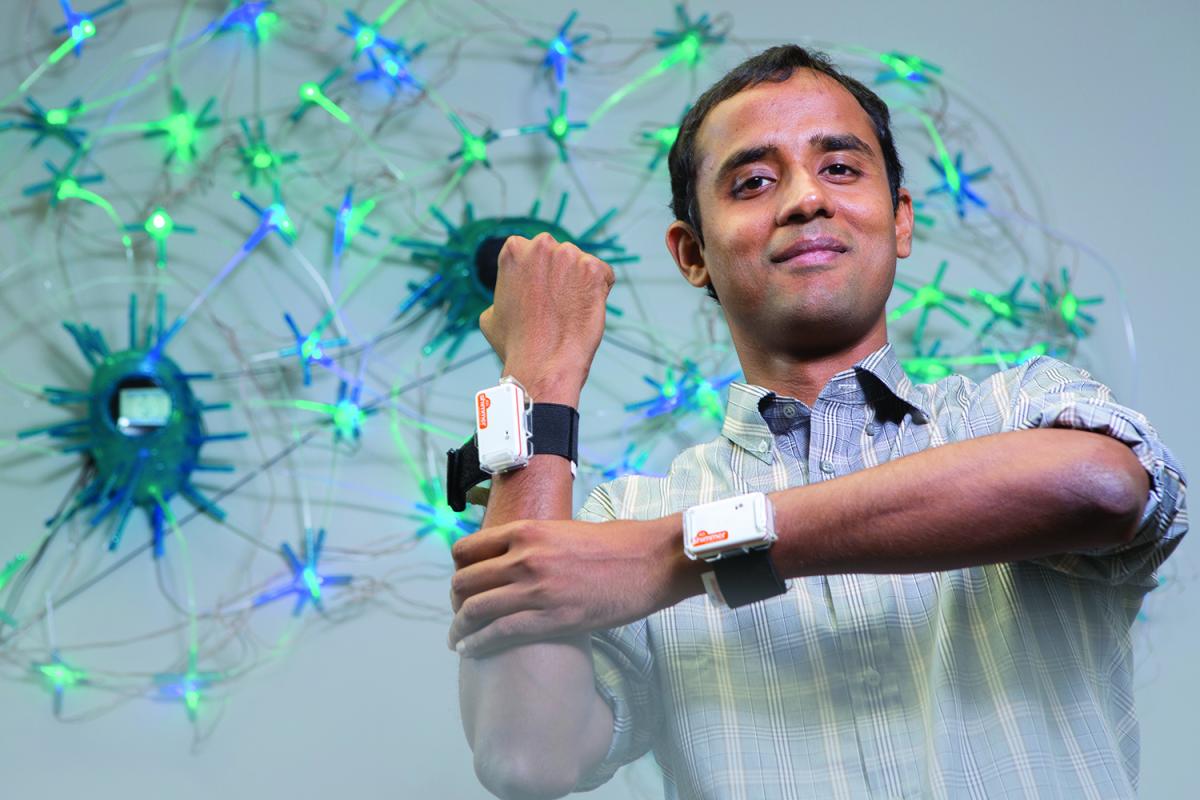 Krishna Venkatasubramanian develops solutions to security, privacy,
and safety concerns raised by interoperable medical devices—
pacemakers, sensors, and other medical technology that can
communicate over networks.

These interoperable medical devices (IMDs) can provide useful information to doctors and nurses, but they also raise a whole host of new security concerns. A sophisticated attacker could eavesdrop on an IMD network to glean sensitive patient information or interfere with specific devices; researchers have already hacked a pacemaker, for example, and fed it faulty instructions. IMDs, therefore, present a case in which cyberattacks could potentially lead to physical harm, or even death.

Consequently, IMDs need to generate alarms not only when a patient’s health is at risk, but also when security has been breached — alarms that won’t just add to the noise and confusion of a busy operating room or intensive care unit, but will help hospital staff make informed decisions. The devices also need to be able to enter some kind of safe mode until the problem has been solved, without simply shutting down or failing in a way that could harm a patient.

Together with colleagues at the University of Kansas and the University of Pennsylvania, Venkatasubramanian is working to improve IMD alarm systems with the help of a software “coordinator” — middleware that can interpret the data flowing from multiple devices, determine what kind of alarm should be sounded, and communicate that alarm to healthcare providers in a helpful way.

Sometimes, however, it’s best to remove users from the security equation completely. That’s one of the goals behind a system designed by Craig Shue, assistant professor of computer science, and graduate student Evan Frenn. 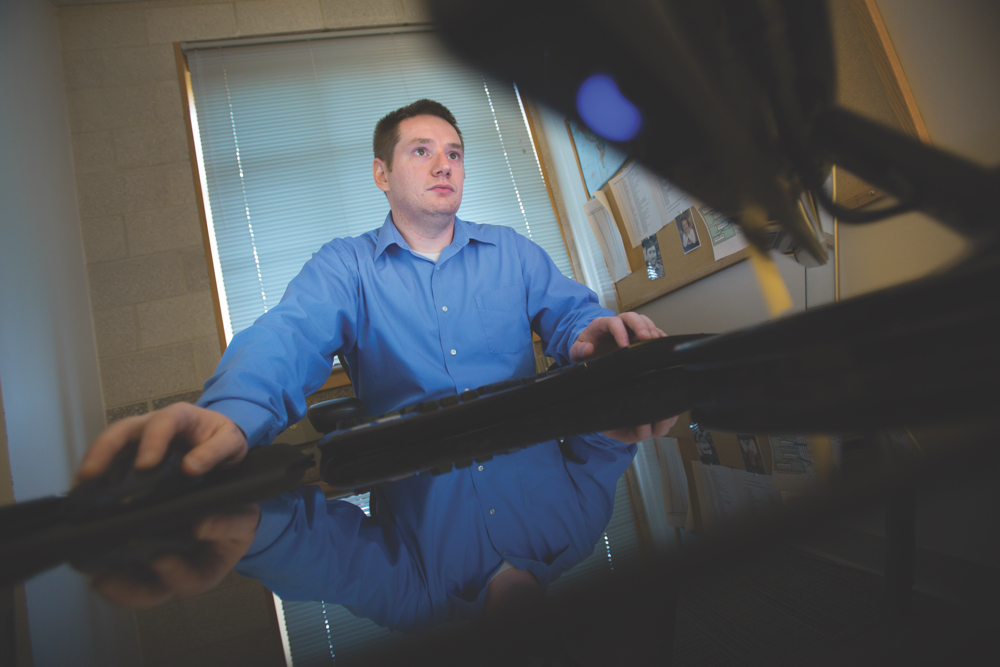 Craig Shue, assistant professor of computer science, is developing
methods to safeguard the security of virtual desktops that are
delivered to potentially unsecure client computers. The techniques
entail allowing only the virtual desktop software to run, while all
software installed on the client is kept quiet.

Shue notes that desktop virtualization services like Citrix can deliver entire virtual desktops to client PCs over the Web. But while the applications and services delivered to the client from the server may be secure, the operating system and applications that live on the client remain vulnerable to infection by malware. In a corporate environment, that can be a serious problem — especially when untrained users are largely responsible for their own security settings, and when more and more people are bringing their own devices to work.

Shue and Frenn have proposed a system in which only the software supplied by the server is allowed to run on the client machine. Everything else, including the client’s operating system — millions of lines of code rife with potential security vulnerabilities — is kept quiet, so that even if the client machine is loaded with malware, none of it can cause trouble. The client is able to attest, or prove, via cryptographic means that nothing but the served applications are running; and responsibility for security stays in the hands of the trained IT professionals who work on the server side.

Shue and Frenn’s scheme was made possible by recent improvements to secure microprocessors called trusted platform modules (TPMs) that are installed in many desktop and notebook computers. But what about all of the chips that live in the smartphones and smart cards that, increasingly, are being used to access bank account information, make purchases, and provide proof of identity?

While some of those chips employ cryptographic protections like digital signatures, which rely on both public and private keys, they are far from bulletproof. The cryptographic algorithms currently in use, for example, use the same private keys over and over again. By monitoring the electromagnetic emissions from the chips that process those keys, a clever attacker could, over time, collect enough information to crack the private key.

According to Thomas Eisenbarth, assistant professor of electrical and computer engineering, there are two ways to fend off such attacks: develop countermeasures to protect the standard cryptographic algorithms; or come up with entirely new algorithms that are less vulnerable in the first place. Having already investigated the former approach, Eisenbarth is currently working on the latter in his own laboratory and in the Vernam Group, a new partnership between Eisenbarth and fellow ECE cybersecurity researchers Berk Sunar and Lifeng Lai, and William Martin, professor of mathematical sciences (the lab is named for Gilbert Vernam, WPI Class of 1914, who discovered the only unbreakable encryption algorithm).

It’s always a trade-off between cost and security. 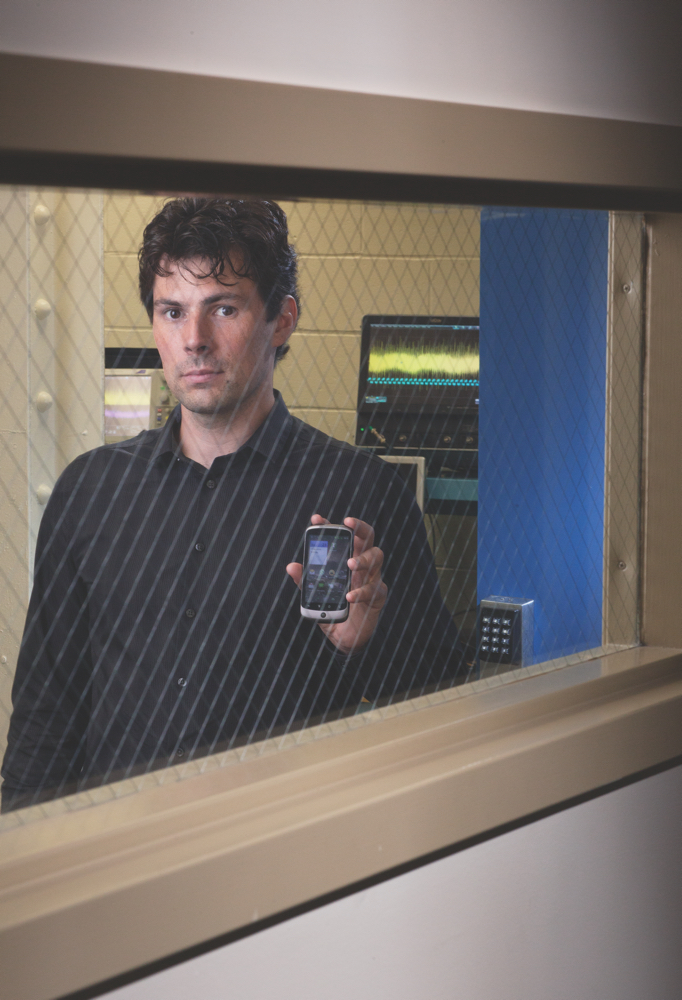 In a forthcoming paper, Eisenbarth and his collaborators investigate key evolving cryptosystems: algorithms whose private keys change over time, making them more resilient to attack. Such systems have existed in theory for some time, but the trick is to implement them so that they will work in small, low-power devices. And researchers don’t yet know what would be less costly, and therefore more viable: equipping the old algorithms with fresh countermeasures, or replacing those algorithms altogether with new and improved ones.

“It’s always a trade-off between cost and security,” says Eisenbarth, who explains that cryptographic enhancements can increase CPU usage, power consumption, and even chip size.

That may be so. But the need for better, cheaper, and less burdensome security measures will only increase. And Eisenbarth and his colleagues in the Cybersecurity Program will continue to help find them, using all the means at their disposal.

This article originally appeared in the 2013 edition of WPI Research.