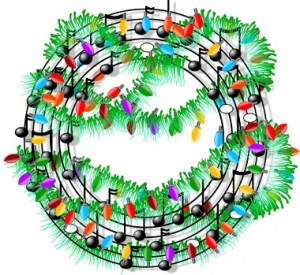 • When the WPI Concert Band stages its annual Brown Bag Lunch Concert on December 11 in Alden Memorial, the campus community will have an opportunity to feed themselves―and others―while getting into the spirit with festive holiday music.

That’s because audience members are encouraged to bring both their own lunch and a nonperishable food item, which will be donated to the Worcester County Food Bank. The program is scheduled to run from noon to 12:50 p.m.

According to Douglas Weeks, associate head of the Department of Humanities and Arts and director of the WPI Concert Band, the performance will consist of seasonal music such as Sleigh Ride and Celtic Carol, and will include Chanukah selections, all chosen with the audience and players in mind.

“It will be a light, cheery concert,” he says. “There will be a variety of styles; it’s a good opportunity to take a break and enjoy some holiday music.” Tables and chairs will be set up in something of a cabaret style for the audience’s dining and listening pleasure.

The program will be co-conducted by Samantha McGill, assistant director of the Concert Band and a 2009 graduate, who came up with the idea for the Brown Bag Lunch Concert, Weeks explains.

“I credit Sam. We were looking for a new idea for a concert we could perform on campus, and she hit on the idea of a lunchtime concert that could also collect donations for the food bank.”

The Concert Band, which is made up of 90 students and averages five concerts a year, has an impressive history, says Weeks, who also directs the WPI Orchestra and the WPI Brass Ensemble.

“Instrumental music has always been a staple of WPI life. I have directed this band now for about 30 years. The band, over the years, has presented many programs on campus and our several tours in Hungary, Romania, the Czech Republic, Italy, Luxembourg, Ireland, Spain, Belgium, Russia, England, Poland, Germany, France, Egypt, Greece, Canada, and of course, the U.S.”

The band can be a springboard to future musical endeavors, he adds. A great many Concert Band musicians continue to play as an avocation, while a limited number pursue full-time careers in music. Much like McGill, many continue on a part-time basis.

Weeks says that previous concerts have been successful in providing both entertainment and an opportunity to give back to the community. The Worcester County Food Bank was chosen, he explains, simply because “it seemed an appropriate charity at this time of year, and most people buy into the spirit of it.”

Jean McMurray, executive director of the food bank, certainly agrees and says that dropping off a food item is an excellent way to help out.

“Asking people to donate a food item to gain admission is popular and it’s successful if it’s well advertised,” she notes. “It’s also common for events to be flexible and accept financial donations, as well. People don’t always know about the food item donation as the cost of admission or they forget to bring it with them.”