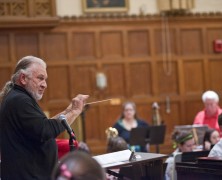 WPI’s singers and instrumentalists will lead us into the holiday season with two December concerts, providing a cheerful interlude in the midst of exams and projects.

On Dec. 3 at 7:30 p.m. in Alden Hall, the WPI Orchestra and the Festival Chorus will present the annual Holiday Concert.

Next week, on Wednesday, Dec. 9, at noon, members of the community may bring their lunches and join the Concert Band in Alden for a Brown Bag Concert of holiday favorites.

This week’s concert opens with the orchestra’s performance of Ralph Vaughan Williams’s Fantasia on Greensleeves (What Child Is This), highlighting senior flutists Kayleigh Sullivan and Julia Truong. 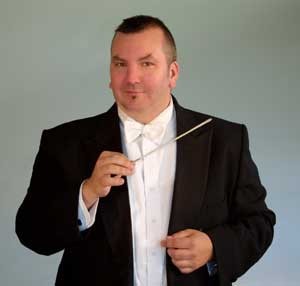 The first half of the concert will conclude with Bizet’s popular L’Arlesienne Suite No. 1, the first movement based on the Christmas carol March of the Kings.

The WPI Festival Chorus, directed by John Delorey, will then join the orchestra to preview selections from the chorus’s upcoming Holiday Pops concert at Mechanics Hall on Dec. 12 with the Massachusetts Symphony Orchestra. The two featured selections will be the striking South African anthem Bawo Thixo Somandla, as well as John Williams’s joyful Exultate Justi from the film Empire of the Sun.

“We always end the concert with a Holiday Sing-along and then our annual Hallelujah Chorus from Handel’s Messiah,” says Delorey.  “It’s a great way to get into the holiday spirit.”

The sing-along piece this year will be Leroy Anderson’s A Christmas Festival.

This year marks the fifth for the now annual concert, where the focus is on light and fun holiday music. Selections will include Celtic Carol, Alfred Reed’s Russian Christmas Music, and The Chanukah Song by Adam Sandler.

As they have in years past, first graders from the Worcester Public Schools will attend the concert.

Both concerts are free and open to the public. However, the Concert Band asks that members of the audience bring a non-perishable food item to the Brown Bag Concert; the band will donate all food contributions to the Worcester County Food Bank.