Say the words “math class” and you’re likely to picture rows of desks with somber students hunched over endless worksheets—the only things moving are the points of their pencils.

Two professors in WPI’s Learning Sciences and Technologies Program seek to shake up that paradigm by tapping into the learning power of children’s natural inclination to move and play. Although the two have taken different approaches in their design of game-based classroom technology, the underlying principles, and the questions they seek to answer about learning and thinking, spring from a similar place.

What does it mean to be “good at math?” And what can teachers do to get more students interested and engaged in a subject many find intimidating? Erin Ottmar, PhD, is intrigued by questions like these. The key to finding answers, she says, is to worry less about whether students can correctly answer a bunch of math problems and to focus more on the process they use to attack them. In her research, she seeks a deeper understanding of the strengths (or weaknesses) of a student’s comprehension of mathematical concepts. She starts by comparing the strategies and approaches employed by math “experts” (including some WPI undergraduates) and “novices” (who tend to struggle with math problems).

She’s noticed that the experts tend to be especially good at visualizing and identifying mathematical patterns. They seem to literally see chunks of expressions floating before them with components that can be manipulated in space. “When they talk and think about mathematics, they tend to gesture and move,” Ottmar says. “When asked how they solved an algebra equation, they’ll say, ‘Oh, I took this 4 and I moved it over there,’” she says, swooping a finger from right to left. “They often use verbs like combine, split, and move to describe what they’re doing — and they’ll actually make a corresponding motion.”

From Here to There and Graspable Math in Action

Believing that this way of envisioning and doing math can aid learning, she collaborated with colleagues at Indiana University to develop several touch-based technology tools that let students manipulate the elements of an algebraic equation on a screen until they arrive at a specified goal or solution. The programs don’t just teach math or record who got the correct answer—they capture the steps each student takes to arrive at an answer, so the data can be aggregated and analyzed. This rich information can be used to better help teachers help students. It also gives scientists a glimpse inside the minds of learners as they grapple with mathematical concepts. Ottmar says her research produces tools for teaching, learning, and assessment; they, in turn, generate data that feeds back into her research.

One tool she’s developed is a puzzle-based iPad app called From Here to There (FH2T), which lets students move, swipe, and transform numerals and mathematical expressions, manipulating these elements until they reach a set goal. Instead of waiting days for a grade, they get immediate feedback about errors, process, and strategy, and they can keep trying until they arrive at the solution. The program (free in the iTunes store) has been tested in middle school classrooms, where it’s been shown to improve learning and engagement. Ottmar will conduct further tests of the app’s effectiveness in preparation for a larger-scale implementation.

The concept behind From Here to There has evolved into a more advanced program called Graspable Math (GM). With functions similar to those of FH2T, Graspable Math gives students and teachers an open “canvas” onto which they can apply their own problems. GM, free on the Web (www.graspablemath.com), works with any standard computer operating system — an advantage for schools not equipped with iPads.

Ottmar says math games and technology don’t need flashy graphics or superhero sagas to capture kids’ interest. When designed right, mathematical tasks can be fun and engaging in their own right. Her puzzle-based goal approach relies on the intrinsic challenge of complex strategy games such as chess and checkers, which excite minds with risk-taking opportunities, open-ended options, and consequences.

Some educators and parents may think of educational games as “sugar coating,” and insist on the rigor of more traditional pencil-and-paper, “show your work” approaches. But Ottmar and her Indiana colleagues David Landy and Erik Weitnauer believe the development of Graspable Math has led to a “better paper,” which captures the power of learning through onscreen manipulation. With its flexibility, their better paper also lets kids discover there is often more than one way to approach and solve a math problem. What’s more, by tapping into different ways of thinking and being creative, the technology may boost confidence and short-circuit the anxiety that too often turns kids off to math at a young age.

Math on Your Wrist

Ivon Arroyo, PhD, also works with the concept of embodiment and learning, transforming traditional children’s games with Wi-Fi connected “wearables” that offer learning challenges and feedback. Her games teach the basics of number sense, measurement estimation, and geometry while letting children run and play in open spaces as they search for objects that match specified mathematical parameters.

In her early work, Arroyo developed e-Textiles—for example, hoodies with attached sensors and LED displays on the sleeves. Children wore them to play a version of hide-and-seek, as they were challenged by constraints such as “Hide behind an object that has a volume of greater than 50 cubic feet.” Some practical problems emerged in testing—the sweatshirts were bulky and unattractive, the wiring was fragile, and teachers wanted to know, “Who’s going to wash these shirts?” Arroyo has advanced the concept with sleeker “learning assistants,” such as smart watches and cell phones anchored to arms with sports holsters. 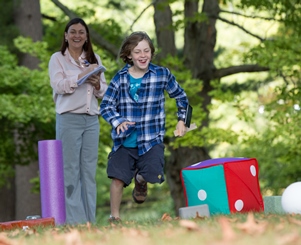 Ivon Arroyo watches as her son, Nicolás Arroyo
Lisle, tries out the game “Estimate It!” using
clues on the smartphone on his wrist.

The theory of embodied cognition links thinking skills with social, sensory, and motor functions. “It is believed that motor action is encoded within the brain—not just abstract ideas,” Arroyo says. She adds that this is not new—especially at the elementary school level, teachers are already intuitively incorporating touch and motion in learning activities by using hands-on activities that involve the manipulation of concrete objects in the classroom. Her aim is to understand the connections between embodied hands-on activities and learning in a scientific manner, deciphering what are important components of motor action that may be conducive to learning while leveraging the power of lightweight, mobile technology in games that combine learning and fun.

Arroyo’s undergraduate students (working on IQPs and MQPs) have created a new software and hardware infrastructure that supports embodied games. The “Wearable Game Engine” is a Web-based platform that allows teachers and students to play games outside or inside with one mobile device per student, provided there’s a Wi-Fi or cellular connection available. Arroyo’s graduate students have created games that make use of these wearables, such as “Tangrams Race”—a relay race that has students running to fetch puzzle pieces that match specified geocentric constraints, then working as a team to assemble them to fit an intricate pattern (Yuting Liu, MS candidate, IMGD). “Estimate It!” sends students outside to seek objects that fit the specified criteria, equipped with only crude measuring tools, such as a 12-inch dowel (Leigh Rountree, MS candidate, IMGD).

Students can press colored buttons on their watches for cues and hints; they also use the buttons to input sequences of colored dots that appear on target objects, thus indicating they’ve found the correct object. They can also scan the objects using the NFC (near field communication) capability available in cell phones and smartwatches.

Beyond the empirical results Arroyo gathers is thejoy captured in her videos of children engaged in these educational games. She also uses video as a tool in re-cap discussions that can inspire children to review their actions as a group, and reflect on the choices they made during play.

Creating math games requires a process of very deep thinking about what mathematics really is.

Arroyo and Ottmar are joining forces to work on an NSF-sponsored research project that merges computational thinking, mathematics education, and embodied technology. They’ll take the game concept to the next level by having game players become game developers through an authoring tool in the online platform. First, teachers—then, students—will use it to play and modify existing games to get familiar with the concepts. They will move on to creating their own games, specifying the behavior of watches at a high level of detail for each moment of the game.

“Creating math games requires a process of very deep thinking about what mathematics really is,” Arroyo says. “I’ve always been an advocate of problem posing, instead of mere problem solving. We want students to explore the flexibility and limits of mathematics, to ask themselves where else and in what other contexts and situations these math concepts apply.”

Says Ottmar, “There’s a lot of math in the world around us. If we get kids engaged by asking them to do mathematical things, there’s clearly a value to that. It’s unchartered territory — a whole new world in defining what it means to be successful in math.”