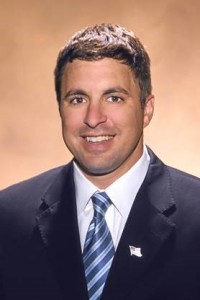 State Rep. Matt Beaton, R-Shrewsbury,
named as new Secretary of Energy
and Environmental Affairs, will be the
closing speaker at the Great Problems
Seminar poster presentation.

Beaton, who has served Worcester’s 11th District since 2011, is about to assume a brand new role: he has been named Governor-elect Charlie Baker’s Secretary of Energy and Environmental Affairs.

It’s a fitting position for the lifelong resident of Shrewsbury, an environmental engineer who founded his own energy efficiency consulting company, Beaton Kane, after graduating from WPI with a degree in biotechnology and from Boston University with a master’s degree in energy and environmental analysis.

In the State House, among other committee assignments, Beaton, a devoted conservationist and outdoorsman, has served on the Joint Committee on Environment, Natural Resources, and Agriculture Committee.

As Secretary of Energy and Environmental Affairs, he will be committed to addressing what he believes to be the central energy-related issue facing Massachusetts: the need to balance the state’s continued leadership in energy efficiency through clean energy installations with affordability for the individual consumer.

That means continuing to reduce greenhouse gas emissions by bringing in natural gas sources and developing wind and solar energy within the state while at the same time keeping prices reasonable.

“Finding the right key to that balance early on will be the main focus of my tenure,” Beaton says.

This morning, the GPS Poster Presentation event will draw 275 students, 75 judges, and “who knows how many visitors,” says Kris Wobbe, associate dean of undergraduate studies, who heads the GPS program.

At the event, first year students will have an opportunity to showcase the team projects they have been working on since the beginning of the academic year.

“It’s an amazing first thing to do [in college],” says Wobbe. “In a lot of classes, students are working hard to take in information, and their work is only seen by them and the professor. Here, it can be seen by the entire community. It’s all the more meaningful for them and can motivate them to kick it up a notch.”

Beaton’s role will be to give them encouragement as well as a reality check.

“We always like to bring in someone from the outside so he or she can see what the students have been doing and let them know how important that work is,” says Wobbe.

At the same time, the students, at 18 or 19 years old, are “very idealistic. They don’t yet understand how these issues can be navigated in the complex political and social reality.”

A real-world perspective can give them “feedback about their projects and let them know why or why not [they might] be feasible in the real world.”

For example, two of her own project teams, who have been taking her seminar on Food Sustainability, are especially excited to meet Rep. Beaton.

Each team’s research has policy potential, one at the city level and one at the state level; the second group is developing legislation to take grocery stores into food deserts, legislation that has already been passed and enacted in other states.

“It’s always possible that something the students have come up with has legs,” says Wobbe. “And how empowering for the students to have a project they worked on as college freshmen to be validated as something that has potential.”

Beaton plans to tell them just how important he believes his WPI education has been to the development of his own career.

“The courses I was able to take helped me shape a career path,” he says. “The project-based learning environment was excellent, and the particular projects I chose gave me a lot of relevant experience.” 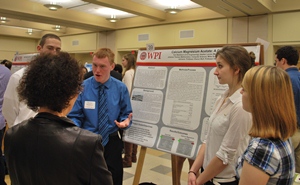 More broadly, however, he gained a strong work ethic and learned how to think critically, “valuable lessons at an early age that stuck with me and that I still use today.”

He will, of course, discuss his own career and his new position, though from the “20,000-foot view.”

But the advice he plans to give them is simple and direct:

“Don’t get discouraged. Work hard. Show up: don’t sit around waiting for opportunities to come to you—go after it.”

And he adds: “Be honest and a good person along the way.”

The GPS Poster Presentation will take place today from 10 a.m. to noon in the Odeum in the Rubin Campus Center.