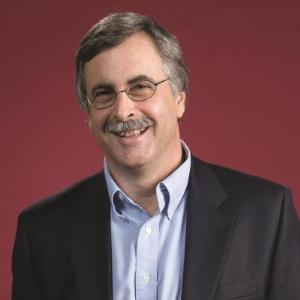 Rich, who was also affiliated with the university’s Interactive Media and Game Development, Learning Sciences and Technologies, and Robotics Engineering programs, joined the WPI faculty in 2007 having already earned widespread recognition for his work in artificial intelligence, software engineering, and human-computer interaction, particularly as a principal research scientist at MIT and a founding member and distinguished scientist at the Mitsubishi Electronic Research Laboratories (MERL).

“At WPI Chuck not only built upon his many professional accomplishments to continue impactful research,” said Craig Wills, professor and head of the Department of Computer Science, “but he had a tremendously positive influence on the students and faculty within Computer Science and IMGD as a teacher, mentor, and colleague.”

In his work with computers and robots, Rich pursued the goal of improving our interactions with technology of all kinds by making them more intuitive, natural, and productive. Motivated in part by images in science fiction of intelligent assistants and companions that could simplify and enrich our lives, he hoped to enhance our experiences with everything from robot helpers to online learning programs.

“If human-like robots are ever going to move freely among us in a broad range of situations (assisting the handicapped and elderly, conducting search-and-rescue operations, or playing roles in sales and entertainment),” he wrote in a research highlight for the National Science Foundation (NSF) website, “we will need to do more than make them safer; we will need to understand how to program them to collaborate with us smoothly and naturally.”

After earning a BASc in engineering science at the University of Toronto and an SM and a PhD in electrical engineering and computer science at MIT, Rich joined the MIT Artificial Intelligence Laboratory as a research scientist in 1980. At MIT, he founded and directed the Programmer’s Apprentice project, which aimed to develop a theory of “how expert programmers analyze, synthesize, modify, explain, specify, verify, and document programs,” according to a research overview he co-authored in 1993. “This research goal overlaps both artificial intelligence and software engineering.”

In 1991, Rich joined the staff of MERL, the North American subsidiary of the corporate research and development organization of Mitsubishi Electric Corporation. Located in Cambridge, MERL conducted research in a wide range of fields within electronics and information technology. Rich and his wife, Candace Sidner, a research professor in computer science at WPI, worked in the area of collaborative agents. Their aim was to develop intelligent agents that could provide a unified conversational interface for all the appliances in a home.

As part of that project, Rich and Sidner created a software platform called COLLAGEN, an application-independent collaboration manager. The platform, which has had an important influence on subsequent work in dialogue processing, was used to develop a number of collaborative agents, including DiamondHelp, a finalist in two design competitions in 2005.

In a 1998 paper in the journal User Modeling and User-Adapter Interaction, Rich and Sidner talked about the principles that guided the development of COLLAGEN. “Our most fundamental underlying assumption is that a human-computer interface based on familiar human discourse rules and conventions will be easier for people to learn and use than one that is not,” they wrote. “Although we cannot yet confirm this assumption by our own empirical studies, we are encouraged by an analogy with the direct-manipulation paradigm for graphical user interfaces, whose success we believe is due, in large part, to users’ familiarity with the rules and conventions of object manipulation in everyday life.” 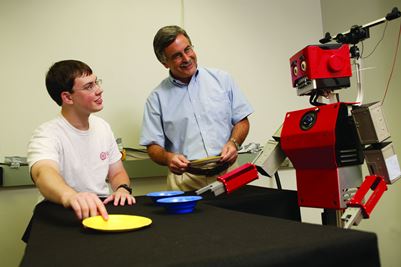 Rich and computer science major Aaron Holroyd chat
with Melvin in this 2008 photo.

At WPI, Rich continued to explore his interest in collaborative and conversational agents. In a 2008 essay in WPI’s research magazine, he described an NSF-funded project in which he explored techniques for helping robots work more effectively with humans by emulating human verbal and nonverbal communications. The research made use of a humanoid robot named Melvin, which Rich helped design while at MERL. With a moveable head and arms and an expressive face, Melvin became a platform for a wide range of research and undergraduate projects at WPI on human-robot collaboration.

In “Robots and Avatars as Hosts, Advisors, Companions, and Jesters,” a 2009 article in AI Magazine, Rich and Sidner surveyed the state of research on the use of AI to create intelligent human companions, focusing, in the conclusion, on one promising application. “Obviously, as robots become able to use their hands and arms safely in close proximity to humans, many physically assistive applications, such as helping the elderly, will become feasible. Furthermore, as compared to the partially competing approach of ubiquitous computing, in which the entire environment is instrumented and automated, a humanoid robot can also offer companionship (emotion and social relationship). Evidence already suggests that people respond positively to such robots.”

With funding from the NSF, Rich and Sidner set out to fulfil that promise by building virtual agents that can serve as companions for the elderly in their homes. These “always on” agents were designed to be available around the clock to provide support and friendship while also promoting healthy behaviors. One agent, named Karen, evolved from a graphical interface on a computer screen to a small robot. It was designed to learn from its interactions with its human companion and anticipate his or her needs “Karen is much more than a simple stimulus-response system,” Rich said. “She has long-term goals for the relationship and a memory of past activities, and she can plan for the future.”

A senior member of the Institute of Electrical and Electronics Engineers (IEEE), Rich was honored for his early work in artificial intelligence by being elected a fellow of the Association for the Advancement of Artificial Intelligence in 1992.

In addition to his prolific accomplishments as a researcher, Rich was known as an excellent classroom instructor who pioneered a number of new courses at WPI, including “Artificial Intelligence for Interactive Media and Games” and “Serious Games.” He was also a valued mentor who supervised or advised more than 30 graduate students at WPI and MIT and served as a faculty advisor for more than a dozen undergraduate Major Qualifying Projects.

Michael Gennert, professor of computer science and former director of the Robotics Engineering Program, says he will remember Rich for his “exuberant personality and playful attitude, which had a wonderful effect on everyone he met. He also had keen insight and boundless curiosity. You could always count on Chuck to ask a profound question at any CS colloquium, whether it was in his research area or not.”

In his profile on the WPI website, Rich offered a glimpse of what motivated his research and his on-going quest to develop computers and robots that can work collaboratively and intelligently with people. “What gets me out of bed in the morning,” he wrote, “is the hope that I will one day interact with a true artificial intelligence and the belief that part of what I will do today contributes to that goal.”

Funeral services will be held on Monday, Jan. 8, at 10 a.m. at the Wilson Chapel at the Andover Newton Theological School, 234 Herrick Road, Newton, MA 02459. In lieu of flowers, donations may be made to the Dana Farber Cancer Institute in Boston.