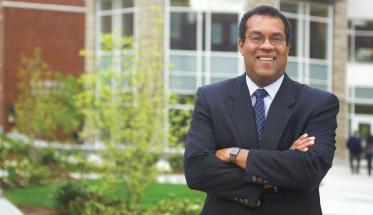 Leonard E. Redon, an emeritus trustee who capped a distinguished business career with public service in his native Rochester, N.Y., died in Florida on May 9 after a battle with cancer. He was 65. His death was announced by the mayor of Rochester, where Redon had served as deputy mayor until stepping down from that post a year ago.

Redon entered public service in 2011 after retiring from Paychex Inc., the largest provider of payroll, human resources, and benefits outsourcing solutions in the United States. He joined the company in 2011 as area vice president and rose to the position of vice president for western operations.

Redon began his career at Eastman Kodak in Rochester as a photographic product development engineer. During a 28-year career at the legendary maker of photography and imaging products, he served as president of Kodak subsidiary Qualex, president of the Customer Equipment Service Division, general manager and vice president for government and education markets, general manager and vice president of market development for the United States and Canada, and Kodak regional vice president in the Midwest. He told the WPI Journal in 1991 that he was the first non-white employee to serve as assistant to Kodak’s chairman and president.

After retiring from Paychex, where he had been responsible for $600 million in operations and led a staff of 2,500, he told a local reporter that one of the most important items on his “bucket list” was “to be involved in something significant.” Not long after that, Thomas Richards, then mayor of Rochester, selected Redon as his deputy.

“Leonard Redon joining our team as deputy mayor is an outstanding addition to my administration, as he brings with him impressive credentials as a manager as well as a long record of community service,” Richards said in announcing the appointment. “We found the right person for this job. Len Redon has a history of success and operational excellence.”

As deputy mayor, Redon was in charge of day-to-day operations in the city of 210,000, with oversight of nearly every city department, the Rochester Democrat and Chronicle reported. He dealt with a range of sensitive issues, including parking and employee discipline, and led an effort to save the city money by switching to self-insurance for employee health insurance.

When Lovely Warren was elected mayor in 2014, Redon was one of a small number of senior staff members she kept on. She described him as “an extremely intelligent and charismatic leader” in remarks on Tuesday. City Council President Loretta Scott called him “a dynamic leader.” “But even more important,” she added, “he will be fondly remembered as a deputy mayor who was thoughtful, who was smart, and who was approachable and accessible to everyone in the building.”

Redon earned a BS in chemical engineering at WPI with the aid of financial aid, and he told the WPI Journal that he credited that support and his WPI education with much of his career success. “When I look back on my life and note the key events that have helped me achieve my goals, it is clear that the education I received from WPI is a seed from which much has grown. Without financial aid from WPI, an education of that caliber would probably not have been available to me.”

As a student at WPI, Redon was a member of Lambda Chi Alpha fraternity and Omega Chi Epsilon, the chemical engineering honor society. He was also elected to Skull, the senior honorary society. He was active in the Masque theatre group; WICN, the intercollegiate radio station; Newspeak, the student newspaper; cheerleading; and the Camera Club. His interest in the arts (he was an accomplished guitarist and singer who performed with the BureauCats, a band made up of Rochester city employees) led him to join WPI’s Arts and Sciences Advisory Board.

An active alumnus, he was a class agent and a class solicitor, assisted the Admissions Office with student recruitment, and hosted alumni events in the Rochester area. He was elected to the WPI Board of Trustees in 1992 and served for 18 years, including two years as vice chairman. He was elected a trustee emeritus in 2010. As a trustee, he made contributions as a member of the board’s Academic Planning, Budget and Finance, Facilities, Student Affairs, and Executive committees, and enjoyed being a member of the Trustee Mentor Program, which pairs trustees with current students to share personal and professional experiences. WPI honored his service to the Institute by presenting him with the Herbert F. Taylor Alumni Award for Distinguished Service in 2013.

Over the years, Redon was involved with a number of organizations, including the East-West Corporate Corridor Association, the National Action Council for Minorities in Engineering, the United Negro College Fund, and Boy Scouts of America. In Rochester, he served on a number of boards, including those of the Finger Lakes Health System Agency, the George Eastman House and Museum of Photography and Film, and the Monroe Community College Foundation.

He is survived by his wife and their children, Jason and Jennifer. Details of services are pending.

DEPARTMENT(S)
Office of the President