WPI President Leshin delivers her charge to the graduates

President Laurie A. Leshin and Board of Trustees Chairman Jack T. Mollen presided over the ceremony, which included the awarding of an honorary doctor of science degree to Audrey Carlan ’57, who received the first graduate degree awarded by WPI to a woman—15 years before the first female undergraduates were awarded degrees.

The keynote address was given by Deborah Wince-Smith, president and CEO of the U.S. Council on Competitiveness, which consists of university presidents, chief executive officers, labor leaders, and national lab directors working together to shape policies and programs to jump-start productivity and grow America’s economy. Wince-Smith, a key leader in recharging the national debate on competitiveness, innovation, and resilience, also received an honorary doctor of humane letters degree.

In her remarks, Wince-Smith provided a “mini-lecture on the history of Worcester” and its “contributions to building the prosperity of America,” saying that her training as an anthropologist at Vassar College and as a classical archaeologist at King’s College, Cambridge University, allowed her to develop particular insight into human civilization. What she has learned, she said, “is that the creation, mastery, and use of new knowledge and technology have always been drivers, shapers, and determinants of which cultures, societies, and economies flourished, gained geopolitical power, and changed the course of history.”

Throughout Worcester’s history, she noted, new knowledge and technology have sparked, among many other things, inventions such as the monkey wrench, the envelope-folding machine, and the steam calliope. It has also led to the birth of the modern wire industry and the city’s role—as home to the largest producer of barbed wire—in the settlement of the American West. Wince-Smith also spoke of early technological innovations by local companies that led the nation in the production of ice skates, recessed-head screws, women’s hats, and valentines.

Likening the WPI students assembled to the “innovative, hopeful, future-oriented entrepreneurs and industrialists” of Worcester’s past, Wince-Smith urged the graduates to use their skills and the “game-changing technologies” in fields such as data science, genetics, biotechnology, and computer science to change the world for the better. “Bestowed with the power of knowledge, you must now embrace the hard work every generation must undertake to improve the human condition.” 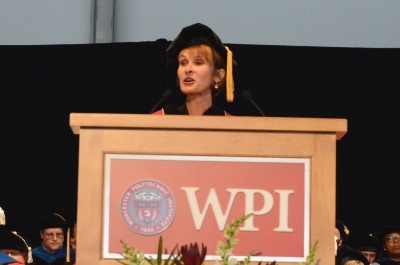 President Leshin reflected on the “pure joy of discovery” in science that comes after long hours—and years—of dogged effort. She recounted her own postdoctoral work—into understanding the environment on Mars, using microscopic chemical measurements on rare meteorites—and the “moment of truth” in which she was able to prove her theory, after more than a year of painstaking, complex, time-consuming work.

“And I remember appreciating it at the time: the idea of breaking new ground. Of having an impact on a field of study,” she said. “Today, as I look out at all of you, I am struck most by the amazing potential for breaking new ground that I see here in front of me.”

Graduate class speaker Rodica Neamtu, who received her PhD in computer science, is a data mining researcher. Neamtu congratulated her fellow graduates for their hard work, often against the odds, in earning their degrees. “Like many of you, I returned to school later in life because I had to turn hardships into positive experiences. Like many of you, I was born in a different country and I had to learn a new way of life and adjust to a new educational system.” Neamtu earned her undergraduate and master’s degrees in Romania and, several years ago, lost a job she had held for 14 years as a lecturer at another school when her academic department dissolved. The upheaval led her to pursue a doctoral degree at WPI. But, she said to her fellow graduate students, “like all of you, I kept moving on, finding alternatives, asking for help, working hard, and learning to turn setbacks into progress.” After graduation, Neamtu will join WPI’s computer science faculty as a teaching associate professor.

Audrey Carlan, who received an honorary doctorate in
science, shows off a punch card like the ones she used to
program an IBM 650 computer while completing research
for her 1957 master of science in physics at WPI.

After being presented an honorary doctor of science degree, Carlan recalled her work at WPI and her continuing love of science. Being the first woman in WPI’s graduate program had its challenges but, she said, “The professors didn’t care if I was not a male student.” Her thesis focused on the new computer programming language, FORTRAN. Carlan did not attend her commencement ceremonies in 1957, as she was more than eight months pregnant with her first child.

Carlan and her late husband, Alan, who also completed his graduate work at WPI, were both employed at American Optical in Southbridge, before moving to California. At AO, she worked on the earliest continuous vision lenses (now known as progressive lenses), among other products. Although her master’s degree opened the door to jobs that were not commonly held by women at the time, Carlan eventually moved into teaching and is professor emeritus of mathematics at Southwest Community College in Los Angeles; she also authored Everyday Mathematics for the Numerically Challenged.

Since 2016, WPI has held two distinct exercises in the spring to celebrate the accomplishments of its undergraduate and graduate students, owing in part to the growth of its programs, particularly its graduate programs. This year WPI awarded a total of 747 master’s degrees and 47 PhDs, a record for the university. More than 1,000 students received bachelor’s degrees this academic year.

Undergraduate commencement exercises will be held on Saturday, May 13, at 10 a.m., at which the keynote will be delivered by Rodney Brooks, chairman and chief technology officer of Rethink Robotics. Brooks and Donald Peterson ’71, a longtime member and former chairman of the university’s board of trustees, will receive honorary degrees. In 2007 Peterson, who had a distinguished career in the telecommunications industry, including serving as the CFO of Lucent and the first CEO of Avaya, established the Chairman’s Exemplary Faculty Prize, which will be presented during the undergraduate ceremony.