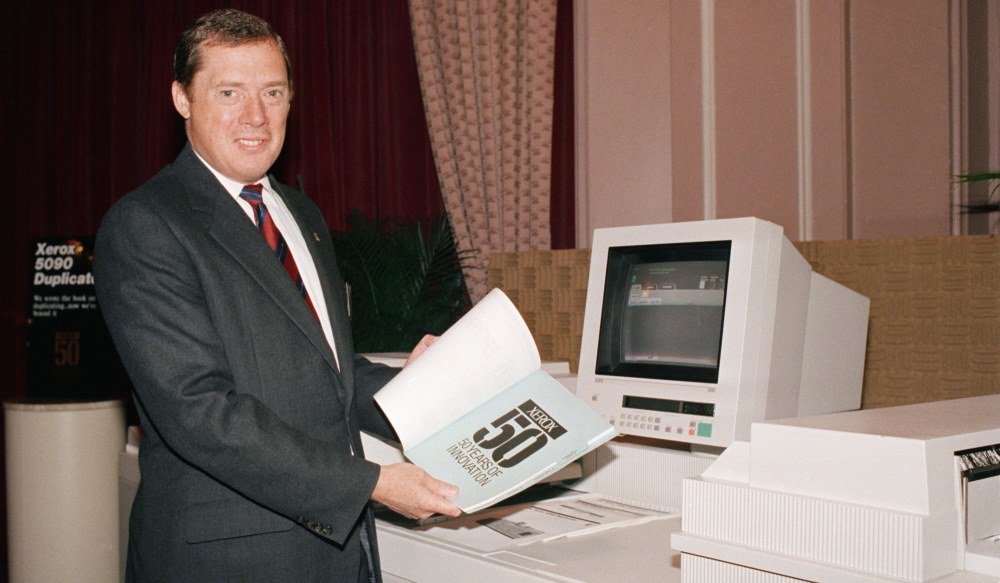 As Xerox president in 1988, Paul Allaire ‘60 helps unveil the new Xerox 5090 duplicator, for in-house and commercial printers. The 50 series, named to celebrate the 50th anniversary of xerography, was hailed by industry watchers

In Memoriam: Paul A. Allaire ’60, Former Chairman of Xerox Corporation and WPI Trustee

Known for his efforts to level the playing field for women in business and to attract more young people into STEM fields, he helped revitalize Xerox and lead it through a major transformation

Paul A. Allaire ‘60, an electrical engineer who ascended to the top of one of the nation’s most iconic technology companies, passed away on Feb. 24 after a long illness. He was 80.

The son of a self-employed contractor and part-time farmer, Allaire grew up on the family farm in nearby Auburn, Mass. He earned a BS in electrical engineering at WPI, where he was elected to Tau Beta Pi, the national engineering honor society. After graduation he went to work for Univac as a memory development engineer and then moved on to General Electric as a systems engineer.

In these early positions he discovered his interest in management and decided to go back to school at Carnegie Mellon University, where he earned a master's degree in industrial administration. Shortly after, he joined Xerox in Stamford, Conn., as a financial analyst. He quickly rose through the ranks, becoming director of financial planning and control for Rank Xerox in England in 1970, director of international finance in 1973, staff officer and executive director for Rank Xerox in London in 1975, and managing director in 1980. 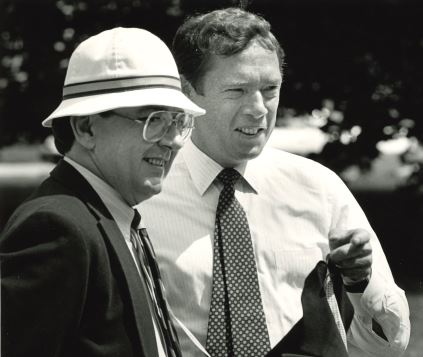 Allaire, right, chats with an unidentified alumnus during the Class of 1960's 25th Reunion in 1985

In July 1983, he was named senior vice president and chief staff officer; he assumed the presidency of Xerox three years later. In the 1980s Xerox, which had invented the photocopy industry when it launched its first plain-paper copier in 1959, was facing intense competition from low-cost copiers made by Japanese manufacturers. Allaire sensed that the company, lulled by years of spectacular growth, had lost its competitive edge. “There was beginning to be a sickening self-doubt within the company that we were basically living on borrowed time,” he said at the time.

One of his first actions as president was to require employees in the Business Products and Systems Division to understand each aspect of the competition and to use this information to determine how Xerox could do things better. The Xerox 50 Series was the first major new product line developed after this intensive self-study. Introduced in 1988, it was hailed by industry watchers.

In 1989 Allaire’s efforts earned Xerox the federal government's prestigious Malcolm Baldridge National Quality Award for achievement in quality and customer satisfaction. (Under his direction, the company would receive a second Baldridge award in 1997.)

Allaire’s success led to his appointment as CEO in 1990 and chairman a year later. In his new role, he repositioned Xerox as “the document company,” which signified its role as an innovator at the intersection of the world’s paper-based and electronic information. He also led a major reorganization of the company’s document processing business, and extracted the company from its financial services business, which had left it with significant liabilities. “Few CEOs have approached the process of organizational redesign as systematically and methodically as Allaire has,” an article in the Harvard Business Review noted.

Allaire was also proud of his efforts to mentor female executives throughout his career. In fact, the two CEOs who ultimately succeeded him were women. One of them, Anne Mulcahy, noted in Allaire’s official obituary, “Paul’s achievements in business, government, and the nonprofit world will long be remembered. So will his leadership in championing the rights of women and leveling the playing field for women in the world of work.”

Allaire was elected an at-large member of the WPI Board of Trustees in 1987 and served until 2002, when he was named a trustee emeritus. He received the Robert H. Goddard Alumni Award for Outstanding Professional Achievement from the WPI Alumni Association in 1985 and the Hobart Newell Award from the Electrical and Computer Engineering Department in 1992. In 1994 he delivered the address at Commencement and received an honorary doctorate in engineering. 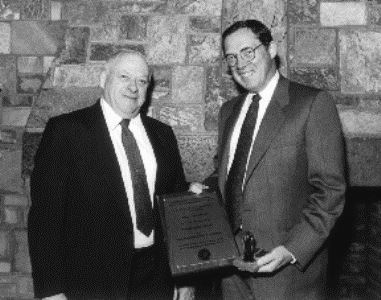 He was a strong supporter of his alma mater throughout his career. "I attribute a lot of my success to what I learned when I was at WPI," he told WPI publication Quest in 2001. Among his contributions to the university was a $1 million addition to the Class of 1960’s 40th Reunion Gift. With part of those funds, he established and endowed the FIRST/WPI Future Engineering Leadership Scholarship Award. Each year, it provides a full-tuition WPI scholarship to a participant in the national FIRST robotics competition who is Native American, African American, Hispanic and/or female. FIRST was founded in 1989 by Dean Kamen ’73, owner and president of DEKA Research & Development Corp. in Manchester, N.H.

Allaire, who was chairman emeritus and a member of the FIRST board of directors at that time, said, "Service and technology are the ingredients that fuel our economic engine. To keep it pumping we desperately need young people to pursue careers in the sciences and engineering. FIRST engages young people while they are in high school, makes science fun and interesting, and opens their minds to the possibilities in these careers."

Allaire was active in many other organizations. He served on a number of federal government commissions and chaired the Council on Competitiveness. He also chaired the Ford Foundation board of directors and served on the boards of the Council on Foreign Relations, the New York City Ballet, the Nature Conservancy Colorado, and Outward Bound. He was an avid skier and cyclist, and also a horseman, a pursuit he continued until his 80th year.

He leaves his wife, Tina, son Brian and daughter Christiana Marran, six grandchildren, and five siblings. The family suggests that memorial contributions may be made to the Nature Conservancy or the Multiple Myeloma Research Foundation.