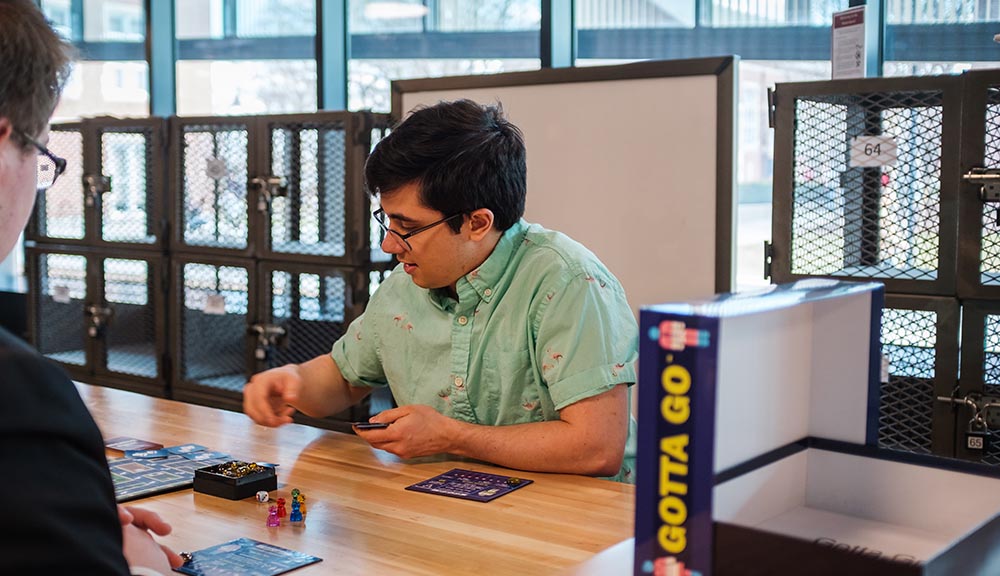 One of the most important memories Leo Bunyea ’19 has of his experience at WPI is working on an IQP (Interactive Qualifying Project) on gender-neutral bathrooms, a project he was introduced to by Quontay Turner ’11, former outreach coordinator for diversity programs.

Having come out as transgender between his freshman and sophomore years, Bunyea was more open to expressing his passions about topics affecting the transgender community—including the legislation in North Carolina aimed at dictating which bathrooms transgender people could use. People were outraged, and Bunyea realized he had a voice

Invigorated from his IQP experience, Bunyea decided to take his activism and awareness work to gaming, and declared a major in Interactive Media & Game Development (IMGD) and minor in Computer Science.

During his sophomore year, Bunyea created a board game where players are characters with different gender identities whose mission is to find a bathroom before their bladders explode.

Aside from kicking up a couple laughs and casting a critical eye on “bathroom bills” like the one in North Carolina, the goal of the game is to highlight what it feels like to be a person racing to find a bathroom they might not be allowed to use because of their gender identity. Or, if the player is allowed to use it, they might experience the feeling of extreme discomfort using a bathroom dedicated to a gender they don’t identify with. 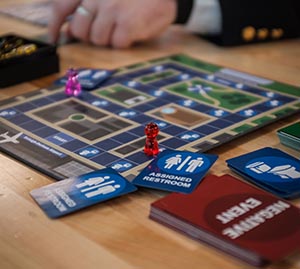 Bunyea said his goal for the game is to show non-transgender people some of the daily hurdles that could be faced by transgender people, that even something as simple as using a public restroom can make a transgender person feel excluded from society. He hopes to provide free access to the game for players who are curious and concerned about the transgender experience.

“I think Gotta Go was an important milestone in my design career,” said the Barnstable, Mass., native. “Eventually, I want to have a free, printable PDF version to make the game as accessible as possible. I don't think I'll ever sell printed copies.”

To cap off his senior year, Bunyea recently presented Gotta Go at the 2019 Southwest Popular and American Culture Association (SWPACA) conference in Albuquerque, N.M. At the conference he was awarded a competitive travel grant for his work and his drive to pursue gaming academia. He plans to return to WPI in the fall to begin a master’s degree program in IMGD, focusing on the serious games track, and to continue building games that depict different aspects of the transgender experience.

“Leo’s journey went from wanting to tell stories that resonated with him … to being a critically reflective human who can represent these experiences in game spaces,” said deWinter, who is also a professor of Humanities and Arts.

She added that in the course of four years, “Leo has already begun asking sophisticated questions that we can only anticipate will drive his future work.”

During his final presentation before graduating, he asked, “Is it possible to know the experiences of others through representation? Can games provide real empathy to a whole lived experience? These are questions that senior scholars and senior game designers are grappling with after years of working in these spaces.”

The Impact is Still Going

Bunyea said he owes the success of his games and his own personal growth to the support of IMGD faculty, who pushed him to submit to the SWPACA conference and consider continuing his education. 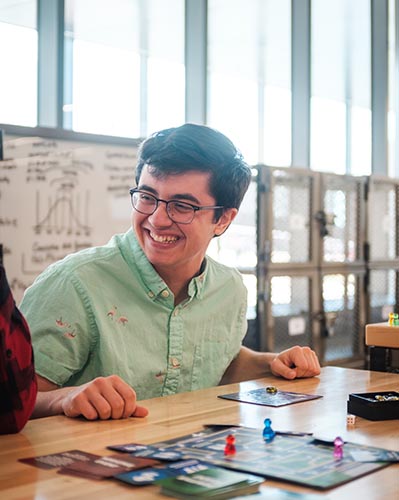 Bunyea will return to WPI in the fall to start a master's degree in IMGD, following the serious games track.

“I didn’t think graduate school was an accessible option,” he said. “I wouldn’t have chosen my career path without Gillian Smith and Jennifer deWinter. The IMGD faculty are some of the most important people in my life.”

IMGD faculty members said the feeling is mutual. Smith, assistant professor of computer science, and Bunyea’s MQP advisor, said he fostered close relationships with faculty and students alike, both personally and through WPI’s project-based learning system. He also challenged his peers to think about the humanness and direction their own research is taking, including hers, she said.

“Leo's goals through his game design work are to bring awareness about trans identity and issues faced in the trans community through game play, and—more broadly—he's interested in how games communicate through mechanics,” said Smith, who already plans to advise Bunyea during graduate school. “In his MQP game Bound, he began with the goal of eliciting in players a similar set of emotions as he has experienced himself, and aimed to subvert a common genre of game in order to do so. His design process is so deeply reflective and, by the end of his project, he left having created a game that both met his original goals and had him questioning what his goals should be in the future.”

Bunyea said one of his biggest takeaways of being a gaming student at WPI is learning how to express himself and how to help the community. If anything can be taken from his story, he hopes that people realize the impact they have on each other’s lives.

“People should realize the amount of positive power they have,” he said. “People are capable of influencing change, and once they realize that, the positive changes they make can only ripple out.”

Kate Olguin ’20, a fellow IMGD major, said it’s been incredible watching her friend branch out of his comfort zone over the last four years. She said that she expects Bunyea to continue to making an impact in the years to come.

“Leo always puts a lot of himself into his work, and that sort of thing can be nerve-wracking to share with the world,” she said. “However, it makes his work stand out and have lots of emotional impact. He's not afraid to take on issues that others haven't touched, because it's what he cares about and what he thinks is right. I admire him a lot for that.”