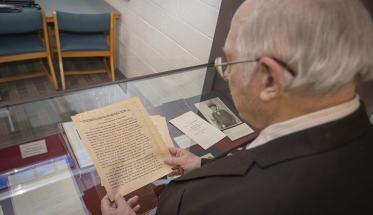 A century ago, Franklin Delano Roosevelt delivered the Commencement address at WPI, and a political future took shape

One hundred years ago this summer, a rising young political star named Franklin Delano Roosevelt strode across the stage at WPI’s then Alumni Gymnasium and delivered the Commencement speech to 44 fresh-faced undergraduates sitting before him.

At the time, the 37-year-old Roosevelt was the assistant secretary of the U.S. Navy, and his speech—titled “The National Emergency of Peace Times”—was made just seven months after the end of World War I.

With the United States still reeling from the devastating effects of the Great War, Roosevelt addressed draft-age men on Wednesday, June 25, 1919, in WPI’s then Memorial Gymnasium with messages about “national service” and commitment to their country, calling the draft law “… the most truly American piece of legislation ever enacted.” 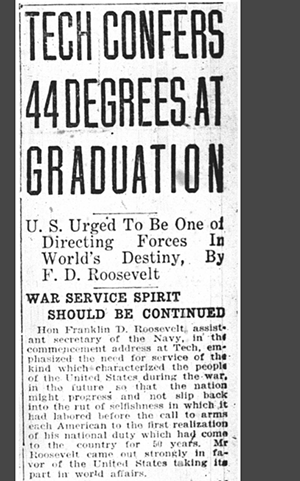 “If I were a graduate in 1919, I suspect that FDR’s reference to national service and national preparedness would make me a bit unsettled,” says James Hanlan, a history professor at WPI for 44 years who has read Roosevelt’s speech. “Americans were beginning to feel that they had been led into the first world war with somewhat less than fully candid publicity by the [Woodrow] Wilson administration.’’

Archival Documents on Display during Commencement

As WPI readies for Commencement exercises this week, the trove of documents in WPI’s Archives between Roosevelt and then WPI President Ira Hollis offer a glimpse into the rapport between the two leaders, the political and social dynamic of that era, and how Roosevelt came to select WPI for his speech.

The archival display—complete with a series of original letters between the two leaders—will be on display this week in the Rubin Campus Center lobby.

“We think these documents, and particularly Roosevelt’s speech, will give the WPI community and other visitors an insiders’ look into his thinking,” says Arthur Carlson, WPI archivist. “We’re fortunate to have these materials in our possession.”

Hanlan and Carlson note that the two men traveled in similar circles. Before becoming WPI president, Hollis spent 15 years on active Navy duty, and both had spent time at Harvard University––Roosevelt as a student from 1900 to 1903 and Hollis as the onetime head of its Engineering Department.

In a letter to Roosevelt dated May 20, 1919, one month before the Commencement address, Hollis noted that the WPI graduating class was significantly reduced due to the war. “Many were drawn off by the war and have not been able to get back to their former status so that they cannot graduate this year,” he wrote.

He added that Roosevelt was free to address any topic, saying ,“I will leave that entirely to you knowing well that your good sense will not let you go astray.”

In a letter to Hollis two days later, Roosevelt confirmed that he would serve as Commencement speaker, saying he was “…looking forward with the greatest of pleasure to being with you all at that time.”

The ensuing letters between the two leaders provide nuggets of mundane logistics about train arrival times and breakfast plans, as well as more strategic discussions about Roosevelt's delivering a speech after Commencement to the combined members of the Rotary Club and the Worcester Chamber of Commerce.

Hanlan, who has just finished teaching a course at WPI called “The Shaping of Post-1920 America,” sees the political animal in Roosevelt emerging at that time.

“He was an ambitious and rising young politician,” says Hanlan. “He was looking for opportunities, and I think his friend Hollis recognized that and thought, ‘In addition to the Commencement speech at WPI, why don’t you address both the Rotary and the Chamber at the same time?’ After all, here was a chance for him to make even more contacts and impress more people.”

In his WPI address, Roosevelt prompted the graduates with practical questions. “What then is the lesson of these two years?” he asked. “Clearly that national service is a success. Is there a continuing emergency? Yes, many of them, ever present, always of import to our success and our security.”

Roosevelt went on to say that he expected men and women alike to continue serving the country in some capacity. “The answer is clear and definite: We do: from all those millions of citizens who have done their bit in this war, from the millions of young men and women who are taking their places in the world year by year, from them the country expects a continuation of service to the day of their death,” Roosevelt told the graduates.

Hanlan also thinks Roosevelt was very strategic in selecting Worcester to make his comments as the industrial city flew under the radar of big national media outlets. He was, in effect, testing his political ideas, namely this idea of national service.

“He was not trying out this controversial idea at Harvard or at Yale or at Princeton because if he was, he’d be in the national newspapers,” says Hanlan. “And if he ends up lighting a keg of dynamite, it would blow up in his face. Roosevelt was a very shrewd politician and Worcester was a little bit out of the way. It’s a smaller city, and he’s gauging how the local business elite respond to his ideas of national service.”

Roosevelt would not become president of the United States until 1933, but Hanlan believes that his Worcester visit helped set the stage for his future political platform. Ultimately, Roosevelt signed the Selective Training and Service Act of 1940, the first peacetime draft in U.S. history.

“This speech would be a way for him to test those waters early in his national career,” says Hanlan. “He did act, as historian James MacGregor Burns said, like a lion and a fox. Here he was being the fox.” 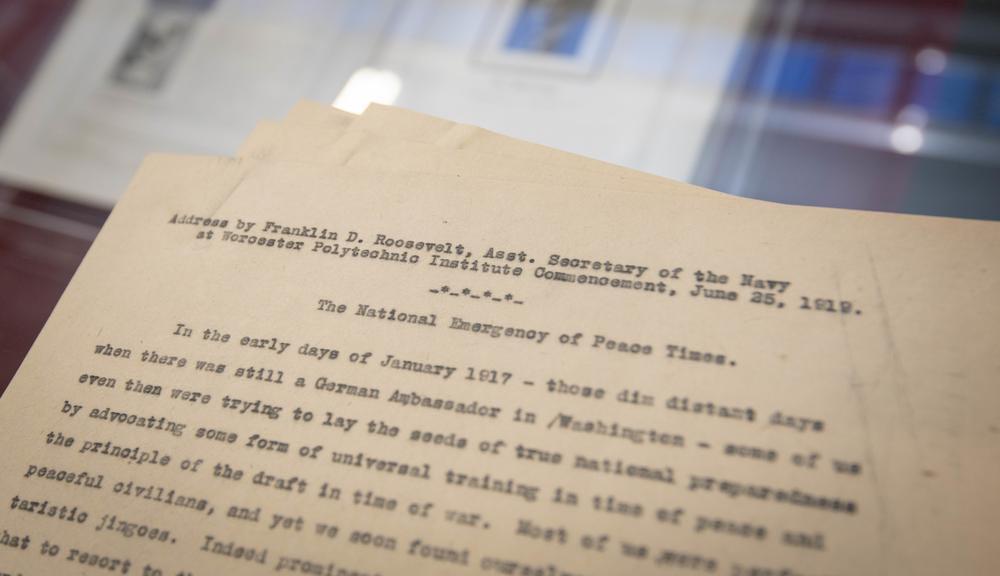 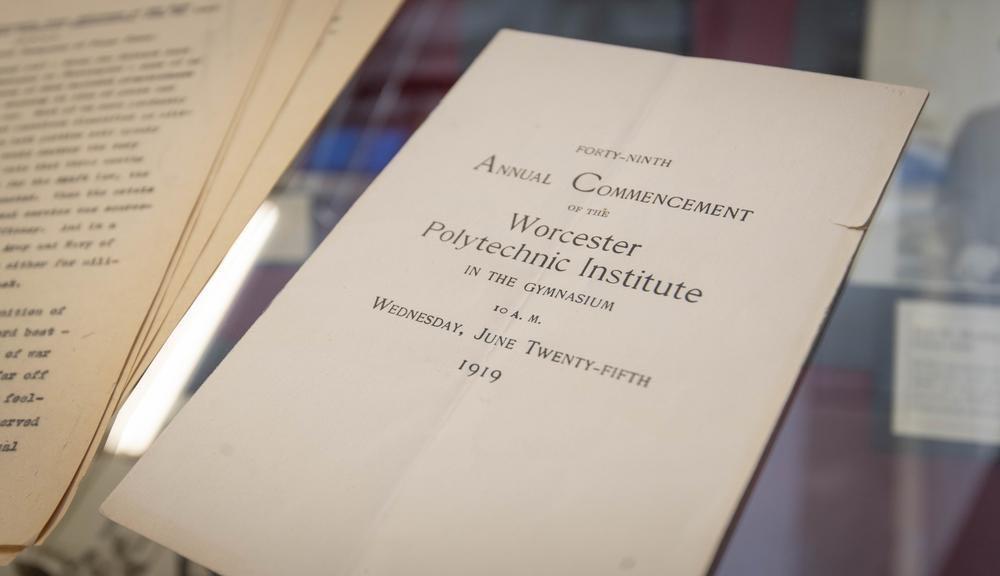 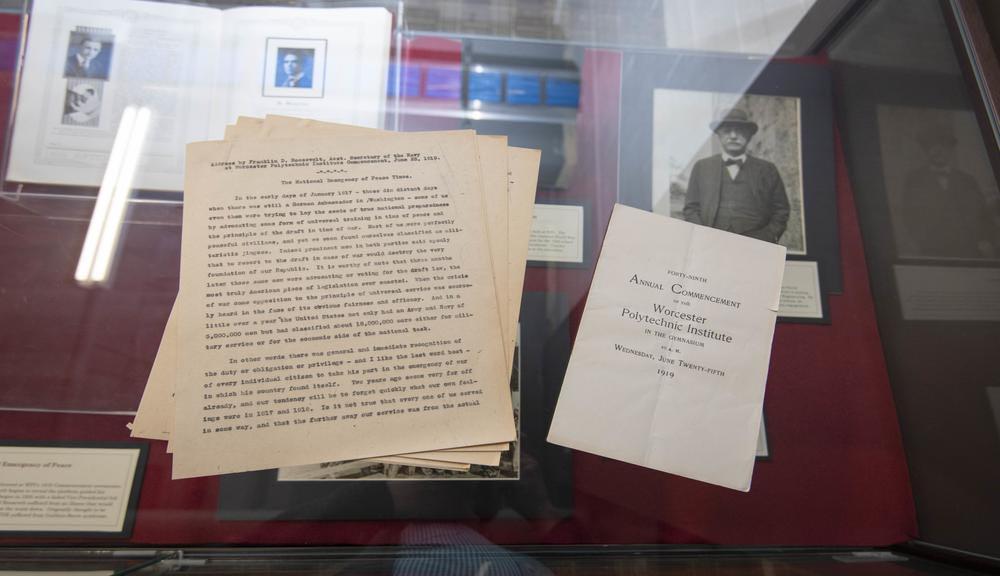