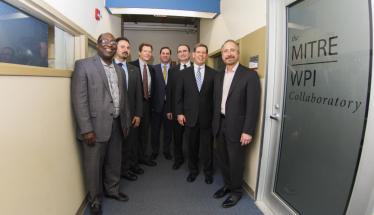 With more than 230 Worcester Polytechnic Institute (WPI) alumni working at MITRE Corp. and its top leaders having roots at WPI, President and CEO Jason Providakes explained to a group of students and faculty last week what makes WPI special.

“What is special about WPI?”  Providakes ’79, '80 (MS EE), asked. “Projects and solving problems and taking a holistic view of things.”

He admits when he attended WPI, his grades “weren’t so great,” but the opportunity to explore different classes and experiment without having to worry if he would pass the final or flunk the class was invaluable. 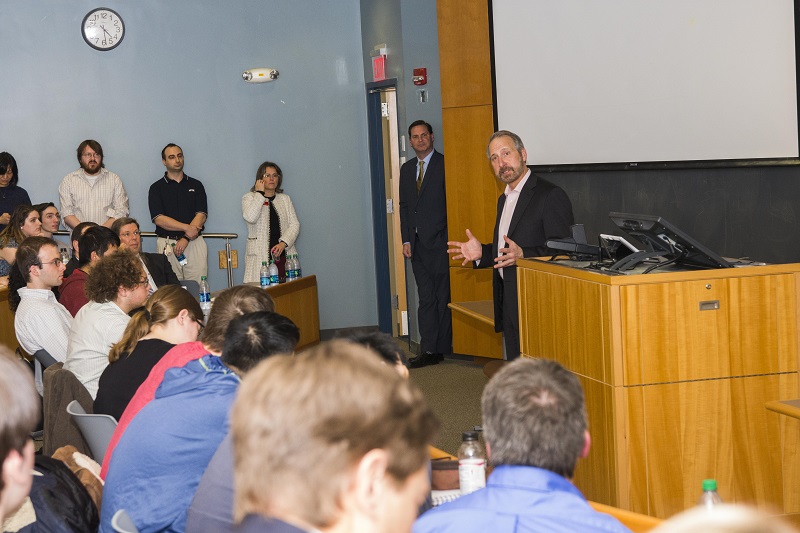 MITRE president and CEO Jason Providakes talks with
students during a Q&A session.

“To graduate, you’ve got to complete a project,” he said to the group in a classroom in Atwater-Kent after he and other company leaders toured the WPI-MITRE Collaboratory that opened last year and saw the MQP (Major Qualifying Project) work that is being supported by MITRE. Jay Schnitzer, MD, ’73, vice president and chief technology officer at MITRE, and Pete Sherlock ’82, senior vice president and chief operating officer, also visited campus and talked with students.

Providakes gave a brief talk on his work at MITRE, his professional journey, and the rewards of solving important problems in the public interest.

He leads the $1.7 billion nonprofit organization in its mission to serve the public interest as a systems engineering and applied sciences company, bringing communities together to solve large-scale and complex problems of national importance “to make the world safer.” MITRE operates multiple federally funded research and development centers on behalf of U.S. government sponsors.

“The IQP (Interactive Qualifying Project) was very powerful and made you think differently about the world,” Providakes told the students. “The project I had … there was no answer to it, but they didn’t care about the answer. They wanted to know about my approach.”

Providakes left a career in academia to take a position at MITRE, where he worked “just about every job,” he said.

“I brought with me the fundamental learning I got from WPI. I was curious—working on projects in a multidisciplinary fashion and really caring—and that stuck with me when I went to MITRE,” Providakes said. “I like solving problems and working on projects at MITRE that deliver an impact and create a safer world. 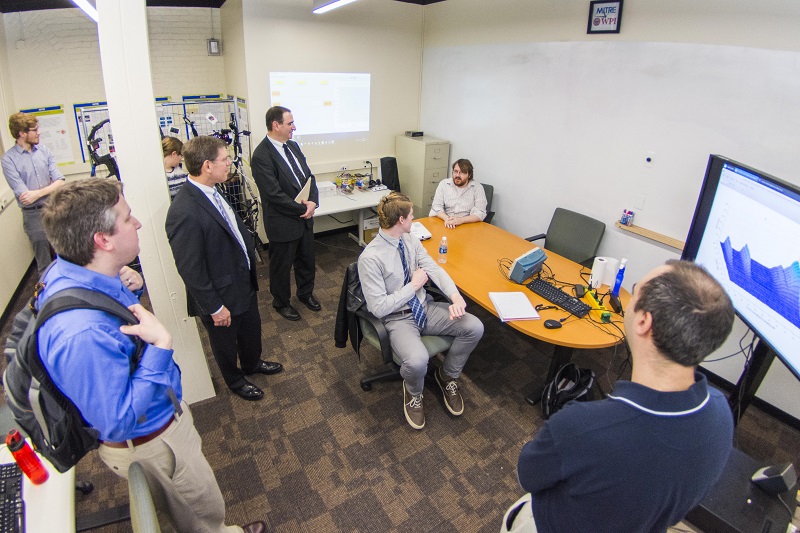 Peter Sherlock and Jay Schnitzer of MITRE, center, chat with
students in the WPI-MITRE Collaboratory.

“Use your curiosity and explore the world around you and really apply that. With the projects at WPI, you have to make connections. That’s why students from WPI who come to MITRE do so well.”

Providakes said there is currently a tremendous demand for the company to hire scientists and engineers through the WPI pipeline created over the years because MITRE and the university share many of the same values.

“It is not always what you learn in books,” he said. “You need to be creative and engaging people. It is not just about being technically smart. It is about being smart about the world around you and how to create influence in the world.”

At MITRE, he directs the organization's independent R&D program and oversees development of MITRE's corporate technology strategy, which spans its operating centers and sponsor community. Previously, as the director of biomedical sciences at MITRE, Schnitzer oversaw the organization's health transformation R&D program. Before that he was chief medical officer and senior vice president at Boston Scientific Corp., and was on staff of Massachusetts General Hospital as an attending pediatric surgeon, with a joint appointment at the Shriners Burn Hospital and a faculty position at Harvard Medical School. After receiving his BS in chemical engineering from WPI, he earned a PhD in chemical engineering at MIT, and an MD at Harvard Medical School. He is board certified in surgery and pediatric surgery.

“My daughter gives the explanation that I just can’t hold a job very well,” Schnitzer joked.

He said he always believed in the future of life sciences and research, and positioned himself and his career in that direction.

“That is where MITRE is going,” he said, with projects that include how to better predict what new cancer therapies will be most successful and how to prevent drones from getting into civilian places.

He encouraged the students to join MITRE’s collegiate embedded capture-the-flag competition at its Bedford campus—an embedded security competition where participants try to create a secure system and learn from their mistakes. (WPI won the first one, he pointed out.)

“I brought with me the fundamental learning I got from WPI. I was curious—working on projects in a multidisciplinary fashion and really caring—and that stuck with me when I went to MITRE.” - MITRE president and CEO Jason Providakes

Sherlock—who joked that when he follows Schnitzer in presenting, his bio makes him feel like an underachiever—recognized his niece in the audience, a first-year student at WPI.

“It is another case of the tight WPI relationship,” Sherlock said. “You all selected WPI because you are interested in the project focus and the mission focus at WPI to do meaningful things with an interdisciplinary focus. These are all attributes and things we at MITRE share. It is no surprise there is a very close relationship with WPI and MITRE for a number of years, and in the past five years it has gotten much stronger through collaboration, projects, interns, and hires.”

He added that a few years ago, MITRE and WPI began a fifth-year master’s degree program that allows graduate students to complete their master’s work while working at MITRE.

“MITRE is a great place to begin a career,” Sherlock said. “I started my career at MITRE right after I received my master’s at WPI. Today, it [MITRE] has a lot more and is more diversified than it used to be.”

There is a diverse age mix in the workforce, he said, with a quarter of the staff working in Boston in their early career and the rest at various levels of experience.

MITRE has a veterinarian on staff, lawyers, doctors and nurses, people who worked in special operations in the military. “You name it, we have one on staff at MITRE,” Sherlock said. “We know what we are doing is important to society, family and country.  … It is rewarding and there is variety and you can build a career and stay with the same company.”