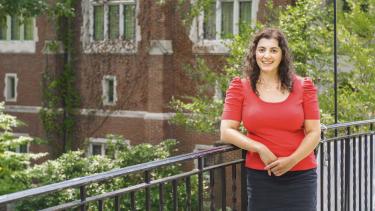 WPI’s Relationship with MITRE Puts Student on Path to Success

As a sophomore, Cecelia Franzini ’14 (BS ECE), ‘15 (MS ECE) took the first few steps down what would ultimately become her career path.

hat’s when Sergey Makarov, co-director of the MITRE Project Center, asked her to participate in a round of interviews he was lining up for some of his students with colleagues from The MITRE Corporation, a not-for-profit organization based in Bedford, Mass. that operates research and development centers sponsored by the federal government.

Franzini agreed and was offered a competitive internship with MITRE during the summer of 2012.

“The people at MITRE were friendly, knowledgeable, and willing to help,” said Franzini. “As an intern, I was able to take on interesting work that was useful to the project I was working on, so it was nice to see my work have an impact. I was an intern treated as a valuable employee.”

Franzini enjoyed her experience so much that she returned to MITRE for a second summer internship and completed her Major Qualifying Project (MQP) at MITRE during her senior year. After earning a bachelor’s degree in 2014, she continued to work at MITRE part-time while completing her master’s thesis on waveform design for a ground-penetrating radar.

“It was helpful when working on my thesis to not only have regular meetings with my advisor on campus, but also get support from people on site at MITRE,” said Franzini.

Franzini graduated with her master’s degree in May 2015 and immediately began working as a full-time employee at MITRE. She currently has the title of electrical engineer but will be able to explore several career options.

“I'll be working on a variety of projects over the next couple of years so that I can see the types of work available in my department. Eventually I'll choose an area of work to focus on. Right now, I'm working on some antenna design,” said Franzini.

Two internships, one MQP, and several research projects later, Franzini says she feels lucky she found an organization where she feels comfortable, challenged, and can make an immediate impact. She credits her WPI education and the focus on project-based education for preparing her to succeed and perform in the workplace.

“All of my classes taught me how to approach, think about, and solve problems, which are valuable skills that can be applied to any field of work. Overall, it's been a valuable experience - I got to learn something new in an encouraging environment, and it allowed me to continue and strengthen my engagement with MITRE,” she said.

MITRE has had a longstanding relationship with WPI; more than 120 alumni currently work at MITRE, including president and CEO Alfred Grasso ’93 and Peter Sherlock ’82, senior vice president for programs and technology in MITRE’s Center for National Security.

Last year, as part of the company’s efforts to create stronger partnerships with universities near its Bedford campus, MITRE chose three local schools with which it already had strong ties to make even stronger connections. According to MITRE, WPI was chosen because of its track record of producing top-notch engineers and scientists who come in with the technical and professional skills that allow them to easily integrate into their work environment and make immediate contributions.