If the enthusiastic reaction the recent launch of the MITRE-WPI Collaboratory received is any indication of success, this new dedicated collaboration space holds promise of untold innovation.

Partners for years, WPI and MITRE Corp., a Bedford-based federally funded research center for various government agencies, including the Department of Defense and the Federal Aviation Administration, have a long tradition of working together. The MITRE-Bedford Project Center is the most well-known example, but the recent opening of the dedicated space in Atwater-Kent deepens the partnership, and gives students, faculty, and MITRE employees a place to work together at WPI.

“This is a place dedicated on campus,” says associate professor of electrical and computer engineering Alex Wyglinski, director of the Collaboratory and the project center. “We have resources from MITRE and WPI, and now we have a place where MITRE people can go to when they are on campus.”  Wyglinski sees the launch as the beginning of opportunities for students to work closely with MITRE personnel on projects that have meaningful, real-world impact. 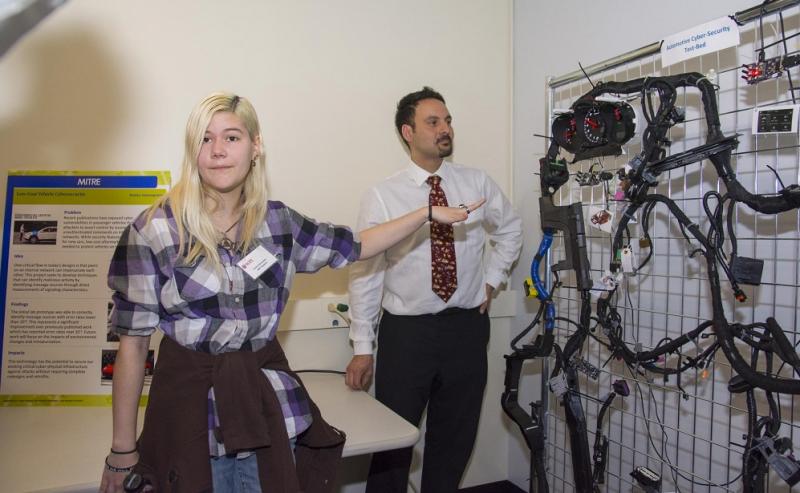 Determined to make the space useful for all, Wyglinski says that while the space is an excellent resource for students doing MQP work, many other students and faculty will work in the space for different projects.

By the time students get to the MQP, says Wyglinski, they have a good understanding of their interests and where they want to go after graduation. If they are working with MITRE, many could even have a job lined up once they graduate. But, he says, the collaborative is also for students who haven't reached that point, and even for students and faculty in other disciplines. Students can work on Independent Study Projects as early as freshman year in the collaborative, getting an opportunity to access the brainpower and equipment normally reserved for later in their college career.

Two years ago, Wyglinski spent his sabbatical time at MITRE to better understand the challenges and problems in industry. “Ultimately, that's where our students go,” he says, noting that many already did MQPs at MITRE. But Wyglinski saw promising opportunity for the two to merge their resources.

“This is a first for both MITRE and WPI,” he says, noting that because of the similar philosophies and goals, WPI is the obvious go-to university for this partnership.

Using the entire electrical system of a 2015 Chevy Impala, the two demonstrated how easy it is for a vehicle's radio to be hacked, giving nearly instant control of the rest of the operating system (brakes, steering) to an outsider.

The two are developing an affordable, reliable system to detect and halt malicious activity, so owners can continue to drive safely and then have the vehicle assessed. For Hernandez, the project bridges her two interests. “Especially for autonomous vehicles,” she says. “Autonomous vehicles are really big robots.”

WPI students also connect with alumni who are now MITRE employees. Cecelia Franzini '15 (BS/MS ECE), now an engineer at MITRE, talked about the importance of the partnership and the interplay between the hands-on student experience and professional expectations. “The project work at WPI was very useful,” she says. “To some extent, it teaches you how to teach yourself, even with working with people and scheduling.”

Currently, Wyglinski says, eight to ten projects are running that will use the space and shared resources. Projects include the aforementioned cyber threat to vehicles, and another MQP at MITRE focuses on hacking radar. Students have the benefit of working in the space where valuable loaner equipment can be stored safely, and where seasoned personnel can hear ideas, see projects, and offer advice, all while gaining knowledge and inspiration from the students.

“That's why a dedicated space is so important,” he says. “They can sit down in this cool facility and use the equipment. Everything has a place. The big thing is really connecting with people who might have been unaware of this before. This will really help people think outside the box.”