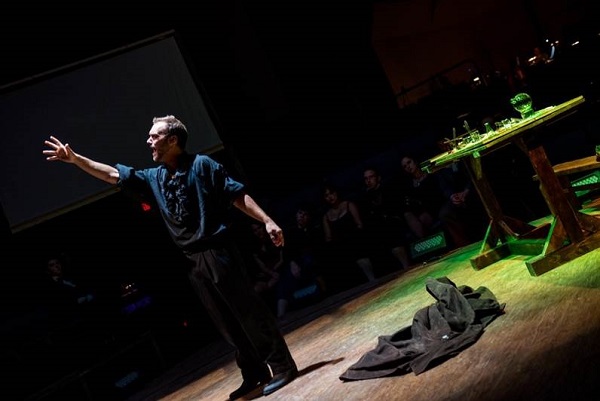 Joshua Croke played the parts of Jekyll/Hyde in the show.

Moss Hart was a dramatist and director, known for his wit, sensitivity, and unconquerable enthusiasm for life, and for his work in the theatre. According to the NETC website, in giving the award in his name, the group seeks to encourage artistic growth and the highest standards of excellence in theatre.

VOX members were notified of their win via email on Sept. 12. Upon receiving the news, John Delorey, director of choral music, remarked, “This award means a lot to me and the students for many reasons.  One, mounting a musical of any size is a huge project, and producing a show of such caliber demands a tremendous amount of work from the actors, designers, and crews.”

“The show was a concept piece that I tried to make an extremely immersive experience for the audience.” – Stage director Kristy Chambrelli

By NETC design, the award has a two-fold purpose: To honor the memory of Moss Hart and to recognize and encourage outstanding theatrical productions that present affirmative views of human courage and dignity. Adding to his comments about the students’ accomplishment, Delorey says, “To be recognized for their hard work is very satisfying. The award also acknowledges the concept and design of the show.”

Stage director for Jekyll & Hyde Kristy Chambrelli has high praise for the troupe’s members. “The groups of students we have worked with have definitely evolved over the years. Our student designers are stronger now than we could have ever originally imagined.”

Chambrelli designed the production of Jekyll & Hyde. “The show was a concept piece that I tried to make  an extremely immersive experience for the audience,” she says. “The show was in the round on a man-powered revolve, which gave us some insight to the struggles of the common man of that period. The entire cast, with the exception of Jekyll/Hyde, behaved like a Greek chorus and stayed on stage all night.” 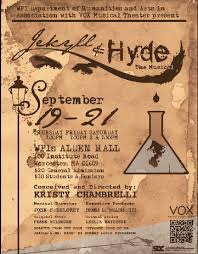 Speaking further about the design of this awarding-winning production, Chambrelli adds, “The audience was seated in raised banks of seats looking down on the action like an old operating theatre. There was a high-level projection concept, which served as both scenic elements and the inside of Jekyll’s thoughts. His transformations were aided by the actor controlling the image on one of four screens. We used IR [infrared] cameras found on Microsoft Kinect to pick up the actor in various sets of circumstances.”

The Moss Hart Memorial Awards will be presented at the 63rd New England Theatre Conference Annual Convention and Festival, happening Oct. 23–26 in Westford, Mass. Chambrelli says that she and Delorey will attend the banquet, where they will be presented with the award. “The form of which I do not know much about,” she says. “I do know that we will retain the title for one year.”

When asked what the award means for VOX, Chambrelli says, “People always say to me: ‘You do musical theatre at a tech school?’ John and I both think that musical theatre is more than just jazz hands and great belting. I want to tell great stories and find a way to make the audience see things differently. I really think that it is part of the key to the success and growth of the program over the past decade.”