If there’s one thing that comes across when speaking with Steve Marsh, it’s how happy he is to be on the WPI campus.

“There was no hesitation in applying for this job. I jumped at the opportunity,” says Marsh, a former Massachusetts State Police trooper, who retired after 25 years of service. “I’m in awe of WPI: the research that’s done here, the students, faculty, staff. The students at WPI are in the community, around the world. They’re making a positive difference in people’s lives before they even graduate, and that’s an amazing thing to be part of.” 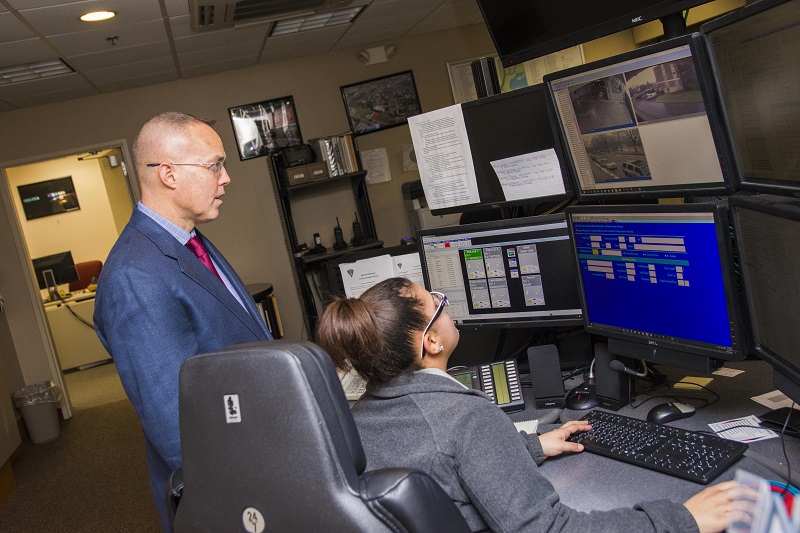 Marsh’s move to a campus is quite a change for someone who used to investigate serious and fatal motor vehicle accidents, who authored state police policy on the issue of cruiser and officer nighttime visibility, and who taught crash investigation and incident management at the state police academy. “You’ve got the best of both worlds here,” he says. “The university and the campus police department are highly regarded.”

WPI Police Chief Cheryl Martunas says she was seeking a new deputy chief with “strong leadership oversight, and a strong skill set, balancing both analytical and research capabilities.” She adds, “It was evident throughout the interview process that Steve would be an exceptional fit for the department and the university. His background involving state resources will be valuable in expanding our operation capabilities and emergency/service responses.”

In fact, as a state trooper, Marsh researched and studied data to develop ways of increasing cruiser and police visibility and safety following the death of a trooper who was struck while parked on the roadside. Marsh designed a fluorescent and reflective jacket that met specifications higher than those required by ANSI regulations. The jacket was more comfortable for officers to wear, leading to safety garments being worn more often, and increasing officer safety and ensuring compliance with state and federal regulations.

In his role at WPI, Marsh will be “instrumental in the oversight of the command staff and in guiding the department toward stronger critical incident and crisis response initiatives,” Martunas says, adding that Marsh and the rest of the department will work to maintain the department’s accreditation.

Meanwhile, Marsh has wasted no time becoming familiar with the campus. On one recent afternoon, he ate lunch here with his son Chase, 12, noting how they met several students and Dustin Deren, executive chef of retail dining. Exemplifying his friendly demeanor, Marsh was sure to note how helpful everyone was that day, adding, “It’s an honor to be part of this community.”