Colleges and universities are a lot of things, but at their core they are communities—places where people work, learn, play, and live.

At WPI, campus police play a foundational role in making that sense of community possible by helping students, faculty, and staff feel safe and supported. Since 2005, WPI Director of Public Safety and Chief of Police Cheryl Martunas has led that effort, shaping the department into what it is today. Over the holiday break, Martunas will officially retire, closing the books on her time at WPI and her four decades in law enforcement.

Deputy Chief Stephen Marsh, who joined WPI in January 2018, has been promoted to Chief and will assume his new role in the first week of January.

In an interview, both Martunas and Marsh said they share a vision for the department that builds on a philosophy centered on the well-being of all members of the WPI community and focuses on building lasting relationships that extend beyond typical policework.

“Our goal is to help in the development and success of students who attend WPI,” Martunas said, which naturally includes the well-being of faculty and staff. “We’re not just here to respond to incidents and make arrests. How do we develop those relationships, how do we resolve a matter, how do we keep people growing, attending school and working on campus in a positive way? That’s how we know we’re successful, when we can contribute to that.”

Marsh said Martunas understood that approach at a very high level while never losing sight of smaller details. He expects that, under his leadership, the department will continue to engage with the community, making positive interactions from the time students and parents come on campus for admissions tours to when they come back to campus as alumni.

It’s not the big case you solve, it’s the everyday things. The student who needs a ride down the street. Just a conversation. A coffee. But it’s also being responsive and being there to support others.

“To see those students walking across the commencement stage every May is such an exhilarating part of the year, because we were able to take an active role,” Marsh said. “We have students going all over, doing great things, making huge impacts in people’s lives all over the world. As members of the WPI Police, if we can help them when they are here, then we’ve played a part in that.”

Campus policing presents unique challenges, Marsh said. The population is constantly in flux, with 1,300 new students—many of whom are away from home for the first time—arriving every fall. And some of those students come from places where they had very different experiences with police, he said, adding that the department needs to be sensitive to those perspectives.

Likening the department to a spoke in a wheel with the WPI student as the hub, Marsh agreed with Martunas that while keeping the community safe is the department’s primary mission, there are other aspects of campus life to consider.

Both Martunas and Marsh said they take pride in WPI’s designation as a fully fledged department with police powers granted through the state police. The department has sought out and received accreditation from the Massachusetts Police Accreditation Commission since 2015, and recently received re-accreditation for another three years.

Achieving Accreditation is a highly prized recognition of law enforcement professional excellence and can only be obtained after a period of self-assessment and certification.

Of the roughly 250 participating law enforcement agencies, WPI Police is one of only 15 college and university police departments in the state that have achieved accreditation.

She has been a really good partner to have at the table. 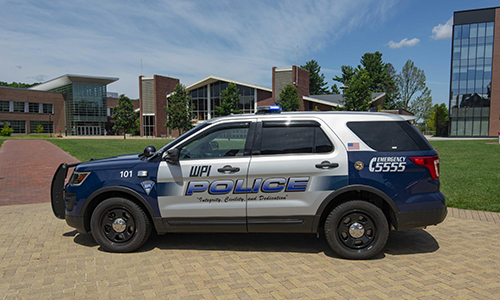 For his part, Marsh described Martunas as “a wonderful human being and a mentor” and said that under her guidance he has grown into his role at WPI after a career spent on the region’s highways with the Massachusetts State Police.

WPI’s Police Department includes about 25 full-time staff and a handful of part-time employees, and is the only university department that is staffed 24 hours a day, seven days a week, 365 days a year. As chief, Martunas said she focused on being there for whatever the community needed.

“We’re there for our community for the smallest things,” Martunas said. “It’s those small things that really make us who we are. It’s not the big case you solve, it’s the everyday things. The student who needs a ride down the street. Just a conversation. A coffee. But it’s also being responsive and being there to support others.”

“Before we are police officers here, we are community members,” added Marsh. “That goes to the core of our service—that we want the best for all members of our community.”

One door closed, others opened

Originally setting her sights set on becoming a Worcester police officer, Martunas started her law enforcement career as a police service aide for the Worcester Police Department. When that program—which used the aides to handle routine calls to free up sworn officers to address serious crimes—fell victim to budget cuts in the early 1980s, she took a job supervising police dispatch communications. She heard about an opening for a campus police officer at WPI and made the leap.

“Once I got a taste of the campus atmosphere—that community feel—I said, ‘there’s a career here,’ and that’s what I stuck with,” Martunas said.

She started her law enforcement career in 1982 as the first woman on WPI’s force and became the department’s first female sergeant. She left WPI in 1994 to build her skills through leadership roles  at Dean College in Franklin and Quinsigamond Community College. She said she was “recruited back” to lead the WPI’s department in 2005. .

“When I left, I kind of had in my head that I’d be back,” Martunas said in a recent interview. “That’s how much I thought of WPI. I think WPI molded me as a young officer.” 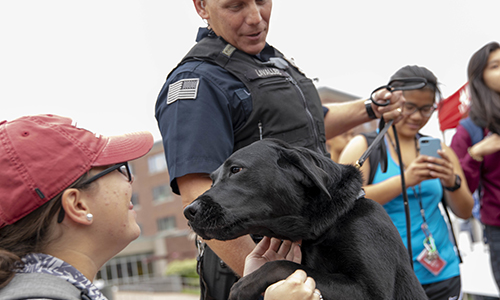 Philip Clay, senior vice president for student affairs, said Martunas leaves WPI with a legacy of commitment to community policing and modernization that makes Marsh well-positioned to lead the department. He said she was instrumental in developing an emergency management structure at WPI that incorporates a unified command under the leadership of emergency management director Ronald Bashista.

Clay also noted that Martunas brought the department its first K-9 unit in 2016; when Bella the black Labrador retriever is not training and conducting sweeps for explosives ahead of major events on campus, she can be found receiving ear scratches and pats while out and about on campus with Officer Brian Lavallee, making students and employees alike more comfortable connecting with campus police.

“You couldn’t have a better ambassador than Bella,” Clay said.

Clay said he has enjoyed working with Martunas; he met her when he came to WPI in the early 1990s, near the end of her first stint with the university. She struck the right balance between law enforcement, risk management, and sensitivity to the human component of every issue, he said.

“She always approaches every situation with a level head, with a spirit of partnership, and insight in terms of her own background,” Clay said. “She has been a really good partner to have at the table.”

Martunas was also skilled at building up a robust command staff that included Marsh. The promise Marsh showed when he first arrived on campus has been backed up with performance, Clay said.

“Deputy Chief Marsh’s background in the Massachusetts State Police informs his approach to problem solving, situational analysis, and how he works with people," he said. “He has grown into his role well.”